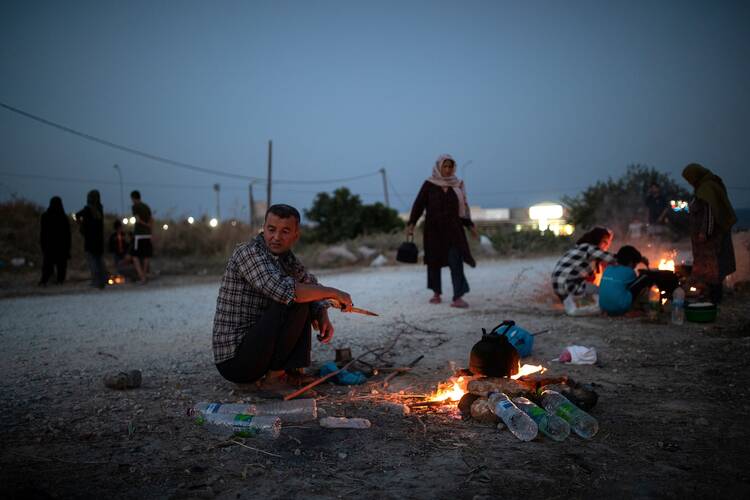 People displaced from the destroyed Moria refugee camp sit by fires along a road on the Greek island of Lesbos Sept. 15, 2020. The camp, which was mostly destroyed in fires Sept. 9, was home to at least 12,000 people, six times its maximum capacity of just over 2,000 asylum-seekers. (CNS photo/Alkis Konstantinidis, Reuters)

The director of Greece’s Catholic charitable organization said the situation on Lesbos island remains tense after a fire at a refugee camp left thousands homeless.

“The situation remains chaotic, as the government tries to bring the refugees into a new camp, with reassurances they’ll be looked after,” said Maria Alverti, director of Caritas Greece.

“But we don’t know what will happen if they don’t comply. Part of the local population is reacting in a more extreme way to the presence of so many refugees. There are reports of local groups patrolling the streets, taking the law into their own hands, with cases of violence against aid workers.”

A fire on Sept. 9 at Camp Moria left thousands from Syria, Iraq, Afghanistan and 70 other countries sleeping on streets and beaches.

In an interview on Sept. 16 with Catholic News Service, Alverti said police and army units had closed roads to prevent refugees from converging on the island’s main town, Mytilene.

However, she added that the mood had changed among local Greeks, with clashes erupting as efforts were made to “protect one population from the other.”

“Some [refugees] believe they’ll stand a better chance of relocation if they don’t register at the new camp, so there’s confusion and tension,” Alverti said. “Some locals think NGOs like ours are part of the problem, and we’ve been stopped in our cars and asked what we’re doing and where we’re going.”

Jesuit Refugee Service: “Conditions at Moria had become a tragic symbol of current European policy that is unable and seemingly unwilling to provide decent and safe conditions for refugees.”

Long before the fire conditions at the camp had been widely deplored by humanitarian aid workers. The overcrowded, underequipped Camp Moria, had an official capacity for just 2,800. Its population had been as high as 20,000 refugees, a number reduced to about 12,000 at the time of the fires. After attempts were made to quarantine camp residents infected with the coronavirus, a struggle within Moria ended with alleged acts of arson that soon sent thousands fleeing its tents and makeshift shelters.

In a statement released on Sept. 9 officials from Jesuit Refugee Service-Europe said: “Overcrowded and undignified, the conditions at the Moria camp had become over the past years a tragic symbol of current European policy that is unable and seemingly unwilling to provide decent and safe conditions for refugees.

“The destruction of the camp by fire now serves as the latest confirmation of the crisis of European responsibility towards those seeking asylum,” JRS said. “The inhumane situation in which thousands of asylum seekers were stranded at the gates of Europe had to be solved long ago.”

JRS officials added: “To bring an end to the shameful conditions on Lesbos and other Greek islands and to ensure that such tragedies will not reoccur, a European solution that includes relocation to other European countries is needed. The upcoming New Pact on Migration and Asylum must be the start for a meaningful reform of EU Asylum and Migration policy that truly respects the values of the European Union.”

The European Union is due to issue proposals to overhaul the bloc's migration policy next week in an effort to end years of division among member states. As a frontier state, Greece is pressing for increased participation by other EU members in relocation schemes—unpopular with many central and East European countries—but has also suggested that alternative obligations may be assigned to countries wishing to opt out of relocation.

Speaking at a debate in the European Parliament on the situation in Greece, EU Commissioner for Home Affairs Ylva Johansson said that “there can be no more Morias” and that it was time for a fresh start on migration.

Several EU members have offered to take in refugees from Greece, led by Germany which says it will take in 1,553 refugees from Greek island camps who have had their asylum applications approved. Catholic bishops in Germany, Austria and other countries urged a policy change to allow more refugees to be accepted by the European Union.

Alverti said Greek authorities were cooperating well with Caritas, which runs an office on Lesbos, but cautioned that a new refugee camp, set up with army help within four days of the fire, still needed resources if it was not to recreate conditions at Camp Moria.

“For years, we spoke up about how Moria was shaming Europe, and no one would listen. Unfortunately, it took a fire for the EU and Greek government to do something,” Alverti said.

“As a Catholic organization, we sometimes offer a different perspective when speaking out. But while our church is generally supportive, I’m not sure how much its message is really heard.”

Lesbos island is separated from Turkey by the Mytilini Strait and is actually closer to Turkey than to the Greek mainland.

Turkey reopened its border to refugee departures in February, after accusing the EU of reneging on a 2015 agreement to help the estimated 3.6 million refugees on its territory. That move caused a sixfold increase in arrivals in Greece.

EU rules require asylum-seekers to stay in the country where they first applied for asylum unless another European country is willing to host them. With the COVID-19 pandemic, the transfer of asylum-seekers to other facilities in Greece and around Europe stopped.

In August, Caritas-Greece said increased police, army and navy patrols had reduced the refugee influx, but cautioned at least 32,000 were stranded on Lesbos, Chios, Samos and other islands, facing food shortages, abuse and violence.