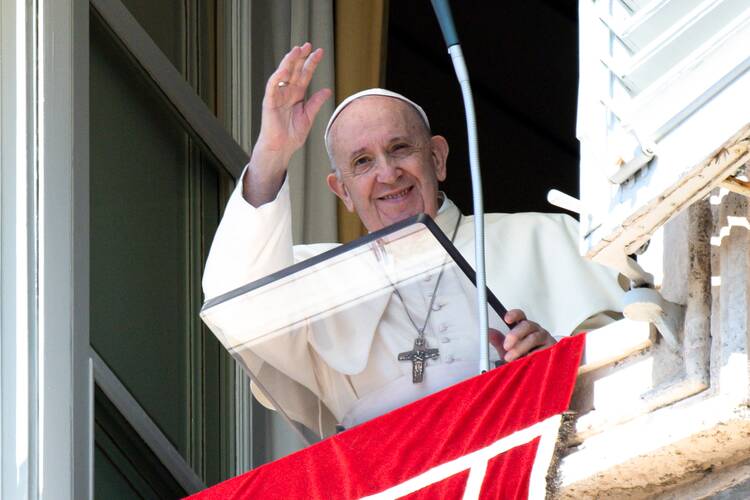 Pope Francis greets the crowd as he leads the Angelus from the window of his studio overlooking St. Peter’s Square at the Vatican Sept. 6, 2020.

VATICAN CITY (CNS) -- While the COVID-19 pandemic has put the brakes on most foreign travel and many in-person meetings, Pope Francis still has some major events on his fall 2020 agenda.

The United Nations celebrates its 75th anniversary with the opening of its annual General Assembly Sept. 15; Pope Francis is expected to be among the world leaders addressing the assembly with a prerecorded video.

The key date on his calendar, however, is Oct. 3, the day he will travel to Assisi to celebrate a private Mass and sign his new social encyclical on the practical obligations that flow from "human fraternity" or all people being brothers and sisters by virtue of being created by God.

Two major texts are rumored to be on the pope's desk awaiting final approval: the apostolic constitution on the reorganization of the Roman Curia; and the long-promised report on how Theodore E. McCarrick, the former cardinal and archbishop of Washington, was able to advance so far in the church despite apparent allegations of sexual misconduct and even sexual abuse of minors.

The Vatican ordered McCarrick's removal from ministry in June 2018 after an investigation found credible allegations that he sexually abused minors. A month later, Pope Francis accepted his resignation from the College of Cardinals and in February 2019, the pope dismissed him from the priesthood.

Because of the COVID-19 pandemic, there are no foreign papal trips on the books for the foreseeable future. The trips take months to plan and organize, including advance visits by the chief trip organizer, Vatican security and the papal master of liturgical ceremonies.

In addition to international travel being largely curtailed because of the pandemic, the Vatican said in mid-July that Msgr. Mauricio Rueda Beltz, who had been the papal trip organizer since late 2016, had been transferred to the apostolic nunciature in Lisbon, Portugal. The Vatican has made no announcement about his successor.

The Vatican had announced a papal trip to Malta and Gozo for May 31, but the trip was canceled due to the pandemic and no new date has been announced. He also was expected to go to Budapest, Hungary, for at least one day of the International Eucharist Congress Sept. 13-20, but COVID caused the congress to be postponed a year to Sept. 5-12, 2021.

Pope Francis also was supposed to visit Assisi March 26-28 for a meeting with young economists and entrepreneurs from around the world. The meeting was part of a project called "The Economy of Francis," which is inspired by St. Francis of Assisi, but also by the teaching of Pope Francis.

Although the March meeting in Assisi was postponed, the young adult participants and an international team of economists, business leaders and theologians have done a deep-dive into the theme, meeting online over the course of months to discuss ways they can promote an economic system and businesses that encourage sustainable development, model solidarity, fight injustice and inequality and protect the environment.

Organizers, which include the city and the diocese of Assisi and the Focolare Movement's Economy of Communion project, had rescheduled the Assisi meeting for Nov. 19-21, but were forced to make it an online meeting; however, it is still scheduled to include input from Pope Francis.

What happens when a pandemic grounds a globe-trotting pope?
Nicole Winfield - Associated Press

As of Sept. 2, the pope has resumed holding his weekly general audience with visitors and pilgrims present. The event, for the time being, is held in the courtyard of the Apostolic Palace with about 600 people present. The Vatican has not said when he will resume inviting a small congregation to his weekday morning Masses.

Pope Francis had said the transfer from the young people who hosted WYD in Panama in 2019 to their Portuguese peers, who will host the event in 2023, would take place on the feast of Christ the King, Nov. 22. The Vatican has not confirmed that still is the plan.

There is little or no chance Pope Francis will announce new cardinals in 2020; in addition to the pandemic making an international gathering of cardinals almost impossible, the College of Cardinals will have more than its limit of 120 members under the age of 80 until Cardinal Donald W. Wuerl, retired archbishop of Washington, celebrates his birthday Nov. 12.

However, big changes could be on the horizon for close to a dozen cardinals who work in the Roman Curia or hold senior posts.

While cardinals can vote in a conclave until they are 80, they are required to offer their resignations at 75.

Pope Francis can and does ask some cardinals to continue in office, but with or without a document on curia reform, some of the long serving prelates are likely to step down.

Cardinal Mauro Piacenza, head of the Apostolic Penitentiary, celebrates his 76th birthday Sept. 15. Cardinal Robert Sarah, prefect of the Congregation for Divine Worship and the Sacraments, turned 75 in June. And in July, Cardinal Stanislaw Rylko, archpriest of the Basilica of St. Mary Major, reached retirement age.