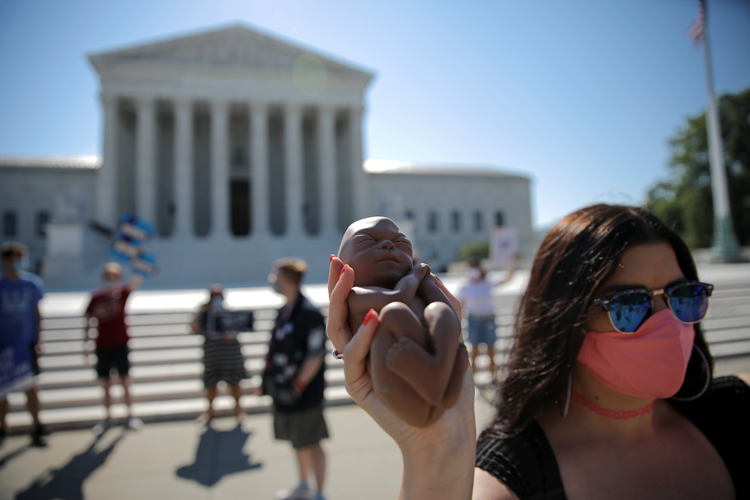 A pro-life activist holds a replica of a fetus outside the U.S. Supreme Court in Washington June 29, 2020. (CNS photo/Carlos Barria, Reuters)

WASHINGTON (CNS) -- The chairman of the U.S. bishops' pro-life committee Aug. 20 praised the National Institutes of Health's Human Fetal Tissue Research Ethics Advisory Board for its decision to withhold funds from 13 of 14 research proposals that involved the use of fetal tissue.

Archbishop Joseph F. Naumann of Kansas City, Kansas, chairman of the U.S. Conference of Catholic Bishops' Committee on Pro-Life Activities, said the bishops applaud the Trump administration "for moving NIH in a direction that shows greater consideration for medical ethics in research, and greater respect for innocent human life."

"It is neither ethical nor necessary to further violate the bodies of aborted babies by commodifying them for use in medical research," he said in a statement. "The victims of abortion deserve the same respect as every other human person. We are grateful that the administration is following through on its commitment to end federal funding of research using aborted fetal tissue."

The 15-member NIH advisory board, which issued its report late Aug. 18, was established Feb. 20 by the Department of Health and Human Services "to advise, consult with and make recommendations to, the secretary of HHS regarding the ethics of research involving human fetal tissue."

“It is neither ethical nor necessary to further violate the bodies of aborted babies by commodifying them for use in medical research.”

The board met July 31, with part of the meeting open to the public. HHS Secretary Alex Azar, who appointed the board's members, has the final say on their recommendations.

On a 9 to 6 vote, the board recommended funding a study that will use fetal tissue to try to validate whether an alternative model works as well.

The report said one of the board members noted strengths of the proposal were "its attempt to improve an existing model" and the fact "investigators are planning to use preexisting HFT (human fetal tissue) stored in a biorepository and collected according to guidelines, with no need to acquire additional tissue for the planned studies."

"If successful, the research will obviate the need for HFT in future models," it said. "Given this, some members of the board thought that the justification of the use of HFT to achieve the proposed aims (including the amount of HFT) was ethically sufficient."

The board is chaired by Paige Comstock Cunningham, who is interim president of Taylor University in Upland, Indiana. She is currently the executive director of the Center for Bioethics & Human Dignity at Trinity International University in Deerfield, Illinois.

Members include Father Tadeusz Pacholczyk, director of education and staff ethicist at the National Catholic Bioethics Center in Philadelphia; David A. Prentice, vice president and research director for the Charlotte Lozier Institute and adjunct professor of molecular genetics at the John Paul II Institute of The Catholic University of America in Washington; and Dr. G. Kevin Donovan, director of the Pellegrino Center for Clinical Bioethics Georgetown University in Washington and a professor of pediatrics at the Jesuit-run university.

The decision to fund or to withhold funds for the proposals came in a simple majority vote.

Two board members asked that a dissenting opinion be included in the report for the record: "This board was clearly constituted ... so as to include a large majority of members who are on the public record as being opposed to human fetal tissue research of any type."

"This was clearly an attempt to block funding of as many contracts and grants as possible, even those responding to the NIH solicitation for proposals to the notice: "characterizing and improving humanized immune system mouse models," which the two dissenting board members said "required comparison of current humanized mice made with human fetal tissue to proposed models that do not use human fetal tissue."

They added, "The outcome of the board’s deliberations are thus clear-cut and will paradoxically fail to reduce the use of human fetal tissue in the development of humanized mice needed for therapy development including for COVID-19."

In response to release of the report, Carol Tobias, president of National Right to Life, said: "It is appropriate that tax-funded research be reviewed in regard to the ethical nature of the research."

"These tiny humans are aborted and exploited when they are farmed for their organs and tissue for use in research projects," she said in a statement. "Ethical alternatives are available."

The department also issued a $20 million grant for research to develop models that do not rely on human fetal tissue.

HHS released a statement saying that "promoting the dignity of human life from conception to natural death is one of the very top priorities of President (Donald) Trump's administration."

Provide feedback on this article
Join the conversation: Login or create an account
Before you can comment, you need to update your profile to include your first and last name, as required in our comments policy. Then reload this page and you'll be set up for commenting. Update your profile
Advertisement
More: Health Care / Abortion / Pro-Life