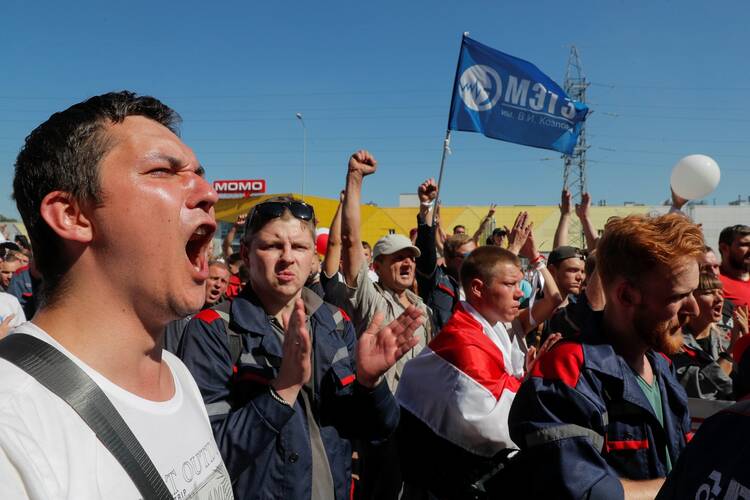 “The beating of peaceful demonstrators who want to know the truth, their cruel treatment and inhumane detention, is a grave sin on the conscience of those who give criminal orders and commit violence,” Archbishop Tadeusz Kondrusiewicz, bishops’ conference president, said in a message to government authorities. He urged the Belarusian government to begin a “constructive dialogue with society” and “immediately release all innocent citizens detained at peaceful rallies.”

In a message read in churches nationwide Aug. 16, the bishops said: “Blood has been shed in an active confrontation, leaving many physical and moral victims, including peaceful and innocent people of all ages.”

“The Catholic bishops of Belarus condemn every act of violence committed by brother against brother. We therefore call again for an end to unnecessary aggression, and for dialogue for humanity and society,” said the statement, which included a prayer for “turning armed conflicts into peace.”

The Belarusian bishops’ website said some priests had tried to intervene with security forces, who were reported to have detained more than 6,700 nationwide by Aug. 17.

“The Catholic Church strongly condemns, and will continue to condemn, the detention of priests and clergy of all denominations who, during peaceful rallies, have the right to be with their truth-seeking people as pastors,” the bishop said in a statement on the church’s news website.

“We call on representatives of the authorities and law enforcement agencies to respect the position of clergy and their flock, who act peacefully in accordance with conscience in the name of the people’s freedom.”

The website said Catholics has joined “chains of solidarity” in various towns, while many churches had stayed open all night.

Up to 200,000 people joined a demonstration Aug. 16 in the capital, Minsk, a week after Belarus’ official commission awarded President Alexander Lukashenko his sixth election win, with 80.1% of votes against the 10.1% of his nearest challenger, Svetlana Tikhanovskaya, a 37-year-old teacher who fled to neighboring Lithuania after the ballot. On Aug. 17 Tikhanovskaya said she would act as interim leader pending the release of political prisoners and fresh elections.

Lukashenko, in power since 1994, was jeered during an address at a Minsk tractor plant Aug. 17, as state TV staff joined civil servants and factory workers in a mass walkout.

The pope urged “respect for justice and rights” during his Aug. 16 Angelus prayers in Rome and said he was following the situation.

Earlier, Father Antoni Gremza, vice chancellor of Grodno Diocese, told Poland’s Catholic Information Agency, KAI, that people were “in a state of panic and powerlessness,” and afraid to leave their homes and attend church in case they were randomly beaten and arrested by police and troops.

He added that Catholics had been attacked while leaving the local cathedral and forced back inside by officials who “saw everyone as enemies” and “accepted no arguments.”

Preaching Aug. 15, the feast of the Assumption, at Naroch, Archbishop Kondrusiewicz said the “violence of law enforcement agencies” had combined with “growing immorality, social injustice and corruption” to fuel an “unprecedented sociopolitical crisis.”

He added that a “long spiritual conversion” would be needed to restore public trust in Belarusian authorities, “whose task is to protect people, not brutally beat them.”

In a homily the same day, Auxiliary Bishop Yury Kasabutski of Minsk-Mohilev praised the role of women in the protests.

“In today’s harsh sociopolitical situation, we see our women praying for an end to bloodshed and for peace,” the bishop said. “We see women winning by the power of love and faith — brave women who aren’t afraid to take to the streets of our cities to confront lies and violence. These women are the heroes of our time.”

Catholic leaders in Poland, Ukraine, Germany and other countries, deplored the violence.

The Conference of European Justice and Peace Commissions called on Christians across Europe to recite the Lord’s Prayer Aug. 18 “so truth, justice and peace may prevail.”

“The crackdown on civil rights and freedoms has intensified; this alarming situation poses a serious threat to justice and peace not only in Belarus but in the entire region,” the Aug. 16 statement added.