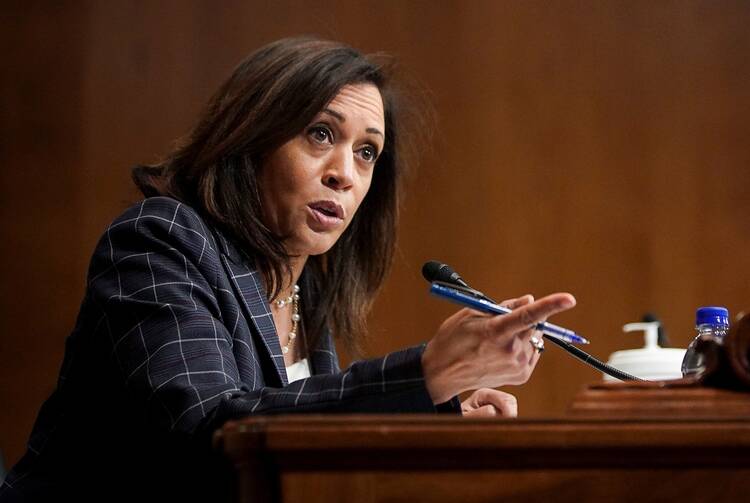 “This is headline news. It’s the first of its kind,” said Dominican Father Aniedi Okure, executive director of the Africa Faith and Justice Network, about the choice of Harris, the first Black vice presidential nominee of a major political party.

“Given what the country has been going through lately, with the fallout from (the killing of) George Floyd,” Father Okure told Catholic News Service, “it is something that’s pointing in the right direction, if I may use the word. The United States is an inclusive community. All of this is happening, and things are getting better in that sense. So I think really it’s something to look forward to,” he added, noting, “They haven’t won yet.”

“I was so elated. We, the community, need good news, and this was just wonderful,” said Donna Toliver Grimes, associate director of African American affairs in the U.S. bishops’ Secretariat of Cultural Diversity in the Church. “She wasn’t my top candidate in the primaries, and she wasn’t my top pick for vice president,” she added, but after considering the announcement, “she’s really deserving and brings a lot to the table.”

Black Catholics should look at Biden and Harris for “policy that is favorable to people on the margins. If I say ‘for African Americans,’ it benefits other people on the margins as well,” Grimes said. “That’s a concern to deal with this voting-rights, voter-suppression issue. “I would expect he (Biden) would put good people in his Cabinet, who would not damage the agencies, or ignore the mission,” Grimes said.

“I’m really hoping that he can do something about health care reform. It’s not A vs. B, single payer vs. whatever. Whatever the Affordable Care Act was intended to do, let’s correct that, let’s improve that, and let’s get people the health care that they need. See what happens with that coverage and how it can be improved, not what it’s like to lose your health care, or to have the restrictions people have now.”

Critics of Harris pointed to her support for legalized abortion.

“Sen. Harris supports a policy of abortion on demand at anytime, anywhere and under any circumstances,” said an Aug. 11 statement by Carol Tobias, president of National Right to Life, noting that Harris has a 0% rating from NRLC but a 100% rating from NARAL Pro-Choice America.

“By selecting a running mate who is staunchly pro-abortion and anti-religious liberty, Joe Biden has once again made it clear that his self-styled ‘Catholic identity’ is something which can be cast aside whenever it’s politically expedient,” said an Aug. 11 statement by Brian Burch, president of CatholicVote.

Sherilyn Pruitt was a college classmate of Harris’ at Howard University in Washington, one of the nation’s most prestigious historically Black colleges, and both pledged to the Alpha Kappa Alpha sorority.

“She was always involved in political activities and she was protesting against apartheid,” Pruitt said, recalling that Harris, now 55, ran for Howard’s student council as a freshman.

Contrary to the stereotype, there was no sorority house for Pruitt and Harris. But to bond, Alpha Kappa Alpha conducted service projects such as feeding the homeless. ” The thing about black sororities and fraternizes, you’re a member for life, and he focus is on service and making the world a better place,” Pruitt said.

The bond certainly took with Harris’ and Pruitt’s “pledge line.” “We go on an annual girls’ weekend once a year. We go away together, and we have a listserv where we keep each other informed about our lives. It’s a way that we support each other. She’s up with what everybody’s doing. About 15 of us in the Washington, D.C. area” — including Harris, given her Senate seat, Pruitt said.

As the daughter of an India-born mother and a Jamaica-born father, Harris went to both Baptist churches and Hindu temples until her parents divorced when she was 7 years old. Afterward, Harris grew up going to churches of other Christian denominations. Her husband, Los Angeles lawyer Douglas Emhoff, is Jewish; they married in 2014.

Harris, in the first Democratic debate in 2019, attacked Biden for his stance on busing in the 1970s, but was a quick backer of the eventual nominee when she dropped out of the race before the first primary contest. But Rep. Tulsi Gabbard, D-Hawaii, in another debate, attacked Harris for her record as California’s attorney general.

According to OpenSecrets, Harris’ top contributors during her political career include the University of California, Alphabet Inc., Warner Media Group — now owned by AT&T — and the Walt Disney Co.