Trump policies and Covid-19 could lead to undercounting the Latino community in U.S. census 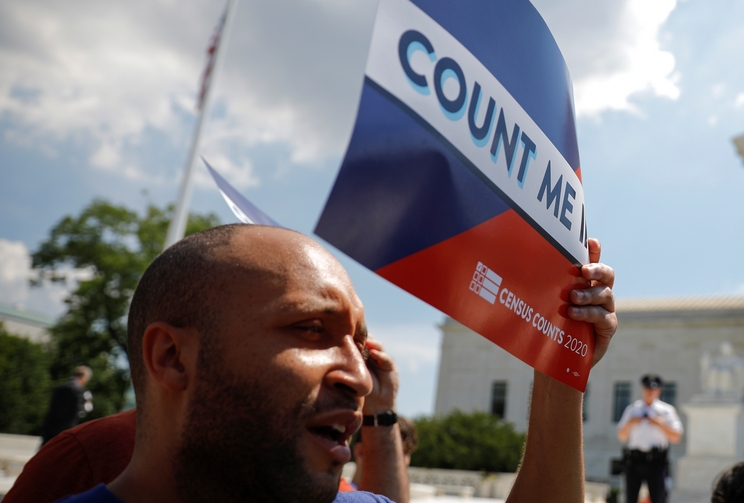 A protester holds a sign outside the U.S. Supreme Court on June 27, 2019, after the court ruled against adding a citizenship question to the 2020 census. (CNS photo/Carlos Barria, Reuters)

The idea came to María Franco when her dryer broke. She had not been to a laundromat in years, but as she waited for her clothes to dry, she saw a diverse cross-section of the community, reading magazines, talking and lining up at the vending machines.

“The foot traffic was incredible,” she said. Ms. Franco is a board member of the Chicago-area Coalition for Spiritual and Public Leadership, a Catholic nonprofit not officially affiliated with the archdiocese, and is a co-chair of its census committee. Her team is encouraging participation in the U.S. census in minority neighborhoods, a complex effort during the pandemic.

Following up on her revelation, Ms. Franco organized an event with coffee and doughnuts to promote the census at a Melrose Park laundromat one morning. “People kept coming. It started spreading by word of mouth,” she said. In two hours, they helped 25 households fill out a census form, counting more than 75 people.

“Our most trusted places were shut down,” Ms. Franco said, naming churches, schools and libraries. “But no pandemic is going to stop us.”

“It’s important to meet people where they are,” Ms. Franco said, explaining that her events usually include a boombox with music chosen for each community. In English and Spanish, organizers will say, “I count. You count. We all count,” Ms. Franco said.

The census, which is conducted every 10 years, is used to allocate much federal funding, as well as congressional and state legislative seats. On Aug. 3, the Census Bureau announced that all counting efforts for the 2020 census would end on Sept. 30, a month ahead of schedule.

“All our projects had to be restructured,” said Rosette Mamboleo, who also serves on the Coalition for Spiritual and Public Leadership’s census committee. She added that social distancing because of the Covid-19 pandemic has posed major challenges. “Our most trusted places were shut down,” she said, naming churches, schools and libraries. “But no pandemic is going to stop us.”

In minority communities, a lack of trust in the federal government has been another obstacle, she said, especially with undocumented immigrants, who have long been counted along with other U.S. residents in the census. “People are afraid, and we don’t blame them with what’s going on in the news,” Ms. Mamboleo said. It helps when they reach out to communities in their native languages, she said.

Ms. Mamboleo said communities often do not trust the government because they do not see leaders responding to their needs. “But we explain to them that [this is] why participating is so important,” she said. Ms. Mamboleo also encourages community members to self-report to avoid census workers knocking on their doors. The prospect of having government workers come to homes can be frightening, particularly in the undocumented community.

“Our goal is to bring back that trust and confidence, which is really difficult with what the White House is trying to do.”

In July, President Trump issued a memorandum to exclude undocumented immigrants from the census, which could have the effect of reducing federal funds and legislative seats in areas with large numbers of undocumented residents. While this directive is expected to face legal challenges, Mr. Trump said it “reflects a better understanding of the Constitution and is consistent with the principles of our representative democracy.” While it was blocked by the Supreme Court, Mr. Trump tried to add a question about citizenship status to the census last year.

“Our goal is to bring back that trust and confidence, which is really difficult with what the White House is trying to do,” Ms. Franco said. The police are another issue, she said, noting that when some police officers try to help at an event, they unintentionally frighten some away. “It stinks because police should be seen as protecting us,” she said.

Encouraging community members to participate includes educating them about the benefits of the census, offering to help fill out the form and assuring them filling it out will not have any personal repercussions, she said.

“Some people are dead set against it because they want to sock it to the government,” Ms. Franco said. “So we explain it’s for the community. This is the way you can make yourself count.”

Overall, the Census Bureau is reporting that Cook County—where the coalition operates—currently has a 63 percent self-response rate, with 53 percent of all households responding via the internet. In 2010, the county saw a 66 percent self-response rate. But, Ms. Franco said, rates vary from one neighborhood to the next, with more affluent neighborhoods tending to have higher rates of participation.

The Urban Institute, which issued a report in 2019, before the pandemic, estimated that the 2020 census would undercount the population by 0.27 percent to 1.22 percent. That equates to an undercount of from 900,000 to more than four million people. The institute estimates that Black and Latino communities could be undercounted disproportionately, by around 3.5 percent compared to an estimated 0.03 percent undercount of the rest of the population. Native American populations also tend to be undercounted.

The Urban Institute estimated that the 2020 census would undercount the population by 0.27 percent to 1.22 percent. That equates to an undercount of from 900,000 to more than four million people.

Maria Marquez, who serves on the census committee with Ms. Franco, said that you can tell what neighborhoods are undercounted by the potholes in the street.

“This is a one-in-10-year chance to say we are minorities and we are increasing in number,” she said. “Even if you’re undocumented, you count. You have a right to be counted. Something that takes 10 minutes to fill out affects how many representatives you have in Congress.”

The coalition started podcasts in English and Spanish to inform the community on why the census matters, Ms. Marquez said. They have also created a page to address myths and common fears.

Isaac Cuevas, the director of the office of immigration affairs for the Archdiocese of Los Angeles, said the census count in his area has been just under the average. “Digital outreach definitely helped,” he said, noting the ability to fill out the census both online and over the phone in addition to the mail-in option.

Who counts? The 2020 census faces a tough recovery from Covid-19.
Kevin Clarke

But things started slowly, Mr. Cuevas said. In April, when the census would normally begin, the country was dealing with Covid-19. “It would have sounded tone-deaf to talk about anything but the pandemic,” he said. But in May and June, things started to pick back up. The church was a big part of it, helping with canvassing and promotion in the community.

“The way things are and how political things have been, a lot of people want answers, whether it’s matters of race or defunding the police. And there’s an understandable aversion to anything official coming from this administration in some communities,” Mr. Cuevas said. “We’re encouraging everyone to participate. It’s the right thing, the Catholic thing to help people participate in the census. We’re trying to restore a sense of community, and this is a part of that.”