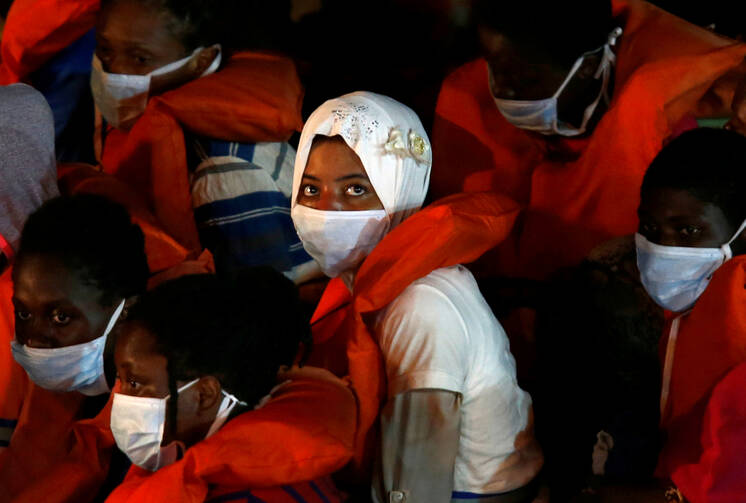 Rescued migrants look out from an Armed Forces of Malta vessel upon their arrival in Valletta, Malta, Aug. 3, 2020. (CNS photo/Darrin Zammit Lupi, Reuters)

VATICAN CITY (CNS) -- The coronavirus pandemic has complicated the situation of migrants and refugees, but it has not stopped people from seeking safety and a better life abroad, and it has not diverted the Vatican's attention from their plight.

Pope Francis announced Aug. 5 that he was beginning a series of talks at his weekly general audience focused on Catholic social teaching, which undoubtedly will include reflections on the ancient obligation to welcome and assist "the stranger."

While the pope has at heart the plight of migrants and refugees everywhere in the world, he cannot ignore the situation closer to home -- the thousands of people still crossing the Mediterranean or stuck in European reception centers because the pandemic halted most resettlement and repatriation programs.

The Italian government reported Aug. 4 that with the end of the strict lockdown June 1, it had resumed charter flights to repatriate migrants and refugees who had entered the country without proper authorization. As of Aug. 3, it said, 116 people were flown back to Tunisia and 103 were taken back to Albania.

But the numbers are tiny compared to the number of people who arrived in Italy during and after the lockdown, either by boat or by rescue ship.

From Jan. 1 to Aug. 5, the internal affairs ministry reported, 14,838 migrants and asylum seekers had arrived in Italy. During the same period in 2019 -- when Matteo Salvini, then-minister of internal affairs, closed ports to rescue vessels and enacted strong policies to keep migrants away -- only 4,021 migrants had arrived.

Even at the height of Italy's strict COVID-19 lockdown this spring, migrants arrived. The government said 241 newcomers came in March and 671 arrived in April.

The numbers went up timidly in May and June, but jumped to 7,068 arrivals in July, indicating that many had been waiting in North Africa for a chance to set off.

Pope Francis celebrated Mass July 8 with the staff of the Migrants and Refugees Section of the Dicastery for Promoting Integral Human Development. The liturgy marked the seventh anniversary of his first-ever papal trip outside Rome -- a trip to the southern Italian island of Lampedusa, which is where many migrants and refugees crossing the Mediterranean come ashore.

As he celebrated the anniversary Mass, the government-run migrant reception center on Lampedusa already had exceeded its capacity. And as the number of newcomers grew, the Italian government knew it had to do something, especially because the overcrowded conditions made the center a potential super-spreader hotspot for COVID-19.

The internal affairs ministry put out bids for ships that could provide temporary housing for the migrants. At the beginning of August, the government transferred 300 Tunisians to the first ship -- a mega-ferry with more than 500 cabins -- and was accepting bids for the provision of a second vessel.

While containing the spread of the virus was essential, the newspaper of the Italian bishops' conference warned that some politicians and others were using the pandemic as the latest excuse to "scapegoat" migrants and refugees.

"The idea that poor immigrants bring disease is one of the most recurring and indestructible stereotypes," said the editorial in Avvenire, the bishops' newspaper. In fact, studies show that "immigration is a selective process: the most able, including from a health point of view, are the ones who go." Families pay for their passage so they can find work and send money home.

Many of the same politicians trying to whip up fear of migrants spreading the coronavirus are the same ones criticizing the government for continuing limits on tourism. In fact, Avvenire noted, in 2019 the entire European Union received 2.4 million migrants and refugees versus about 400 million tourists and visitors, showing that the chance of contagion from tourism is exponentially higher.

The Avvenire editorial also took issue with those who attribute the 2020 increase in migration solely to the departure of Salvini and his policy of refusing to allow migrant-rescue ships -- including Italian coast guard boats -- to dock.

And, in fact, in late July the Italian Senate voted -- along party lines -- to lift Salvini's immunity so that he could stand trial for abuse of office and illegal detention of migrants for blocking a rescue boat with more than 100 migrants aboard in August 2019.

The Vatican has not commented on Salvini's legal situation.

But at the Mass marking the anniversary of his visit to Lampedusa, Pope Francis said that when looking at "journeys of hope, rescue operations and cases of rejection," Christians must remember that Jesus said, "Whatever you did for one of these least brothers of mine, you did for me."