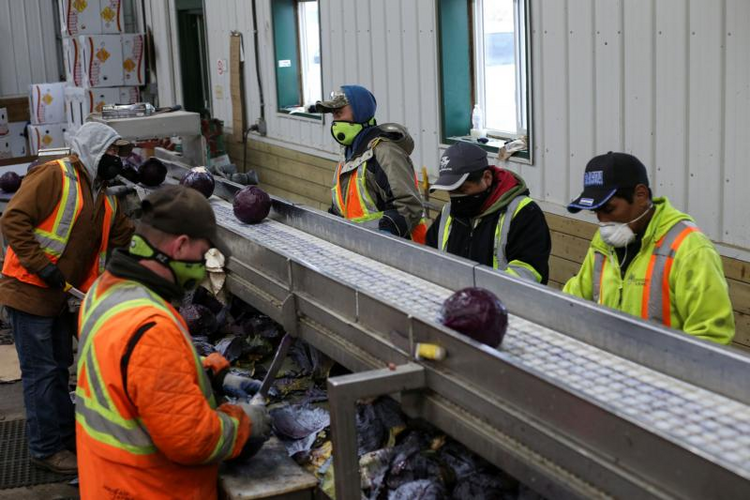 DUBLIN (CNS) — The coronavirus pandemic “opened our eyes to the peripheries in our midst,” specifically to the contribution of migrant workers in essential services such as health care, transportation, sanitation and agriculture, said Cardinal Michael Czerny.

The undersecretary of the Migrants and Refugees Section of the Dicastery for Promoting Integral Human Development noted that, “paradoxically we had to be as shocked and stuck” during lockdown before “our eyes began to open.”

On World Day Against Trafficking in Persons July 30, the Canadian prelate took part in a webinar, “Overcoming Indifference to Migrants and Refugees,” organized by the international Catholic weekly The Tablet.

He told participants that many would acknowledge that it was only when people were locked down and everything came to “a grinding halt” that their eyes were opened to the fact that some of their most basic needs were being met by migrant workers.

“Here in Italy, it was a real eye-opener for people to realize how many of these people there are, the kind of work they are doing, and the kind of situation they are living in,” the cardinal said. “I have a feeling that public opinion in Italy swung in favor of migrant workers in a remarkable way over these months. Whether this is having an effect on policy, I don’t know.

“This year of COVID-19, with its terrible toll of suffering and death, may also be looked back on as a year of revelation.”

The 74-year-old Czechoslovakian-born Canadian, whose family fled their home after World War II, also suggested that the restrictions imposed on public worship during the COVID-19 pandemic had torn the church loose from some certainties or assumptions, such as the relationship between faith life and the territorial parish.

“I think COVID-19 said the fact that you live within this particular square mile does not define your faith life nearly as much as you thought. You found yourself ‘going to Mass’ somewhere much further away -- maybe on the other side of the planet -- and you found yourself relating to people in new ways that are not limited to the territorial parish.”

He wondered if the number of people drifting from the church is “an indication that this parish structure has reached a kind of limit in its functionality” and observed that COVID-19 and electronic means “conspired to give us a kick into the future that might have taken 20 or 30 more years to play itself out under more normal circumstances.”

Elsewhere in his discussion with journalist Christopher Lamb, the cardinal criticized the media for its continued emphasis on statistics and trends about migrants and refugees and for “carping on” about “the global crisis.” Refugees, he underlined, are a tiny minority of those who move every year around the world.

Discussing the rise in anti-migrant rhetoric among political leaders, he said: “One of the major puzzles of our time is that the same society that people live in decently and cooperatively seems to tolerate this kind of distortion of reality. I think it has something to do with the very rapid evolution of media, to the point that we have lost our bearings in terms of what is true, what is plausible and what is believable. The more shocking, somehow the more credible. I don’t remember shock value ever being a valid criterion for truth. Yet it seems to be that the more outrageous, the more contrary sounding, the angrier -- somehow the more credible. This is a problem for all of us, and I think it is really urgent to find a way through this.”

Part of the problem, he stressed, is that people are not hearing the human stories of migrants and refugees. If this happened, “The majority of people would realize that they are scapegoating this small number of people, who are doing exactly what all of us would do if we were in the same circumstances.”

They also would understand that this small minority who have been forced to flee their homes do not represent a threat or “a danger to our economy, our society, our civilization or our families and that there are other much more serious problems for which the politicians are responsible that they should be busy with.”

Asked what the faithful can do to concretely to overcome indifference to migrants and refugees, Cardinal Czerny pointed to Pope Francis’ 2015 appeal to parishes and religious communities to host a family. He cited Canada’s long-standing community sponsorship program, which provided his own family with the opportunity to begin their lives again after they found themselves in “an increasingly desperate situation in 1948.”