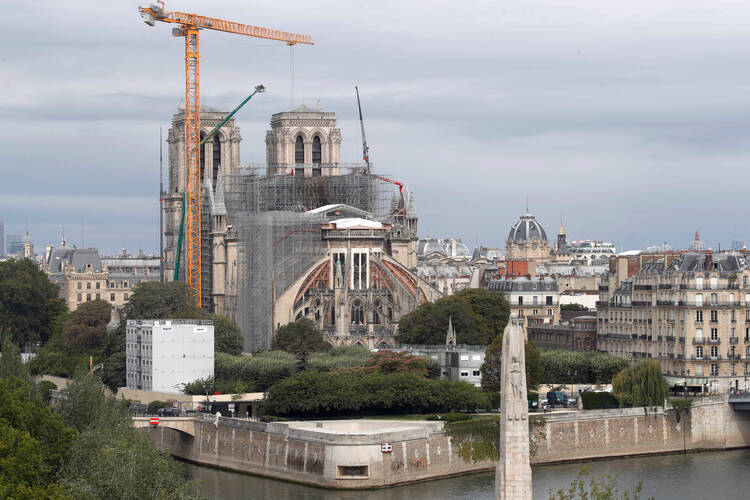 Workers remove scaffolding from the remains of the roof of the damaged Notre Dame Cathedral in Paris July 14, 2020, after the historic cathedral was partially destroyed in a 2019 fire. A new study has found that the amount of lead that settled to the ground and likely seeped into houses downwind of the fire was far greater than officials indicated at the time. (CNS photo/Charles Platiau, Reuters)

LIMA, Peru (CNS) -- When the Notre Dame Cathedral in Paris went up in flames in April 2019, images were made even more dramatic by thick smoke tinged with yellow as the 460 tons of lead on the roof and spire melted.

After the fire, French officials said the lead did not pose a health hazard, and relatively few families followed up on a government offer to test their children's blood for the metal. But some environmental activists were sharply critical of the way officials handled the possible contamination.

Now a new study has found that the amount of lead that settled to the ground and likely seeped into houses downwind of the fire and within about half a mile of the cathedral was far greater than officials indicated at the time.

"I knew there was a controversy. I knew there were mixed reports on the government reaction," geochemist Alexander van Geen of the Lamont-Doherty Earth Observatory at Columbia University in New York City, who led the study, told Catholic News Service.

Accompanying his wife on a two-month sabbatical in Paris early this year, he took advantage of daily walks to collect soil samples from parks, under trees, planters and even cracks in the sidewalk.

French government-funded studies estimated that about 330 pounds of lead were deposited between about half a mile and about 30 miles downwind from the fire, and that more probably settled out closer to the cathedral. They did not estimate that larger amount, however.

Van Geen's calculations show that about a ton of lead probably ended up on the ground, on sidewalks and streets, and filtering into buildings in a 50-degree arc within 0.6 mile downwind from the cathedral.

Although officials initially downplayed risk from lead exposure, cleanup work was stopped after environmental activists raised concerns. It resumed after crews were given equipment to protect them from toxic substances at the site, including lead.

In June, when the French government offered to check children's blood for lead, about 80 children were tested. None had levels above 5 micrograms per deciliter of blood, the maximum allowable limit for children set by the U.S. Centers for Disease Control and Prevention.

Lead is known to affect children's cognitive and neurological development and can cause other health problems. Very young children are at particular risk, because their brains and bodies are still developing, and because they are most likely to play on contaminated floors and put objects into their mouths.

"They did a lot of testing, but it all happened too late," he told CNS. "In this situation, it's the dust on the table where the child is going to eat -- that's what matters."

Officials recommended wiping surfaces clean of dust, but did not issue a strict warning, and their recommendations may not have reached low-income residents, van Geen said.

"They could have been proactive," visiting the houses most likely to be affected, especially those where children lived. The fact that they did not "was inexcusable," he said.

The study, published July 9 in the scientific journal GeoHealth, highlights the importance of having teams that can react quickly in cases of fires or other disasters that release toxic substances. It is also crucial to let residents know of risks immediately, something that is made easier by smart phones, he said.

Van Geen has investigated the environmental health impacts of lead, arsenic and other metals in countries around the world. His studies have included lead from a smelter in the Peruvian Andes, where the Catholic Archdiocese of Huancayo has been active in pressing for a cleanup.

As work on the Notre Dame Cathedral progresses, including reconstructing the spire in its original design, "this might be a closed chapter," van Geen said of the lead pollution in Paris. Nevertheless, he added, "I still worry about the area very close to the cathedral."

Barbara Fraser - Catholic News Service
Provide feedback on this article
Join the conversation: Login or create an account
Before you can comment, you need to update your profile to include your first and last name, as required in our comments policy. Then reload this page and you'll be set up for commenting. Update your profile