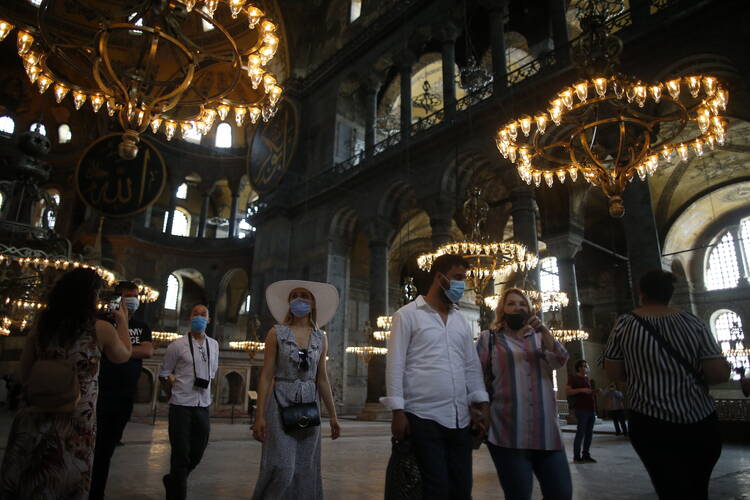 Turkey’s President Recep Tayyip Erdogan formally converted Hagia Sophia into a mosque on July 10. The Unesco World Heritage site in Istanbul, founded as a Christian church in the 6th century, transformed into a mosque in the 15th century and then into a museum in 1934, will reopen as a mosque on July 24 with Friday prayers.

President Erdogan signed a decree handing over Hagia Sophia to Turkey’s Religious Affairs Presidency after the Council of State, Turkey’s top administrative court, annulled the building’s museum status and ruled that the decision in 1934 “that ended its use as a mosque and defined it as a museum did not comply with laws” of the settlement made by the foundation that handled the assets of Ottoman Sultan Mehmet II who conquered Constantinople in 1453, and opened the building as a mosque.

The move did not come without resistance from secular forces in the country and strong protests from Christian Orthodox Church leaders in Turkey, Greece, Cyprus and Russia who wanted Hagia Sophia’s status to remain unchanged as a museum. The Ecumenical Patriarch, Bartholomew I, warned recently that “the potential conversion of Hagia Sophia into a mosque will turn millions of Christians around the world against Islam.” Metropolitan Hilarion, the head of the Department for External Church Relations for the Moscow Patriarchate, said that “Any attempts to change the museum status of Hagia Sophia Cathedral will lead to changing and violating fragile inter-confessional balances, existing today.” He said, “this church is a symbol of Byzantium and a symbol of Orthodoxy for millions of Christians all around the world, especially for Orthodox believers.”

The Catholic bishops of Turkey said in mid-June that they viewed the question of the Hagia Sophia as a matter of national sovereignty, telling Catholic News Service: “Although we would wish Hagia Sophia to retain its character as a museum, it isn’t for us to intervene or even give our opinion on a decision which solely concerns the Republic of Turkey.”

U.S. State Secretary Mike Pompeo said last month the landmark should remain a museum to serve as a bridge between faiths and cultures. Unesco too had urged Turkey not to change its status without consultation, given that it recognized the building as a world heritage site.

The Associated Press reported that while the court decision “sparked dismay among Orthodox Christians,” there was jubilation outside Hagia Sophia. “Dozens of people awaiting the court’s ruling chanted ‘Allah is great!’ when the news broke. A large crowd later prayed outside it.”

Hagia Sophia (meaning “Holy Wisdom” in Greek) was originally built as a Christian church, on the site of two earlier churches, in the city of Constantinople (modern-day Istanbul) by the Byzantine Emperor Justinian. When it was dedicated on Christmas Day, 537, it was then the largest Christian church in the world. It became the seat of the Orthodox church following the schism between the Roman and the Eastern Orthodox Churches in 1054.

Ottoman rulers transformed Hagia Sophia into a mosque in 1453 when they conquered Constantinople. Then in 1935, Mustafa Kemal Ataturk, the founder of modern Turkey, promoting a secular vision of the state, transformed the Hagia Sophia into a museum, open to all faiths and not the property of any one religion. It subsequently became the most visited museum in the land, with over 3 million visitors last year.

Since then, four popes have visited Hagia Sophia: St. Paul VI, St. John Paul II, Benedict XVI and Francis in Nov. 2014. After being given a guided tour of the building, and moved by its magnificent mosaics that depict Our Lady, Pope Francis wrote in the visitors book: “That the beauty and harmony of this holy place, may help the soul rise to the Almighty, the source and origin of all beauty.”

The Vatican has not yet spoken publicly on the subject, but it is reasonable to presume that its position would coincide with that of the Catholic bishops in the country.

The BBC reported that the Russian Orthodox Church expressed regret at the Turkish court’s decision and said the decision could lead to even greater divisions. The Economist claims Mr. Erdogan is “playing religious politics,” and notes that five churches in Turkey are named “Hagia Sophia,” and four of them have been transformed into mosques in the past decade under his rule. This is the fifth and the most significant one.

“To convert it back to a mosque is to say to the rest of the world unfortunately we are not secular anymore,” Orhan Pamuk, Turkey’s Nobel prize-winning author, told the BBC.