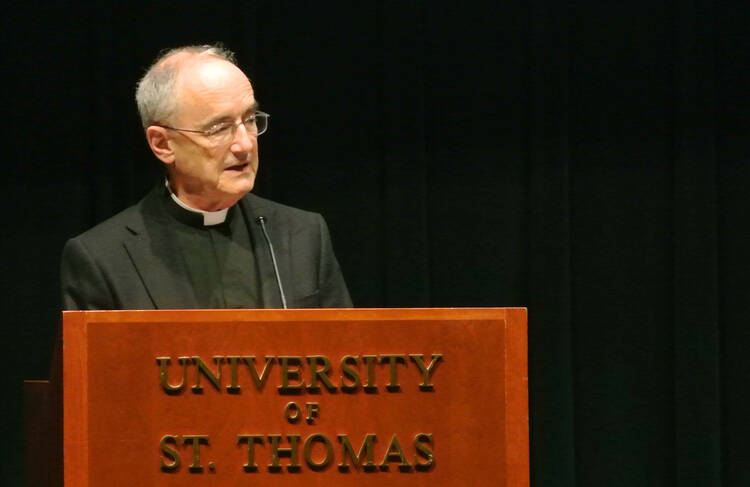 Moving quickly to strengthen the “Section for Refugees and Migrants” in the new Vatican department for the Promotion of Integral Human Development, Pope Francis has appointed as under-secretaries the well-known Canadian Jesuit Michael Czerny, S.J., and an Italian Scalabrini, Fr. Fabio Baggio.

In choosing them, Francis has opted for men with broad experience and deep commitment in the social-justice field, thereby ensuring that this office “will have teeth” in an area that he has designated as a top priority for his pontificate.

The Vatican announced the appointments on Dec. 14 and stated that Pope Francis has appointed them as his “direct collaborators” in all matters that concern refugees and migrants. Their appointments will start on Jan. 1.

Speaking to America, a clearly energized and delighted Father Czerny emphasized that the department will work directly under the pope on what has become “one of the most important and urgent human phenomena of our times,” the movement of people across the globe. “There’s hardly a place in the planet which is not touched by this phenomenon. Indeed, though many are not aware of it, there are more people moving in Russia and China today than in any other part of the world,” he stated.

He described the role of the section for “refugees and migrants” as that of “accompanying” people on the move from war zones, poverty, economically depressed areas, ethnic zones, as well as addressing xenophobia that is spreading in many countries. This new office “touches all the dimensions of human experience” of people who are on the move for whatever reason, he said.

He underlined the fact that the section will also “seek to be of help to the important groups of Catholic organizations and agencies across the globe, a great many of whom have been committed and doing magnificent work in this whole field for many years.”

Father Czerny explained that the work of the department’s section “for refugees and migrants” is intimately linked to integral human development because this development “surely starts by seeing, encountering, listening to what people are going through.”

In his address to the popular movements gathered in Rome last November, Pope Francis highlighted the drama of migrants, refugees and displaced persons. He called it “disgraceful and shameful” and said “it is, to be sure, a problem for the world. No one should be forced to flee from his or her country.” But he added, “the evil is doubled when, in these terrible circumstances, migrants fall into the clutches of human traffickers in order to cross borders. It is tripled if, arriving in a land where they hoped to have a better future, they are treated with contempt, exploited and even enslaved. Or else, they are simply not allowed to enter.”

Fr. Czerny said such situations are “the priorities” that the section for migrants and refugees would be dealing with, “including the fraudulent recruitment of migrants, human trafficking and smuggling and addressing the root causes of forced migration, as well as helping various communities and societies to welcome those knocking at their doors.” He said integral human development must begin here “with encounter and welcome.”

Fr. Czerny was born in Czechoslovakia in 1946, and joined the Jesuits in Canada in 1963. He was ordained a priest 10 years later. After gaining a doctorate in interdisciplinary studies at the University of Chicago, he founded the Jesuit Centre for Faith and Social Justice in Toronto in 1979. He was the center’s director until 1989 when, following the assassination of the Jesuits at the Central American University (UCA) in San Salvador, he moved there and became the university’s vice-rector and director of its Institute for Human Rights (1990-91).

Called to Rome in 1992, Fr. Czerny served as Secretary for Social Justice at the Jesuit headquarters in Rome for the next 10 years. In 2002, he moved to Africa as founder and director of the African Jesuit AIDS Network (AJAN), a support network for African Jesuits working to respond to the H.I.V./AIDS pandemic. From 2005-2010, he taught at Hekima College, at the Catholic University of Eastern Africa in Nairobi and also collaborated with the bishops’ conference of Kenya. He was recalled to Rome again in 2010 and since then has served as consultant to Cardinal Peter Turkson, president of the Pontifical Council for Justice and Peace, whom Francis has appointed as prefect of the new Vatican Dicastery for Integral Human Development. His appointment may also be seen as a recognition and strong affirmation of the great contribution he has made in the pontifical council for Justice and Peace.

The other under-secretary, Fr. Fabio Baggio, is a member of the Missionaries of St. Charles Borromeo. The order was founded in Italy in 1887 to work with Italian migrants in the new world. Today, the order’s priests, sisters and secular missionary women minister to migrants, refugees and displaced persons in many countries.

Fr. Baggio was born at Bassano del Grappa in Northern Italy in 1965 and joined the Scalabrini Missionaries of San Carlo in 1976. He made his final profession in 1991 and was ordained a priest a year later. He gained a doctorate in church history at the Pontifical Gregorian University in 1998.

Fr. Baggio worked as a pastor in Santiago del Chile from 1995 to 1997, and was also advisor for migrations to the Chilean bishops’ conference (INCAMI). Afterwards until 2002, he served as director of the Department for Migration of the Archdiocese of Buenos Aires. Moreover, from 1999, he also worked as national secretary of the Work of Propagation of the Faith. From 1999-2010, he taught at the Universidad del Salvador in Buenos Aires as well as the Ateneo di Manila and the Maryhill School of Theology at Quezon City in the Philippines, where he was director of the Scalabrini Migration Center (SMC) and the Asian Pacific Migration Journal (APMJ). From the year 2000 he was also professor at the Scalabrini International Migration Institute (SIMI), which is incorporated into the theology Faculty of the Pontifical Urban University in Rome. He became its president in 2013.

Fathers Czerny and Baggio are the first papal appointments to the office for refugees and migrants. It will spend the first three months of the new year in planning and reorganization of resources, Fr Czerny said.