Are Nigeria’s Christians the target of a genocide? 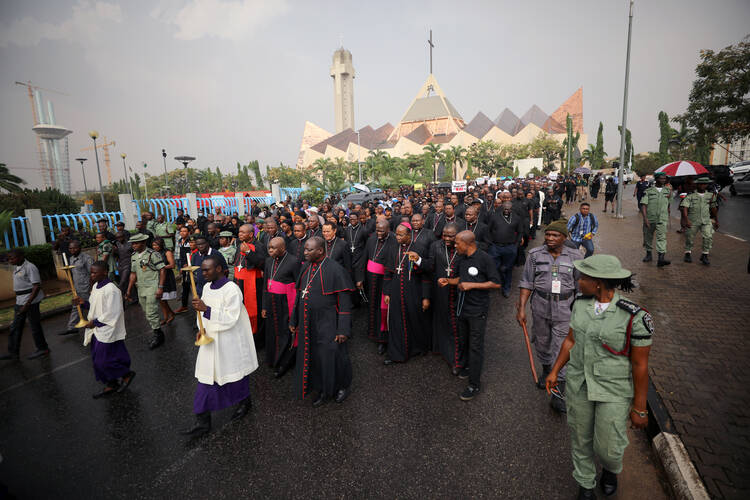 Prelates lead a protest in Abuja, Nigeria, over unending killings of Nigerians March 1, 2020. Nigerian bishops called on the international community to help the West African country in its fight against ethnic insecurity and terrorist groups such as Boko Haram. (CNS photo/Afolabi Sotunde, Reuters)

Are Nigeria’s Christians the target of a genocide? That is the conclusion of a number of religious freedom analysts and Nigerian clergy who joined a recent online press call.

Boko Haram Islamic militants have for years raged against minority Christian communities in northern Nigeria, and their intention to drive out “Western” influences and establish an Islamic state in northern Nigeria seems clear. But increasingly brutal attacks on Christian villages in Nigeria’s central “middle belt” region have been attributed to Fulani cattle herders and have been explained as the result of conflict over diminishing resources.

But advocates gathered for an online press call hosted by the international advocacy group In Defense of Christians on June 25 believe that Christians are being explicitly targeted in the ongoing violence in an effort to drive them off their land. They argued that the United States and the Nigerian central government must come up with a comprehensive plan to better protect the region’s Christians.

Frank Wolf, a former member of Congress from Virginia, bluntly denounced U.S. efforts in Nigeria so far, urging the creation of a special envoy to investigate the conflict. He said he was dismayed “for America to see genocide and not do anything about it.”

“I believe it will lead to what has happened in Darfur and Rwanda; I give Congress an ‘F.’ It has failed,” Mr. Wolf, a longtime campaigner for religious freedom, said. “Every day there is a delay…in appointing this special envoy, more people will die.”

Increasingly brutal attacks on Christian villages in Nigeria’s central “middle belt” region have been attributed to Fulani cattle herders and have been explained as the result of conflict over diminishing resources.

Gregory Stanton, the founding president and chair of Genocide Watch, reported that since 2012 attacks by Fulani raiders, Boko Haram and other militants have killed as many as 27,000 Christians in Nigeria, more than died at the hands of ISIS in Syria and Iraq.

He argued that the nature of the attacks clearly fit the U.N. definition of acts of genocide. “They now arrive with truckloads of fighters and simply massacre a Christian village and leave the Muslim village alone,” he said.

The “central government is acting like a bystander” as the attacks continue, he said.

The attacks, primarily on Christian farming communities, have been described as the result of tension over land use and traditional grazing rights. But these advocates say that narrative is belied by the clear and repeated targeting of unarmed Christians by well-armed Fulani raiders. Who is arming the attackers and what their long-term goals are remain critical issues to explore.

According to Mr. Stanton, researchers at Genocide Watch believe that Islamist extremists targeting Christian villages are acquiring weapons “from corrupt [Nigerian] army officers” and have been receiving financial support from inside Nigeria.

He believes, however, that militants may soon be able to tap into a worldwide support network among Islamist extremist groups. “Boko Haram has already said it is part of ISIS,” he said, “and we now have evidence that Fulani militias are linked up with that group as well.

“Money can come from all over the world, including the Middle East, and the danger is that this thing could blow up and become a huge problem.”

The nature of the attacks clearly fit the U.N. definition of acts of genocide. “They now arrive with truckloads of fighters and simply massacre a Christian village and leave the Muslim village alone.”

“The future of Nigeria is bleak for Christians,” said Benjamin Kwashi, the Anglican archbishop of Jos. “I have seen far more funerals than I have seen any wedding ceremonies.”

He charged that the Nigerian government has abandoned its responsibility to maintain security and protect the vulnerable. He added, “A good number of the dead are children and women, the helpless, people that rely on the protection of government.”

Archbishop Kwashi said, “This thing is systematic; it is planned; it is calculated.” He complained that “the world doesn’t want to hear that, including the Nigerian government.”

And, he said, they come to slaughter and burn, not to settle differences over land or grazing rights. “These are calculated, systematic, intentional killings of people and driving them away from their land,” Archbishop Kwashi said.

“Every time we had to raise our voices to say this is going on [government officials and human rights advocates] always produce a political narrative to say that it is farmers and herders clashing.

“That is an evil narrative to cover up,” he charged.

“The future of Nigeria is bleak for Christians,” said Benjamin Kwashi, the Anglican archbishop of Jos. “I have seen far more funerals than I have seen any wedding ceremonies.”

A report on the conflict from the International Crisis Group acknowledges the increasing role of “Jihadist groups” but indeed depicts the conflict as the result of increasing tension between herders and farming communities.

According to the International Crisis Group, the violence has killed over 8,000 people since 2011 and displaced over 200,000. Many have sought refuge in neighboring Niger. But, according to I.C.G., the “violence is rooted in competition over resources between predominantly Fulani herders and mostly Hausa farmers.”

The I.C.G. reports, “It has escalated amid a boom in organized crime, including cattle rustling, kidnapping for ransom and village raids.” The report does acknowledge that “Jihadist groups are now stepping in to take advantage of the security crisis.”

Anietie Ewang is a researcher for the Africa Division of Human Rights Watch in Nigeria’s capital of Abuja. She described the origins of the conflict between Fulani and Hausa farmers, both Christian and Muslim, as complex with roots both in competition over resources and longstanding ethno-religious tension. She said there have been attacks and reprisals between both communities and primarily blames government incapacity for the acceleration of the conflict. Crimes often go uninvestigated and unprosecuted, she said, and victims do not trust the government to bring perpetrators to justice.

But she argued that there was “nothing to suggest these are targeted attacks [against Christians], but there are religious and ethnic undertones because of the history and that cannot be taken away.”

“We are seeing violence on both sides, revenge attacks,” she said, “with very little being done in terms of investigation and protection and accountability on the part of the authorities.” She added, “When people don’t see accountability and justice being done, you have a society that becomes perceived as a kind of free-for-all.”

She said the Nigerian government must be held accountable to protect its citizens and prosecute wrongdoing but that it must also restart suspended efforts to negotiate the interests of Fulani pastoralists and Hausa farmers, addressing the underlying tensions between the two communities.

Recent statements from the U.S. State Department have deplored attacks on unprotected Nigerian villages, and Secretary of State Mike Pompeo has urged the Nigerian government to do more to protect all of its citizens.

Violence “has escalated amid a boom in organized crime, including cattle rustling, kidnapping for ransom and village raids. Jihadist groups are now stepping in to take advantage of the security crisis.”

A State Department spokesperson declined to comment on the suggestion that the attacks on Christians could be construed as acts of genocide but said that “the U.S. government helps Nigerians prevent and mitigate inter-communal conflict through our diplomacy, security assistance, police and justice reform programs, peacebuilding, dialogue efforts and development programs.”

The spokesperson, who according to standard protocol declined to be named, added, “Given the already robust U.S. government focus on Nigeria and the Lake Chad region, we do not believe that appointing a Special Envoy would add significant value at this time.”

The spokesperson pointed out that Nigeria had been placed on the State Department’s special watch list in December 2019 after “Secretary Pompeo determined that the Nigerian government engaged in and tolerated severe religious freedom violations.”

“We remain concerned by the widespread violence across the country affecting all religions and ethnic groups, including Christians,” the spokesperson added. According to the spokesperson, the United States is carrying out “a robust interagency effort to support our Lake Chad region partners to counter the Boko Haram and ISIS-West Africa insurgencies and professionalize the military and police forces.”

Despite such efforts, more is needed to improve security for Nigeria’s Christians, according to Nigerian Christian leaders.

Pointing out that the presidency and top security posts in Nigeria are held by Muslims, the Most Rev. Matthew Hassan Kukah of the Catholic Diocese of Sokoto charged that “this government has given quite a lot of oxygen to Islamist extremism.”

“We are really dealing with the fate of those who are out of power,” he said.

Noting the resource limitations of the church in Nigeria, he said it was his hope that the global reach of the Catholic Church could help focus more attention on the plight of Nigeria’s Christians.

“I would like to hear much much more from prominent archbishops in the United States and Europe,” he said.