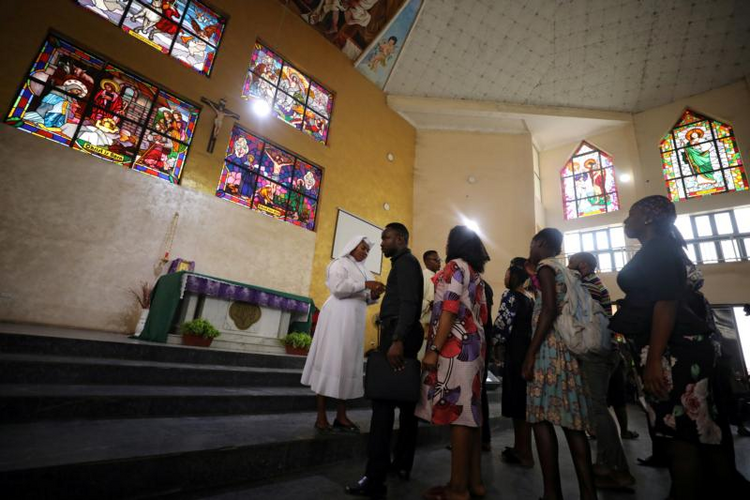 Worshippers line up to receive ashes during Ash Wednesday Mass at a Catholic church in Abuja, Nigeria, Feb. 26, 2020. In a statement that day, Nigeria's bishops called on the international community to help the West African country in its fight against ethnic insecurity and terrorist groups such as Boko Haram. (CNS photo/Afolabi Sotunde, Reuters)

LAGOS, Nigeria (CNS) -- Nigeria's bishops called on the international community to help the West African country in its fight against ethnic insecurity and terrorist groups such as Boko Haram.

"Barbaric executions of Christians by the Boko Haram insurgents and the incessant cases of kidnapping for ransom linked to the same group and other terrorists have traumatized many citizens,'' the bishops said in a statement read in churches across the country Feb. 26, Ash Wednesday.

The bishops' conference urged the international community "to come to the aid of the Nigerian government in the fight against these daredevil terrorists who want to destabilize our country."

Should they succeed, the consequences "will be grave not only for the West African subregion but also for Africa as a whole,'' said the statement, signed by Archbishop Augustine Obiora Akubeze of Benin City, president of the Nigerian bishops' conference, and Bishop Camillus Raymond Umoh of Ikot Ekpene, secretary.

Christians have been targeted by Boko Haram as well as by bandits seeking to extort money from the church.

"The level of insecurity in Nigeria today is such that whether at home or on the road, most Nigerians, in all the parts of the country, live in fear," the bishops said.

The government should "immediately put a stop to this unprecedented wave of violence and brutality aimed particularly at Christians," they said.

"We also call for the arrest and prosecution of all those behind these senseless killings that sow the dangerous seeds of hate and distrust among the various segments of Nigerian society," they said.

Also, many communities in Nigeria are continuously threatened and harassed by herders, who use violence to take land for grazing their cattle, the bishops said.

Communal violence in Nigeria is widely attributed to a decades-old cycle of conflict between predominantly Christian farmers and Muslim semi-nomadic herders, partly due to competition for arable land.

All arms of government should remember their responsibility to protect Nigerians, the bishops said, noting that, without security, there can be no peace and, without peace, there can be no development or national growth.

As Lent begins, the bishops said they "invite all Catholics in Nigeria as well as other Christians and persons of good will to unite in prayer and penance for peace and security in our country."

While "we are sad" and grieving, "we are confident that the light of Christ, which shines in our hearts, will brighten the dark corners of our Nigerian society,'' they said.

Earlier this year, a Christian pastor was beheaded after the church was unable to pay the $2.2 million demanded by the Islamic militants who had kidnapped him.

Bishop Stephen Dami Mamza of Yola condemned the Jan. 20 execution of the Rev. Lawan Andimi and, noting that another church leader was killed on the same day, said Christian leaders are being targeted.

Peter Ajayi Dada - Catholic News Service
Provide feedback on this article
Join the conversation: Login or create an account
Before you can comment, you need to update your profile to include your first and last name, as required in our comments policy. Then reload this page and you'll be set up for commenting. Update your profile
Show Comments ()
Comments are automatically closed two weeks after an article's initial publication. See our comments policy for more.