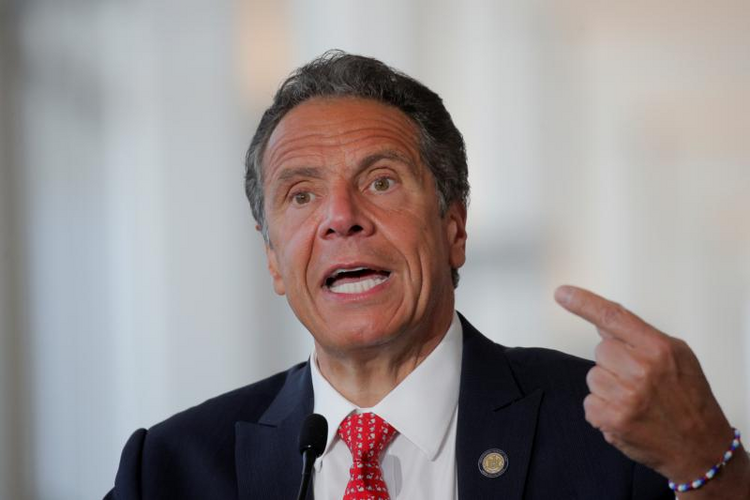 In his injunction, Senior Judge Gary L. Sharpe of the U.S. District Court for the Northern District of New York in Albany ruled that de Blasio, Cuomo and New York Attorney General Letitia James could not enforce any indoor gathering limitations against plaintiffs greater than those imposed on various businesses during the state's Phase 2 plan for reopening as the pandemic subsides.

In his order, Sharpe noted that offices, retail stores, salons and restaurants -- all now permitted to open at 50% capacity indoors -- involve the congregating of people for a length of time. Churches were limited to 25% capacity indoors.

Sharpe also said that provided the plaintiffs in the case adhere to the city and state's social-distancing requirements, the government cannot enforce any limitation for outdoor gatherings.

The plaintiffs were two Catholic priests from upstate New York, Fathers Steven Soos and Nicholas Stamos, members of the breakaway Society of St. Pius X, and three Orthodox Jewish congregants from Brooklyn, New York. They all argued the size limits violated their First Amendment rights to practice their religion.

For their part, the two priests said that under the restrictions they either had to turn away parishioners who wished to attend Mass "or to hold more Masses per day than are possible."

Thomas More Society special counsel Christopher Ferrara, an attorney for the plaintiffs, said in a statement that Sharpe "was able to see through the sham of Gov. Cuomo's 'Social Distancing Protocol,' which went right out the window as soon as he and Mayor de Blasio saw a mass protest movement they favored taking to the streets by the thousands."

"Suddenly, the limit on 'mass gatherings' was no longer necessary to 'save lives,'" Ferrara added. "Yet they were continuing to ban high school graduations and other outdoor gatherings exceeding a mere 25 people."

Cuomo later increased the crowd capacity for outdoor, in-person graduation ceremonies to no more than 150 people, which was an exemption to the 10- or 25-person limits for other outdoor gatherings, such as religious worship.

Ferrara called Sharpe's decision "an important step toward inhibiting the suddenly emerging trend of exercising absolute monarchy on pretext of public health. What this kind of regime really meant in practice is freedom for me, but not for thee."

Sharpe noted it is not "the judiciary’s role to second guess the likes of Gov. Cuomo or Mayor de Blasio when it comes to decisions they make in such troubling times, that is, until those decisions result in the curtailment of fundamental rights without compelling justification."

"There is nothing materially different about a graduation ceremony and a religious gathering such that defendants’ justifications for a difference in treatment can be found compelling," the judge wrote.

He also said de Blasio gave competing messages that supported the protest crowds while at the same time argued against large religious gatherings. These simultaneous messages, Sharpe said, "clearly undermine the legitimacy" of his argument that crowd restrictions were a matter of protecting the health and safety of the public.

Representatives of Cuomo and de Blasio said both of them were reviewing the decision.

Assistant Attorney General Eric Dreiband of the U.S. Department of Justice's Civil Rights Division said in a statement that Sharpe's decision "is consistent with positions and arguments" made by the Justice Department "in similar filings and letters, including in New York City and elsewhere around the country."

"Simply put, there is no pandemic exception to the U.S. Constitution and its Bill of Rights," Dreiband had said in an earlier statement.

Provide feedback on this article
Join the conversation: Login or create an account
Before you can comment, you need to update your profile to include your first and last name, as required in our comments policy. Then reload this page and you'll be set up for commenting. Update your profile
Advertisement
More: Coronavirus / Liturgy / US Politics