U.S. priest finds his niche working in Bangkok with poorest of the poor 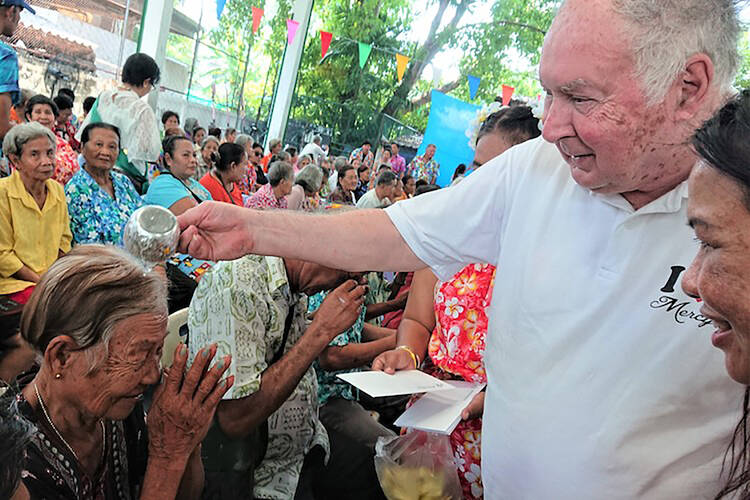 U.S. Redemptorist Father Joe Maier blesses a woman during Thai New Year festivities in 2018 at his Mercy Centre in Bangkok. The 80-year-old priest has been working in the slums of Bangkok for more than 40 years. (CNS photo/courtesy Tibor Krausz)

So it is not surprising when he explains that he comes from the "wrong side of the tracks" in his native Seattle. For that is largely where he has stayed for the bulk of the past 49 years since he settled in Bangkok after being sent by the Redemptorists to Asia on mission business.

He has built a large network of schools that tend to the poor in the heaving capital whose population, including surrounding towns, is now approaching 15 million. He also has set up shelters for abused girls and a hospice for people living with HIV/AIDS, all under the umbrella of the Mercy Centre, which he set up in 1973 with Sister Maria Chantavarodom of The Daughters of the Queenship of Mary Immaculate.

Father Maier told Catholic News Service he joined the Redemptorists as a young man, disaffected with life after a tough upbringing.

The Redemptorists have long had a major presence across Southeast Asia, focusing on Thailand, Vietnam and Laos. When he got to Thailand in 1967, Father Maier continued to question his superiors.

"I didn't really fit, whatever it was, maybe they said, 'Joe you drink too much,' so they sent me to northeast Thailand and then to Laos, and when I came back to Bangkok (in 1972), they sent me out to the slums."

It was in the slums of Bangkok that Father Maier found his calling, and it is where he remains today, working with the poorest of the poor.

"In those days, there was no refrigeration in the markets in Bangkok, so they set up slaughterhouses right in town near the markets so they could kill the pigs at night and take them straight to the market in the early morning."

The slaughterhouse where Father Maier set up his first school was in Khlong Toey, home to the city's most famous sprawling wet market where one can buy pork, chicken and an abundance of seafood along with acres of fruit vegetables.

Many of the Mercy Centre's schools are makeshift and outdoors, on building sites that cater to the children of the vast army of migrant workers who hail largely from Thailand's poorer, border neighbors: Myanmar, Cambodia and Laos. Estimates of total workers and their families run as high as 4 million people. They come to Bangkok and other Thai cities and seaside islands to work for 12 or more hours each day, seven days a week, so they can send money home to their families.

"We contact the companies who run the sites, many of them we have known for a long time, and simply set up with an umbrella and some chairs in a corner of the site," Father Maier said.

Over the decades, the Mercy Centre's work has extended beyond schools to refuges for women, facilities for people living with HIV/AIDS and a hospice. The tireless work and positive energy that the octogenarian exudes has captured the attention of some substantial donors, and in 2000 a single donation enabled modern and permanent facilities to be built in the heart of the Khlong Toey slums.

Despite his disagreements with authorities, inside and outside the church, Father Maier has always found a way.

"I have had to have a great working relationship over the years with the police, especially, and local authorities," he said. "We are at our best when we work with the poorest of the poor; when we lose sight of that, we fail."

Michael Sainsbury - Catholic News Service
Provide feedback on this article
Join the conversation: Login or create an account
Before you can comment, you need to update your profile to include your first and last name, as required in our comments policy. Then reload this page and you'll be set up for commenting. Update your profile