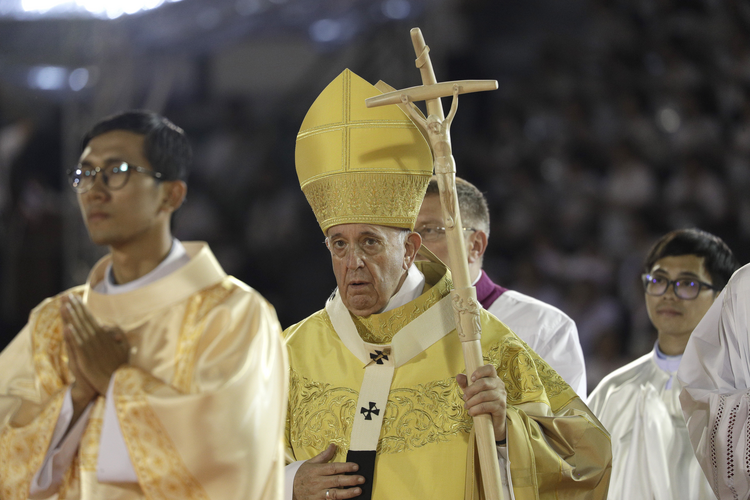 To be “a missionary disciple is not a mercenary of the faith,” Pope Francis told the Catholics of Thailand, but rather “a humble mendicant” who longs to bring missing family members to the Sunday table.

The joy was palpable as the pope arrived at the national stadium in Bangkok to celebrate Mass commemorating the 350th anniversary of the establishment in 1669 of the first mission of the Catholic Church in the Kingdom of Siam (the original name for Thailand).

Some 60,000 Catholics from Thailand as well as Vietnam and the Philippines joined the cardinals and bishops of the country’s 11 dioceses in cheering as the missionary pope arrived on this hot, humid day, where the temperature was still 90 degrees in the evening.

They cheered wildly as he arrived at the stadium in a popemobile made in Thailand as the sun began to set over this city of almost nine million people and countless skyscrapers. Just before he processed in with the cardinals and bishops, all dressed in gold-colored vestments for the festive occasion, a band of some 100 young people played the Thai national anthem.

To be “a missionary disciple is not a mercenary of the faith,” Pope Francis said, but rather “a humble mendicant” who longs to bring missing family members to the Sunday table.

After the reading of the Gospel, Pope Francis delivered a deeply moving homily in Spanish, which was translated immediately by a deacon into Thai. He reflected on why the first missionaries came to this land and what it means for the followers of Jesus in Thailand today. He recalled that Jesus told his disciples that it is not blood relations or ethnic belonging that makes one part of Jesus’ family but only “whoever does the will of my Father in heaven is my brother, sister and mother.”

He reminded Thai Catholics and the majority Buddhists of this nation, many of whom would have been watching on national television, that “the Gospel is an invitation and a freely bestowed right for all those who want to hear it,” and it is “full of questions that attempt to unsettle and stir the heart of the disciples, inviting them to set out to discover the truth that is capable of giving and generating life.”

He said the first missionaries who set foot in these lands “came to realize that they were part of a family much larger than any based on bloodlines, cultures, regions or ethnic groups.” And so, “impelled by the power of the Spirit...they set out in search of family members they did not yet know.”

The first missionaries who set foot in these lands “came to realize that they were part of a family much larger than any based on bloodlines, cultures, regions or ethnic groups.”

These missionaries, he said, “set out to seek their faces” with new hearts that “overcame the adjectives of division,” and this “enabled them to discover the many Thai ‘mothers and brethren’ who were still absent from their Sunday table.” He said they came “to share with them everything that they themselves could offer but also to receive what they needed to grow in their own faith and understanding of the Scriptures.”

On coming to Thailand, he said, “the missionaries came to understand more fully the Father’s loving plan, which is not limited to a select few or a specific culture but is greater than all our human calculations and predictions.”

Pope Francis told the 60,000 Catholics present and this nation of over 65 million Buddhists that “a missionary disciple is not a mercenary of the faith or a producer of proselytes but rather a humble mendicant who feels the absence of brothers, sisters and mothers with whom to share the irrevocable gift of reconciliation that Jesus grants to all.”

A missionary disciple “feels the absence of brothers, sisters and mothers with whom to share the irrevocable gift of reconciliation that Jesus grants to all.”

This year, he said, marks the 350th anniversary of the creation of the apostolic vicariate of Siam (1669–2019), which was “a sign of the fraternal embrace brought forth in these lands.” He highlighted the fact that “two missionaries alone were able to sow the seed that, from that distant time, has grown and flourished in a variety of apostolic initiatives that have contributed to the life of the nation.”

He told Thai Catholics, who count for less than 1 percent of the population, that this anniversary “is not a celebration of nostalgia for the past but a fire of hope to enable us, here and now, to respond with similar determination, strength and confidence.” He said today’s celebration is meant to be “a festive and grateful commemoration that helps us to go forth joyfully to share the new life born of the Gospel with all the members of our family whom we do not yet know.”

He told them we become missionary disciples “when we choose to be a living part of the Lord’s family.” He said “we do this by sharing with others as he did. He ate with sinners, assuring them that they, too, had a place at the Father’s table and the table of this world; he touched those considered to be unclean and, by letting himself be touched by them, he helped them to realize the closeness of God and to understand that they were blessed.”

“A missionary disciple,” the pope said, “knows that evangelization is not about gaining more members or about appearing powerful.”

Pope Francis encouraged Thai Christians to seek to bring God’s mercy and healing to many groups of people suffering in their homeland. He mentioned first of all “children and women who are victims of prostitution and human trafficking, humiliated in their essential human dignity” and also “young people enslaved by drug addiction and a lack of meaning that makes them depressed and destroys their dreams.”

He encouraged them to also reach out to the “migrants, deprived of their homes and families, and so many others, who like them can feel orphaned, abandoned, without the strength, light and consolation born of friendship with Jesus Christ, without a community of faith to support them, without meaning and a goal in life.” Lastly, he encouraged them also to reach out to “exploited fishermen and bypassed beggars.”

What it means for Pope Francis to visit Thailand, a majority Buddhist country
Gerard O’Connell

“A missionary disciple,” the pope said, “knows that evangelization is not about gaining more members or about appearing powerful. Rather, it is about opening doors in order to experience and share the merciful and healing embrace of God the Father, which makes of us one family.”

He concluded by encouraging Thai Catholic communities to “continue to go forward in the footsteps of the first missionaries, in order to encounter, discover and recognize with joy the faces of all those mothers and fathers, brothers and sisters whom the Lord wants to give us and who are absent from our Sunday table.”

He then continued the Mass in which these Thai Catholics participated with great faith, reverence and gratitude to this pope, who once wanted to be a missionary Jesuit priest in Japan but who is today a missionary not only to their ethnically diverse country but also to the whole of Asia.

Tomorrow, Pope Francis will drive about an hour out of Bangkok to the shrine of the country’s first martyr priest, where he will address not only Thailand’s bishops but also bishops from the Federation of Asian Bishops’ Conferences.

This article also appeared in print, under the headline “GoodNews: Pope Francis celebrates 350 years of faith in Thailand,” in the December 9, 2019, issue.