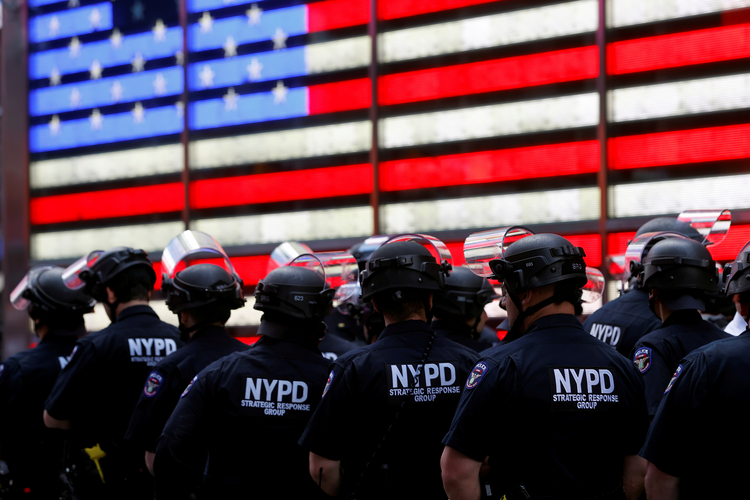 The heads of three U.S. Conference of Catholic Bishops’ committees have called for “better practices for formation and accountability for police” in a joint letter to all members of Congress.

“Law enforcement officers perform a great and needed service; they serve to promote justice and the common good in society,” they said. “But it is clear that there have been too many failures in serving everyone, with tragic consequences.”

The “terrible and unjust killing of George Floyd, Rayshard Brooks and so many more” in police custody demonstrates the urgent need for police reforms, they said. The U.S.C.C.B. released a copy of the letter late on June 24.

“There must be better practices for formation and accountability for police, certainly in the use of lethal force, but also in patterns of discrimination and prejudice, so that real accountability can happen before more lives are lost,” the bishops said.

U.S. bishops: “Law enforcement officers perform a great and needed service; they serve to promote justice and the common good in society. But it is clear that there have been too many failures in serving everyone, with tragic consequences.”

“Across our country, indeed across the entire world, people are examining yet once more the evil of racism, both historic and present, and its devastating effects on individuals and society,” they said.

The bishops said that the nation “must make progress” on the use of force by police and other law enforcement agencies, noting that Pope Francis, speaking to a group of law enforcement officers in 2017, said that the “use of force” must “never degenerate into violence,” an effort that “demands great wisdom and self-control” and one especially important when officers are often “regarded with mistrust or almost as an enemy, rather than as guardian of the common good.”

At that address to police in November 2017, Pope Francis also urged “a style of mercy” in policing, according to the bishops, which “is not synonymous with weakness, nor does it require the renunciation of the use of force,” but does mean “making the effort to understand the needs and the motivations of the people” whom police encounter, and to apply mercy “in the countless situations of weakness and pain that [police] face every day.”

“We stand in the long tradition—from St. Augustine, to St. Thomas Aquinas, to Dr. Martin Luther King—that claims that the purpose of law and law enforcement is the promotion of justice,” they wrote. The “only solution to the challenges of this moment," they said, is to follow the wise counsel of St. Paul VI: “If you want peace, work for justice.”

“When protesters shout, ‘No justice, no peace,’ perhaps without realizing it, they are paraphrasing an axiom of the Church," the bishops added. “A police force that is accountable to its highest standards—discipline, self-control, mercy, and the recognition that every person is made in the image of God—can promote justice and thus bring about peace.”

Then, quoting Pope Francis from "Evangelii Gaudium” (no. 59), the bishops added, “However, ‘[w]hen a society—whether local, national or global—is willing to leave a part of itself on the fringes, no political programs or resources spent on law enforcement or surveillance systems can indefinitely guarantee tranquility.’”

The U.S. Catholic bishops, they said, “have pointed out numerous times that racism remains a problem in the criminal justice system,” most recently in their 2018 pastoral letter, “Open Wide our Hearts: The Enduring Call to Love.”

In the Senate late on June 24, Democrats blocked a vote to debate the Republicans' Justice Act on police reform introduced by Sen. Tim Scott, R-South Carolina, the only Black Republican in the Senate. His bill would have created a national database of police use-of-force incidents, restricted police chokeholds, and set up new training procedures and commissions to study race and law enforcement.

News reports said House Speaker Nancy Pelosi, D-California, accused Republican leaders in the Senate of “trying to get away with murder” with their police reform bill. The House was scheduled to vote on its version on June 25, which mandates sweeping changes and would hold police liable to damages in lawsuits.

Provide feedback on this article
Join the conversation: Login or create an account
Before you can comment, you need to update your profile to include your first and last name, as required in our comments policy. Then reload this page and you'll be set up for commenting. Update your profile
Advertisement
More: US Church / US Politics / Racial Justice