Six lessons for police reform from the Catholic Church 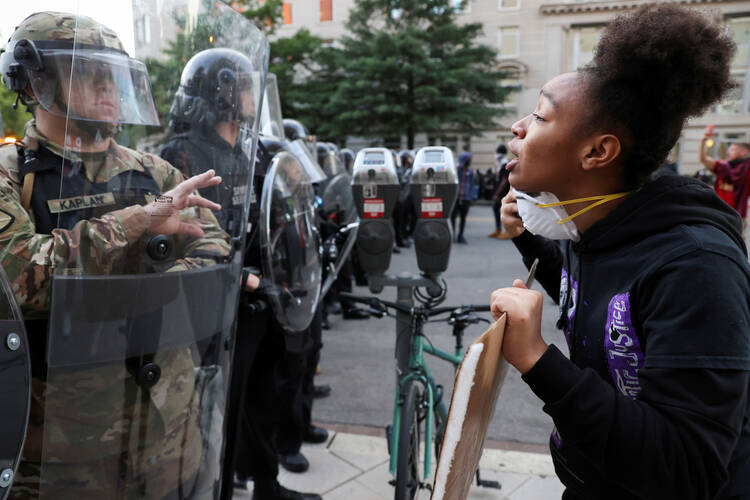 In the 1990s, Steve Hurley was a police officer in Ocean City, Md., chasing down speeding teenagers and locking up beach bums driving drunk. At 34, he traded the badge for a collar, and he is now a monsignor in the Diocese of Wilmington, Del. “People see a 180-degree turn, but in both jobs the primary responsibility is care for souls,” he says.

The Catholic Church and the U.S. law-enforcement system have something else in common: They are both powerful institutions with fiercely loyal agents who have covered up misdeeds—clergy sex abuse and police brutality—and have been in need of reform.

The outcry over the killing of 46-year-old George Floyd, an African-American man, in Minneapolis on May 25 has forced a reckoning with the philosophy and culture of U.S. policing. Across the country, demonstrators have marched to demand an end to police brutality and a change in the tasks assigned to the roughly 18,000 police departments and agencies across the country.

The Catholic Church and the U.S. law-enforcement system have something else in common: They are both powerful institutions with fiercely loyal agents who have covered up misdeeds.

Local, state and federal agencies from Phoenix to New York are now considering efforts to revamp policing and police culture. Already President Trump has ordered the creation of a database that tracks violent officers and has approved guidelines restricting the use of chokeholds, although critics said his proposals are not serious about tackling bigger issues of systemic racism.

In that conversation, is there anything to be gained by looking at the Catholic Church and how it has tried to better train and manage its priesthood, if not always successfully?

The parallels are not perfect, but they abound. Priests and police both wear iconic uniforms and perform service work for their communities. Both have at times commanded immense public trust that has now been eroded. Both are fiercely loyal to their “professional” communities with good and bad consequences: Catholic priests struggle with clericalism and U.S. police are reluctant to cross the thin blue line.

Finally, they are both classic representations of masculinity: Less than 15 percent of police officers are female. And Monsignor Hurley is not a rarity. The ranks of clergy, including permanent deacons, include many men with police experience.

Both “involve a hierarchical structure, a chain of command, possess a lot of authority and can close ranks and be silent when they know their colleagues have been doing something wrong,” says Tobias Winright, a former corrections officer and reserve police officer who is now a theologian and ethicist at St. Louis University. “And now, with policing, there’s been a call for more transparency, more community participation and involvement. On the theology and church side, there’s been more emphasis on the “priesthood of all believers” and lay involvement.”

Jim Keenan, S.J.: “When I was a boy, you could go to talk to police, and now they’re covered in weapons.”

Create a more accessible culture: Jim Keenan, S.J., the son of a police officer, says priests and cops should be trained to be as accessible and open as possible. “When I was a boy, you could go to talk to police, and now they’re covered in weapons,” he says.

Priests do not carry guns, but they can seem as remote and inaccessible sometimes. “In seminary, you’re taught to use your power for service, and corruption happens when you lose the service and it’s only about that power.”

The clergy sex abuse scandal has forced priests to become more humble, says the journalist Jason Berry, an authority on clergy sex abuse. “There has been a demythologizing of the priesthood, and that’s been a good thing,” he says. Similarly, “there has long been an over-glorification of the policing, although for African-Americans the police [always] have been a kind of threat.”

Emphasize transparency and be patient: That is the most important drive of reform, says Gerald Schlabach, a theologian and author of Just Policing, Not War. “You’re always going to have some sort of authority structure, but it has to be accountable,” he says.

The U.S. bishops’ 2002 Dallas Charter, which mandates reporting credible accusations to law enforcement, has been criticized as too opaque and protective of bishops. But reform takes times, says Janine Geske, a former Wisconsin state supreme court justice who now leads restorative justice to address the harm caused by the clergy abuse scandals.

“Men in maximum-security prisons have told me their first memories as children are being mistreated by a police officer on the street,” she says. “You’re not going to get rid of all the bad people, so the question is how do you get people to react differently and have the courage to come forward when something bad happens, and that takes time to develop.”

Involve more civilians: Mr. Schlabach sees an analogy between the post–Vatican II lay movement in the Catholic Church and initiatives to change the definition of what police officers do. In both cases, there’s a “yes, Father” culture where people want priests and the police to solve their problems.

Gerald Schlabach: “You’re always going to have some sort of authority structure, but it has to be accountable.”

“Police have been called to do more and more,” he says. “And the alternative is you have to talk to your neighbors, and practice good conflict resolution skills yourself.”

Be careful whom you recruit: The key to reforming the police is choosing what kind of people you recruit, says Larry Preston Williams, an African-American former police officer in New Orleans who was a plaintiff in a 1970s lawsuit that led to more women and minorities being recruited. “You need to take officers off the street who tend to be aggressive,” he says. “And you have to overcome the thin blue wall of silence, where if you say something you’re ostracized.”

Critics of the church’s reform efforts point to the lack of women in church power structures and worry that many seminaries are focused on graduating enough members to respond to the priest shortage. “It’s still a system where bishops are under pressure to ordain as many guys as possible,” says Jennifer Haselberger, a canon lawyer who quit the St. Paul-Minneapolis diocese to protest the cover-up of clergy sex abuse.

“You do have people drawn into these professions for the wrong reasons,” says Michael D’Antonio, author of Mortal Sins: Sex, Crime and the Era of Catholic Scandal. “And the church’s resistance to democracy is similar to the police’s resistance of civilian oversight.”

Look at broader issues: In the case of clergy sex abuse, the problem was about power and lack of transparency as much as about pedophilia. In the case of police brutality, “there are systemic issues of racism and white privilege that needs to be looked at,” says Kathryn Getek Soltis, a theologian at Villanova.

Put people before institutions: “If you try to avoid scandal, you end up compromising the dignity of individual people,” says Ms. Getek Soltis. In the end, she points out, the church, like policing, is about people. “Francis said priests should smell like the sheep,” she says. “You need to walk with the flock.”

For Msgr. Hurley, the Maryland police officer turned Delaware priest, the solution for both is to “establish a connection and show a friendly face.”

When police and priests become tribes unto themselves, the inclination, he says, is “to cover up.”

“And to break from that, you need to pull all the Band-Aids off. We’re still doing that with the church.”