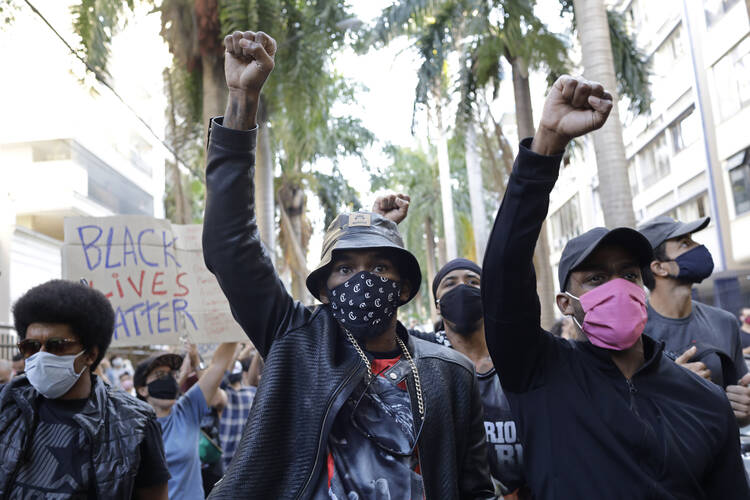 People protest against crimes committed by the police against black people in the favelas, outside the Rio de Janeiro's state government, Brazil, Sunday, on May 31. (AP Photo/Silvia Izquierdo)

Images of massive anti-racism protests in the United States have had a powerful impact in Latin America and the Caribbean. The U.S. protests have continued for weeks after the killing on May 25 of George Floyd in Minneapolis. Now activists and everyday people across Latin America, inspired by the Black Lives Matter movement, have organized demonstrations related to their own local histories of police brutality, classism and racism. The church has taken part in many of these campaigns.

“There’s a common denominator in the United States and Latin America: Human rights violations associated with police abuse many times go unpunished. That’s why such protests are spreading throughout the region,” said Luis Arriaga, S.J., the rector of the ITESO, Jesuit University of Guadalajara in Mexico. Last year, Father Arriaga founded the Francisco Suárez Center for Dignity and Justice, which has been accompanying and documenting cases of torture and violence in Jalisco State.

Police brutality, said Father Arriaga, usually affects ethnic minorities and the poor disproportionately in Latin America. “Racism and classism have a centuries-old history in the region that must be denounced,” he told America. “Data shows that the police are more violent with minorities and that there’s a pattern of criminalizing the poor.”

“There’s a common denominator in the United States and Latin America: Human rights violations associated with police abuse many times go unpunished. That’s why such protests are spreading throughout the region.”

In Mexico, protests inspired by U.S. demonstrators erupted on June 4 after the circumstances around the killing of Giovanni López were released to the public. According to his family, the 30-year-old construction worker had been detained on May 4 in a city near Guadalajara because he was not wearing a mask.

The next day his lifeless body was taken to a hospital. He had several wounds and signs of traumatic brain injury. Several police officers have been arrested, and an inquiry has begun into what happened to Mr. López while he was in custody.

Massive demonstrations have been held in Guadalajara and other Mexican cities demanding justice for Mr. López, at times resulting in acts of vandalism and in the detention of protestors. “There have been reports of acts of violence and arbitrary arrests by the police during such demonstrations,” Father Arriaga said.

On June 9, in Mexico’s southern Oaxaca State, a 16-year-old soccer player, Alexander Martínez Gómez, was shot in the head by a police officer as he rode his motorcycle with a group of friends. The killing of the U.S.-born Mr. Martínez led to renewed protests.

The current wave of demonstrations has also encouraged black Mexicans to keep pressing for their civil rights, said the Rev. Flaviano Cisneros, a member of the Afro-Mexican pastoral commission and the coordinator of the non-governmental organization Mexico Negro.

The current wave of demonstrations has also encouraged black Mexicans to keep pressing for their civil rights.

“This is the time for Mexico to do some soul searching and acknowledge that it has done very little in terms of [respoinding to] racism, xenophobia, discrimination and other forms of intolerance when it comes to the Afro-Mexicans’ dignity of life,” he told America.

In Colombia, activists protested the killing of George Floyd and against the presence of U.S. troops in the country on June 3 in front of the U.S. embassy in Bogotá. They also highlighted the case of Anderson Arboleda, a 19-year-old black Colombian who was killed by police on May 19 in Puerto Tejada, a largely black municipality near Cali. Two officers allegedly struck Mr. Arboleda on the head, claiming that he was not complying with the mandatory Covid-19 quarantine. He died the next day.

On June 12, a large demonstration was organized in Puerto Tejada to protest his death and the killing of other young black men in the region.

“People were mostly silent about those cases. With the eruption in the United States, [tensions] emerged again,” said the Rev. Emigdio Cuesta Pino, one of the coordinators of the Afro-Colombian pastoral commission.

Father Cuesta said that incidents involving police brutality against blacks are frequent in Colombia. “When I take the mass transit bus in Bogotá, I’m always chosen to be frisked by agents. I ask them why and they tell me that it’s a random selection. But such randomness always affects me, curiously,” said Father Cuesta, who is black.

The Rev. Rafael Savoia is an Italian-born Comboni missionary who worked 32 years with Afro-Ecuadorians and has spent 19 years working with the Afro-Colombian community. He described the continuous struggle of Afro-descendants in both countries for human rights and against state violence, a movement that now has been amplified.

“Black people have been suffering for a long time, so there’s a continuity in the current wave of protests in relation to their historical struggles. People are reacting to the events in the United States and in their own countries and are organizing resistance according to their local conditions,” Father Savoia said.

“When I take bus in Bogotá, I’m always chosen to be frisked by agents. I ask them why and they tell me that it’s a random selection. But such randomness always affects me, curiously.”

Over recent decades, the church has assisted the organization of the black community in several Latin American countries, according to Father Savoia. “A number of bishops in Colombia, Ecuador, Peru, Panama, Honduras, Belize and Mexico have supported the organization of Afro-Latino pastoral commissions. The Latin American church’s preferential option for the poor opened the way to that attitude among us,” he said.

According to Father Savoia, new protests will certainly be organized in Colombia and Ecuador over the coming weeks.

Father Cuesta argues that the Afro-Colombian pastoral commission must strengthen its ties with the country’s black social movements. “At times, the commission is slow in accompanying the popular movements. But some of its members are taking part in the demonstrations,” he said.

In Brazil, the nation with the largest black population in Latin America—more than half of the 210 million Brazilians are of African descent—protests against racism and police brutality were held in Curitiba, São Paulo, Rio de Janeiro and other cities.

The demonstrators demanded justice in the case of João Pedro Pinto, a black 14-year-old boy who was shot dead at home during a police operation in the city of São Gonçalo in Rio de Janeiro metropolitan area on May 18.

“For us, this anti-racist spring is a breath of Pentecost for the Catholic Church in Brazil,” said the Rev. David Santos, the founder of the black nongovernmental organization Educafro.

Many anti-racist protests in Brazil came together with demonstrations against President Jair Bolsonaro, who has been criticized for his mismanagement of the Covid-19 crisis—he has repeatedly attempted to minimize the seriousness of the disease and opposed the adoption of a federal quarantine—and for the escalation of authoritarianism he promotes.

In Brazil, the nation with the largest black population in Latin America, protests against racism and police brutality were held in Curitiba, São Paulo, Rio de Janeiro and other cities.

Father Santos is one of the coordinators of an anti-Bolsonaro campaign called Somos 70%—“We’re 70%,” a reference to the percentage of people who do not support the president according to recent polls—and believes that both themes must come together.

“This is the time to wake up and resist the genocide of the black youth in Brazil,” he said. “More and more people in the church have realized that Catholics must be more involved in this struggle.”

Massive protests in São Paulo gathered thousands of people despite social isolation measures imposed in the city because of the coronavirus. According to Father Santos, activists urged that only those protesters “who don’t live with people in the groups at higher risk should attend the demonstrations.”

But “many of them said that this cause is bigger than their lives,” he said.

In the Caribbean, where black people represent the largest demographic group on many islands, protests have taken place in Port of Spain, Trinidad and Tobago and Kingston, Jamaica.

On June 5, the Most Rev. Gabriel Malzaire, the president of the Antilles Episcopal Conference and bishop of Roseau, Dominica, released a video with a short commentary on George Floyd’s killing. “To overlook the seriousness of this crime is to perpetuate the longstanding disease of racism, which cries for redress,” he said.

Father Tulloch believes the current wave of protests may reignite the social consciousness of church in the Caribbean. “The church has lost the sense of social responsibility that it used to have in the 1970s and 1980s,” he said. “I think this is an opportune time for the church to reclaim what we had in terms of attentiveness to social justice issues.”

He thinks the protests in Jamaica against police brutality will probably continue.

Bishop Malzaire argued that the role of the church in the Caribbean should be to attack the source of violence, which he suggests is primarily related to poverty. “It’s a long-term effort. We have to give a sense of worth to the poor, making sure that the poor people are taken care of,” he said. A good place to start is through the church’s “longstanding tradition in education,” he said.

Most countries in the region missed opportunities to reform their police in recent decades and now have to deal with law enforcement services that make constant use of authoritarian practices, according to Father Arriaga. As new cases of violence accumulate, more protests will certainly be organized, he said.

“To peacefully demonstrate is a right. The police’s acts of violence are violations of the law,” he said. “This has to be clear.” 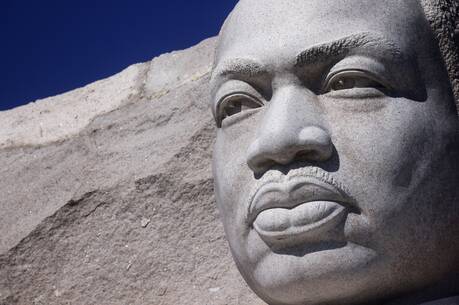