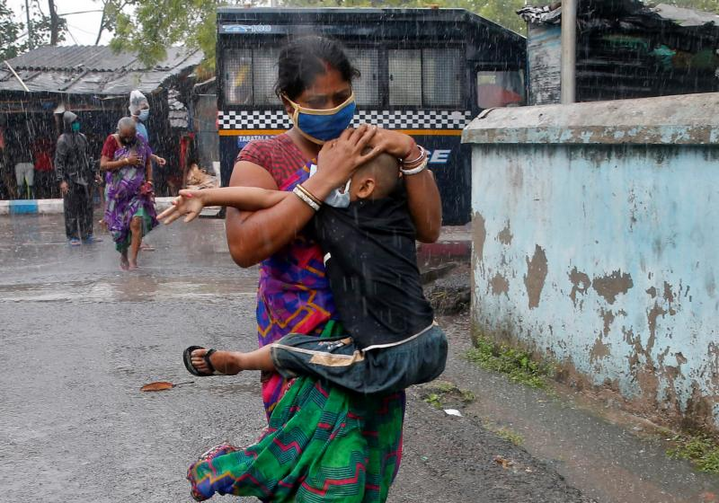 A masked woman in Kolkata, India, tries to protect her son from heavy rain as they rush to a safer place before Cyclone Amphan makes its landfall, May 20, 2020. (CNS photo/Rupak De Chowdhuri, Reuters)

Sheltering people from one of the strongest storms in more than a decade required convincing affected Indians and Bangladeshi that evacuation centers would have masks and other coronavirus protections in place, a Catholic Relief Services representative said.

Cyclone Amphan slammed into low-lying areas of India and Bangladesh May 20, with winds of up to 115 miles an hour and surging waters as high as 16 feet.

Nearly 3 million people have evacuated their homes and moved to emergency shelters in the two countries.

In a coronavirus lockdown, this "natural disaster is doubly traumatic, and people will want to go back to their homes as soon as possible," Senthil Kumar, Catholic Relief Services' representative for India, said May 20 from Delhi.

With COVID-19, "people were wary of going to shelters," he said, noting that with widespread understanding "of the need for social distancing and hygiene" measures, "people weren't sure how this would work in the evacuation centers."

But with the cyclone's lashing winds and heavy rainfall, "evacuation is essential," Kumar said. "We've had community volunteers talking about the arrangements and reassuring people" who had to move, he said.

The Indian government, church agencies and civil society "took the approach of ensuring this was not camping," he said.

Centers that would normally fit 100 people are now set up for one-third of that number "and images of people sitting apart with masks on" were widely shared, he said. Schools and other solid structures are being used as extra shelters to enable adequate spacing, he said.

While there is "so much panic about COVID-19," the "heightened focus on health infrastructure" that the coronavirus has brought "is being used to prepare for this disaster too," Kumar said.

The number of COVID-19 cases in India, which has a population of 1.3 billion people, reached 100,000 May 19. The Indian government has extended the nationwide lockdown, but May 17 relaxed rules in areas with fewer cases.

"People have moved with their most precious belongings," he said, noting that "it helps that trusted people in the community give these messages of reassurance."

Shortly before the cyclone hit, many thousands of migrant workers were on India's roads trying to return to their village homes after the lockdown destroyed their livelihoods.

Most are men who find part-time labor on farms or work in India's cities in manufacturing and other industries, including at small hotels, Kumar said.

Catholic Relief Services and others are helping the migrants to stay in camps until the cyclone has run its course, Kumar said. "Afterward, we will help them get back to their homes," he said.

Heavy rainfall was expected to lead to flash flooding across the region, and the damage would have a "considerable impact on the livelihoods of communities," he said.

Many of those in the storm's path "are fishermen, and they have been warned not to be out at sea" for a while, he said.

While farmers harvested early and "preserved what they could, there is only so much they can do," Kumar said, noting that food security will be endangered "depending on the severity of the damage" to crops and plantations.