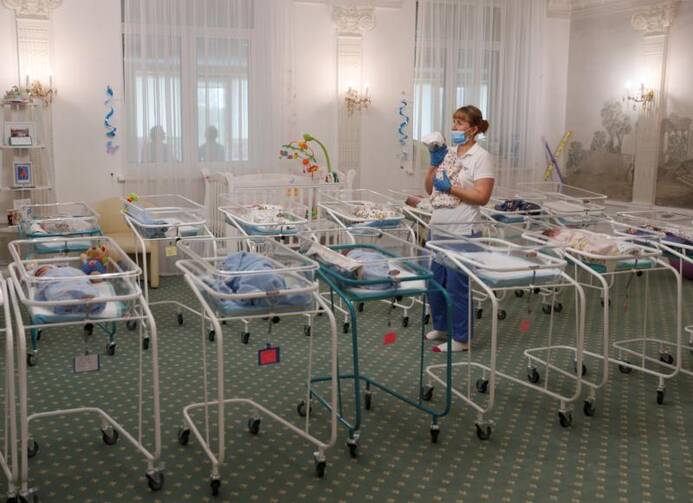 A nurse and newborns are seen in the Hotel Venice, which is owned by BioTexCom. a surrogacy agency in Kyiv, Ukraine, May 14, 2020. Dozens of babies born to surrogate mothers are stranded in Ukraine as the COVID-19 pandemic lockdown prevents their foreign parents from collecting them. The country's Catholic bishops have called for a halt to commercial surrogacy. (CNS photo/Gleb Garanich, Reuters)

KYIV, Ukraine (CNS) -- Border closures to prevent the spread of COVID-19 have highlighted another "pathology" in modern Ukraine: the practice of commercial surrogacy, said the country's Catholic bishops.

Archbishop Sviatoslav Shevchuk of Kyiv-Halych, head of the Eastern-rite Ukrainian Catholic Church, and Archbishop Mieczyslaw Mokrzycki of Lviv, president of the country's Latin-rite bishops' conference, appealed to the Ukrainian government May 14 to put an end to the practice of allowing foreigners to hire Ukrainian women to bear children for them.

They asked the government to enact family-support policies that would "ensure that Ukrainian mothers do not have to trade their bodies and their children for their own and their families' survival."

Their statement came after BioTexCom, one of the country's largest surrogacy agencies, posted a video on YouTube April 30 showing 46 infants being cared for in a Kyiv hotel suite. The text and narration sought to assure the people who contracted for the children that they are safe and healthy.

Lyudmyla Denisova, Ukraine's human rights commissioner, told reporters that with international travel banned, more than 100 babies in Ukraine are awaiting their new parents; it demonstrates that the country has a "massive and systemic" surrogacy industry where babies are advertised as a "high quality product," she said.

Although the video showed women holding, feeding, changing and caressing the babies, the Catholic bishops also said it showed "46 crying babies, deprived of maternal touch, parental warmth, selfless care, much-needed love." The result, they said, is a scene of "a purchased product for which the buyer did not come."

Persons, Not Products
The Editors

The ethics of outsourcing childbirth
The Editors

"Such a demonstration of contempt for the human person and his dignity is unacceptable. And all this is possible due to legalized surrogacy," the archbishops said.

"So-called surrogate motherhood, which should not be called 'motherhood,' entails not only the horrible phenomena now manifested, but, at its core, is a moral evil and brings countless sufferings and hardships to all participants in this deal, including the child, surrogate mother, members of her family, and, finally, the people who order and 'produce' children," the bishops said.

Even so-called "altruistic surrogacy," where a woman bears a child for another without payment, is morally unacceptable, the bishops said. But commercial surrogacy, "from a moral point of view, deserves an even harsher assessment because it adds the moral evil of buying and selling the functions of the body and the person of the newborn child. No circumstances or consequences can justify the practice of surrogacy."

Politically, the bishops added, the legalization of commercial surrogacy "makes it impossible for Ukraine to follow the path of development, the path of a great European heritage. Such a gap in Ukrainian legislation significantly destroys European integration efforts and discredits our country in the eyes of European society," where surrogacy for pay is illegal.