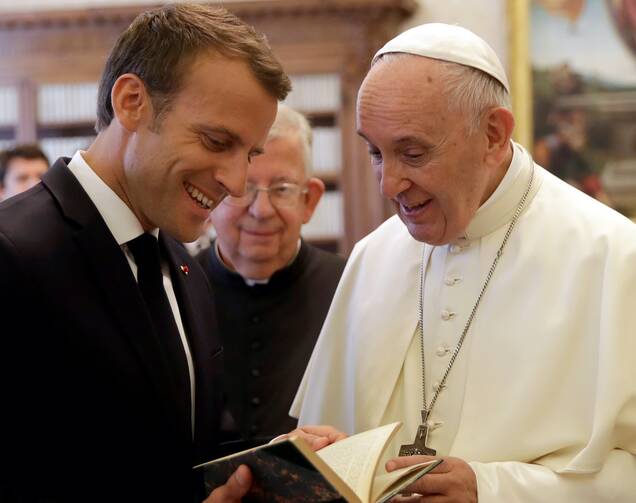 Pope Francis and French president Emmanuel Macron spoke together by phone this afternoon, reaching a significant “convergence of views” on several issues, including how the European Union can respond in a united way to the coronavirus pandemic and the need for debt reduction in the developing world.

The president’s office said Pope Francis expressed his closeness and support to France, where Covid-19 has claimed more than 20,000 lives. It added that the pope hailed “the constructive responses taken by France at the international level after the health crisis caused by the pandemic.”

It also revealed that Pope Francis and President Macron agreed on the need for a global ceasefire in all conflicts. The U.N. Secretary-General António Guterres has urged the various parties in conflict in different countries to accept ceasefires and Pope Francis has publicly supported that appeal during Holy Week and on Easter Sunday.

Pope Francis expressed his closeness and support to France, where Covid-19 has claimed more than 20,000 lives.

The pope and the president reached agreement on their vision for the reduction or cancellation of the debt of poor countries during the global emergency, an issue that Pope Francis has been pushing for some time. They also agreed on the necessity to increase aid to Africa.

The two leaders conducted a 45-minute conversation in Spanish and French, with the help of an interpreter, according to AFP. A photo published in French media depicted a smiling Mr. Macron talking over the phone with the pope.

The Vatican has not issued any statement so far regarding the dialogue, as is its normal practice regarding private conversations with the pope. America has learned that the phone conversation took place at the request of the French leader.

It was particularly significant that the two leaders spoke on the eve of a very important meeting of the heads of the 27 member states of the European Union that is scheduled to be held by video conference on April 23. That meeting is expected to result in crucial decisions regarding the financial instruments the union will adopt to assist states’ response to the Covid-19 pandemic, especially those nations most badly hit by the virus—Italy, Spain and France.

In his Easter Sunday “Urbi et Orbi” address, Pope Francis told the union’s 27 member states that they are “facing an epochal challenge.”

E.U. members are also expected to discuss financial instruments that will help fund reconstruction in the aftermath of the pandemic. On the eve of that summit, division remains among the member states about the path ahead. Pope Francis has been encouraging E.U. solidarity over national interests.

In his Easter Sunday “Urbi et Orbi” address, he told the union’s 27 member states that they are “facing an epochal challenge,” one that will decide not only the E.U.’s future but that of the whole world, and he pleaded with them not to miss the opportunity “to give further proof of solidarity” by working jointly on innovative solutions.

Mr. Macron and German Chancellor Angela Merkel have emerged as the two strongest leaders of the European Union, and they agree with Pope Francis on the need for a strong, united European Union.

This was the third time that Pope Francis and President Macron have spoken. They first met on June 26, 2018, and the chemistry between the two men seemed to be particularly good as they spoke together for 57 minutes. It was the longest meeting between the pope and a head of state since Francis met with U.S. President Barack Obama in 2014. They spoke together a second time by phone in May 2019 after the fire at Notre-Dame Cathedral in Paris.

Although he was born into a non-religious family in Amiens, Emmanuel Macron decided to become a Catholic and was baptized at the age of 12. He went on to study at a Jesuit school, La Providence, in his hometown where he met his future wife, Brigitte, who was a teacher there.

He later studied with the French Protestant philosopher, Paul Ricoeur, and went on to work in banking for Rothschild & Co. According to the French media, the 42-year-old president now professes to be agnostic.

Today France is a secular state, marked by “laïcité” or the strict separation of the state from religion. Nevertheless, it has a predominantly Christian population: Around 64 percent of its 65 million citizens are Christian, and some 83 percent of all Christians in France are Catholic, though the practice of religion is very low.