As coronavirus spreads amid deportations, bishops call for protection of migrants 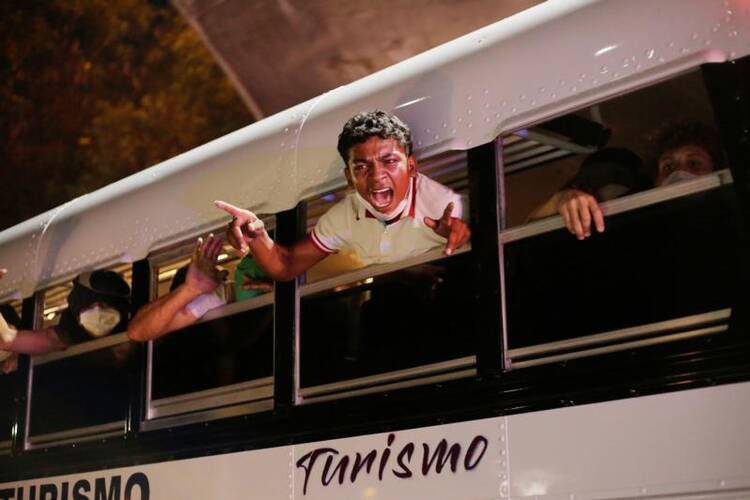 Honduran immigrants deported on a flight from Mexico April 15, 2020, demand to be freed as they are bused to a shelter in Tegucigalpa, Honduras, to be quarantined during the coronavirus pandemic. (CNS photo/Jorge Cabrera, Reuters)

WASHINGTON (CNS) -- Some U.S. bishops joined an effort by national organizations and other groups in Latin America calling on global leaders to provide better protections for migrants and refugees during the coronavirus pandemic, while also voicing worries about the spread of the virus to other countries via deportations.

One of the organizations that joined the statement, released by the Washington-based Faith in Action and the Hope Border Institute of El Paso, Texas, raised an alarm about Mexican authorities busing migrants to shelters near the Guatemala border and encouraging migrants to cross south into the country.

"They're not providing any medical care or taking precautions to protect against the spread of COVID-19. The situation is very chaotic and it's exposing migrants and our staff to a great risk of contracting the virus," said Ramon Marquez Vega, who directs La 72, a migrant shelter in southern Mexico near the Guatemala border. He made the comments in the statement provided by Faith in Action and the Hope Border Institute.

Guatemalan authorities recently said the U.S. sent a plane of deportees to the country with the majority of them carrying the coronavirus, which causes COVID-19.

The April 15 statement backed by El Paso Bishop Mark J. Seitz, along with Cardinal Joseph W. Tobin of Newark, New Jersey, and Cardinal Alvaro Ramazzini of Huehuetenango, Guatemala, called for an immediate release "of as many migrants and asylum-seekers from detention as possible."

It called for measures to slow the spread of the virus in refugee camps, migrant shelters and detention centers, and to provide migrants and refugees equal access to prevention, testing and treatment for COVID-19. Migrant advocates worry the close quarters of detention and the lack of adequate health care will put the detainees as well as the personnel of the facilities in danger.

The statement also called for a guarantee to assure migrants the right to seek asylum and for global leaders to "make immediate and large-scale investments in public health systems and food and income support for vulnerable families."

Other groups that advocate for migrants, such as Catholic Relief Services, joined grassroots organizations from Mexico, Honduras, Guatemala and El Salvador in adding their voices to the effort.

"In his Easter letter to popular movements around the world, Pope Francis lamented that the pandemic has laid bare the inequalities embedded within our political and social systems. As always, those at the margins of our societies are feeling the harshest impact -- none moreso than migrants at this time," said Bishop Seitz. "We will only be successful in this fight against COVID-19 to the degree that we act in solidarity with the most vulnerable."

Other migrant advocates from Central America worried that measures by U.S. authorities are putting the international community in danger.

Brenda Peralta Arias, of Centinelas por la Dignificacion del Estado in Guatemala, said in a declaration provided by the coalition of groups that the continued crackdown on migrants and lack of coordinated response by the U.S. with Central American nations "is putting both migrants deported back to our country and our communities at risk."

"Daily flights from the United States of asylum-seekers back to Guatemala without basic testing or treatment protocols are exacerbating contagion here and endangering the health and welfare of everyone. This is inhumane, unsafe and unacceptable," she said in the statement.

Some of the countries have closed their airports and guarded their borders, afraid that their health care systems could collapse.

Trump administration officials said they would be sending officials from the Centers for Disease Control to Guatemala to verify the country's claims.