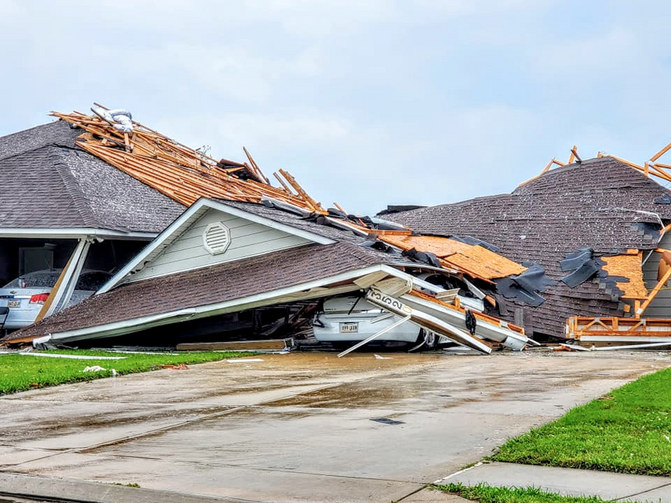 Damaged buildings and vehicles in Monroe, La., are seen in the aftermath of a tornado April 12, 2020. The National Weather Service reported April 13 that more than 30 tornadoes ripped across Texas, Louisiana, Mississippi and Georgia. (CNS photo/Peter Tuberville, social media via Reuters)

WASHINGTON (CNS) -- Two U.S. archbishops are asking for prayers, but also for help for those affected by a series of storms and tornadoes that tore through several states beginning on Easter and going into the following day, leaving more than two dozen dead.

"This Easter Monday began with the sad news that storms swept through multiple states in the South overnight, killing at least 19 people at the time of this statement across Mississippi, Georgia, Arkansas and South Carolina," they said. "The weather also inflicted significant damage in Texas, Louisiana and West Virginia. Many people have suffered damage or loss of their homes."

The death toll had climbed to 30 by mid-afternoon April 13.

"In the midst of these tragedies, we must reach out and offer assistance to those affected, especially those who are grieving the loss of loved ones," the prelates' statement said. "This situation is made even more difficult by the ongoing coronavirus pandemic.

The tornadoes uprooted homes, damaged airports and affected social distancing efforts in the middle of a pandemic as people were left homeless and were forced to seek and share shelter with others who had nowhere to go. Authorities urged those heading to shelters to use whatever they could find to protect themselves and to seek distance as much as they could to prevent spread of the coronavirus.

Mississippi was one of the hardest-hit states with a death toll of 11. The National Weather Service said at least 40 tornadoes were reported. The storms were moving east where authorities worried about the effect they could have on efforts to contain the coronavirus.

Even in the middle of destruction, the prelates' statement expressed wishes for hope, one found in the Gospel readings telling of Christ's resurrection.

"In the midst of disasters from weather and illness, we cling to this hope, that God can redeem our suffering and loss, that God is present to us even now," they said, "and that the Lord has conquered death for all time, inviting us to see him face to face in eternal life."

Show Comments ()
Comments are automatically closed two weeks after an article's initial publication. See our comments policy for more.
Provide feedback on this article
Join the conversation: Login or create an account
Before you can comment, you need to update your profile to include your first and last name, as required in our comments policy. Then reload this page and you'll be set up for commenting. Update your profile
More: US Church / Humanitarian Aid