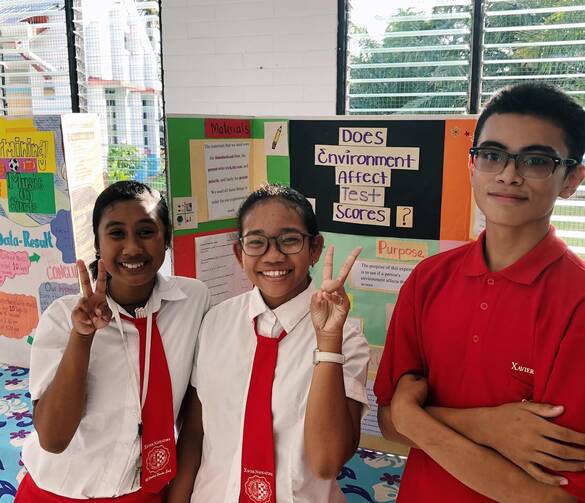 The science fair in December (photo courtesy of Xavier Micronesia).

“That sound will haunt me until I die,” Dennis Baker, S.J., said, describing the wailing that erupted among his high school students when he broke the news that this small Jesuit high school in Micronesia would be ending the academic year early. Father Baker, president of Xavier High School on Weno in the Chuuk Islands of the Federated States of Micronesia, knew how strongly the school featured in the lives of his students and their families, but he was not prepared for the reaction after he called students together on March 13 for an emergency assembly and shared the bad news.

“I just made a decision that afternoon that we really had no choice. So around 2:30, I knew that that’s what we were going to do. I drafted a letter, and at 4:30 I gathered everybody into the chapel and I just read it to them.”

Telling the students was “extremely hard,” he said. Father Baker’s letter detailed the whys of his decision to close and the next steps for students and their families. “When I got to the part telling them that this school year was over and everybody needed to get on a plane as soon as they could,” he said, “there was wailing like at a funeral.”

Xavier—which has long been supported by Jesuit’s USA Northeast Province—had been confronted by a double calamity. A persistent drought meant that water resources on Weno were growing increasingly constrained. Father Baker knew the school’s rainwater reclamation system had captured enough water to keep the school operating through the end of the term, but he could not find a way to rationalize keeping all that water on reserve when the island’s inhabitants had such a great need for it themselves.

“When I got to the part telling them that this school year was over and everybody needed to get on a plane as soon as they could,” he said, “there was wailing like at a funeral.”

There are a few wells on the island but because of the drought, they have not been able to recharge. If the coronavirus reaches the Chuuk Islands, which Father Baker had to presume would eventually happen, he decided that the school would have to share this water. “These people are going to need it, and when you empty a campus of about 200 people, that allows other people on your island to have water in an emergency situation.”

As he explained in his letter to students: “With the unpredictability of the rain, it would be unconscionable and sinful to hoard the water to ourselves. Even if the skies opened today, we would need weeks of rain to get us back to a reasonable level on the island.”

Adding to Father Baker’s concerns over rainfall, of course, was the looming threat of a landfall from the coronavirus that in early March had been making a deadly hopscotch along travel routes around the world.

Getting across the vast geography of Micronesia, which stretches from Palau and the Northern Marianas to the Marshall Islands and Kiribati, is not easy under the best of circumstances. What might happen if the connecting line of Micronesia’s lone flight path should start breaking down because of the virus?

“We get kids from all over Micronesia, which is about three million square miles of ocean,” he said. “So getting them all where they needed to go is quite a task.”

In the end he saw nothing for it but to close the school early and begin the task of organizing travel home for Xavier’s 175 boys and girls.

As at high schools across the world this month, the coronavirus put an early end to the Xavier class of 2020’s final term.

The students were aware of the threat from coronavirus, but “I think maybe they were expecting, ‘We’ll take a little hiatus and [then] re-evaluate.’ But you know, we can’t do distance learning,” said Father Baker. “Logistically we wouldn’t be able to do that.

“So if we're going to call it, we need to call it; we need to just make the decision and ride it out. But in doing that, you’re going to hurt people. It hurt me. But I really felt like we had no choice.”

Xavier is seen as a stepping-stone institution for Micronesians hoping to get their kids pointed on a path to success. Its students do not come from wealthy families. The tuition at the boarding school is just about $1,700, Father Baker said. “In lots of families, it’s a real struggle for them to come up with that, so lots of times families will pool their money in order to send a kid to us, and clans and extended families will do that to make sure a kid can come to us.”

Xavier hosts an entrance exam that each year draws 1,500 kids for 50 spots at the school. Applicants come primarily from the Republic of Palau, the Marshall Islands and the Federated States of Micronesia. “The driving force behind this school is not who has the money to pay for it,” Father Baker said. “It is who is bright enough to get in and do the work.”

As at high schools across the world this month, the coronavirus put an early end to the Xavier class of 2020’s final term. Graduation had been set for May 29, but this year there will be no celebration of their achievements.

In a normal year, graduation would have been followed by a staff and faculty party and an orderly shutdown of the school and transition home for the students. This year’s scramble to return students was stressful, but now Father Baker feels fortunate that the students have been able to return to their families, avoiding the prospect of becoming marooned on Weno far from their homes.

In the days since his decision to close the school, the coronavirus pandemic has exploded across the globe. The Federated States of Micronesia and the Marshall Islands have sealed their borders, and the “island hopper” air service around Micronesia has been suspended, Father Baker said. It is far from clear when that route will be re-established now.

Father Baker has heard comments and complaints from friends and family back in the United States about being trapped in their homes and facing unexpected scarcities at their local supermarkets. Those folks in the first world are finding out that “‘I can’t get exactly everything I want at the time that I want it. I can’t travel when I want to travel.’”

“It’s like the rest of the world is coming to realize what it’s like to be one of us.

The region’s isolation can be a curse, but as the coronavirus crisis unfolds, it should offer a temporary advantage, Father Baker said. Though Guam has reported a number of Covid-19 cases, so far the coronavirus has not made a landfall on other islands of the vast archipelago.

He remains deeply concerned nonetheless about how Micronesia will fare if it faces a significant outbreak. “When you look at the developing world, the common issues are always communication, transportation, education and health care,” Father Baker said. “That's certainly the case for us. Health care in lots of places [in Micronesia] is almost nonexistent. In fact, when you look at outer islands, it is nonexistent; there is no health care.”

He notes citizens in advanced economies are urging more hospital beds and increasing the deployment of doctors and nurses to address the crisis, resources that are simply unknown in Micronesia. And the social distancing ordered to interrupt viral spread represents a unique challenge to Micronesians. “In island life, there’s nothing more precious than land,” Father Baker said. “We live pretty close to one another.”

The island republics that make up Micronesia may be able to stand off the coronavirus for a short time, but Father Baker worries its arrival is inevitable. Then “it’s going to wreak havoc just like it’s done every other place, just worse.”