Can the church do more to ease political tension in Zimbabwe? 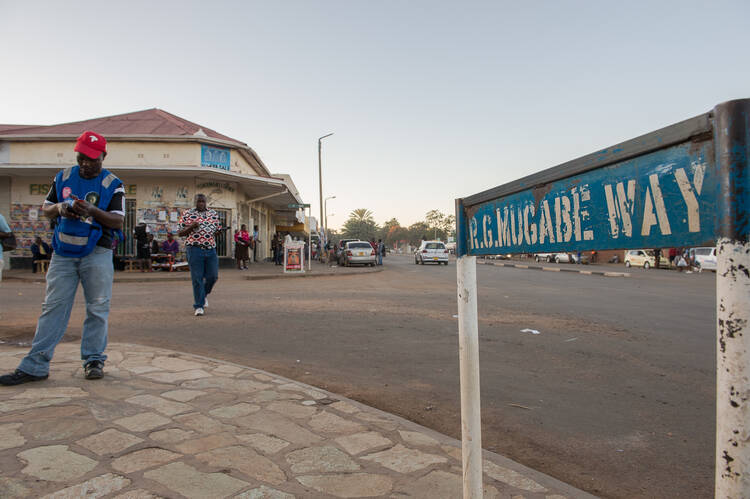 Harare, Zimbabwe—Local political observers here say there is more that the Catholic Church can do to foster unity as Zimbabwe seems to lurch from one crisis to another because of bitter divisions between the opposition Movement for Democratic Change leader Nelson Chamisa and President Emmerson Mnangagwa of the ruling Zanu PF party.

Zimbabweans showed rare unity in 2017 when they collectively marched to demand the removal of the nation’s longtime ruler, Robert Mugabe, who died in 2019. The military, then led by current Vice President Constantino Chiwenga, played a key role in elbowing out Mugabe.

The Catholic Church, through Mugabe confidant the Rev. Fidelis Mukonori, was deeply involved in that transition. Father Mukonori “brokered the negotiations between the military leaders and Mugabe,” said Pedzisai Ruhanya, director of the Zimbabwe Democracy Institute.

Many now hope the church will repeat that activist role as political divisions depress the economy and the living conditions for average Zimbabweans, and as a severe drought threatens a hunger crisis for millions this year. The church has “to go back to Mnangagwa and tell him that people are not happy with the way things have turned out after the removal of Mugabe,” Mr. Ruhanya said.

Many hope the church will repeat that activist role as political divisions depress the economy and the living conditions for average Zimbabweans, and as a severe drought threatens a hunger crisis for millions this year.

“I want to say the church is doing something; we might not say it is doing enough,” Paul Muchena, the national coordinator for the Catholic Commission for Justice and Peace in Zimbabwe, told America. “The church is working on some programs and efforts to promote peace and to deal with political conflict in the country,” he said. “However, we need to do more as the church because, as far as we are concerned, the situation in Zimbabwe is constantly deteriorating, be it on the social, economic or political front.”

He added that the church has been pursuing efforts to foster national cohesion and to promote peace and justice in a bid to diffuse political tensions through robust engagements with the two main political parties as well as through the National Peace and Reconciliation Commission.

“We have engaged the M.D.C. and Zanu PF leaders, as well as their youth league leaders,” he added. (The youth wings of the main political parties are often the ones held responsible for acts of political violence.)

“There is always political animosity here and there when we engage the political parties together,” Mr. Muchean said, “but with strong facilitation we have been having successful engagements. But of course more needs to be done. The main issue we have been discussing with the main political parties in Zimbabwe was the preamble of the constitution and its requirement on promoting peace and social cohesion in Zimbabwe.”

Zimbabweans have been bitterly divided since Mr. Mnangagwa came to power. The president has used the police to quash demonstrations against his rule.

After being thrust into power, Mr. Mnangagwa won a 2018 election, but its outcome is still contested by the M.D.C. opposition. A former South African leader, Thabo Mbeki, has been brokering talks between Mr. Mnangagwa and Mr. Chamisa, but many believe political reconciliation would be faster if the church joined the negotiations.

According to Mr. Ruhanya, the church in Zimbabwe has been “more on the side of the state,” although church leaders have “been frank with the government in terms of criticizing violations of citizens’ rights and against the violence that has been breaking out.”

Zimbabweans have been bitterly divided since Mr. Mnangagwa came to power. The president has used the police to quash demonstrations against his rule, especially after deadly protests rocked Zimbabwe because of fuel price increases last year.

“It is basically them against us; the country is divided,” Mr. Chamisa said in an interview with America from the sidelines of an opposition rally in early February. “The police deny us our rights to protest and demonstrate, so there is no peace to talk about because we have a political party that is hanging on to power by hook and by crook.”

Mr. Mbeki was in Harare at the end of 2019, when he sought to bring Zimbabwean political parties together, but the process appears to have stalled. He is expected back in Harare in the next few weeks to assist negotiations between Mr. Mnangagwa and Mr. Chamisa, viewed as the most viable way forward for the nation.

Mugabe and the late former opposition leader, Morgan Tsvangirai, cobbled together a unity government in 2009 after contested elections in 2008. That unity government helped stabilize Zimbabwe’s economy, which since then has stagnated. The International Monetary Fund reported on Feb. 26 that after contracting in 2019, economic growth in Zimbabwe for 2020 will be near zero percent. Many Zimbabweans now want Mr. Chamisa and Mr. Mnangagwa to attempt the same unity government to end bitter divisions and the political and economic crisis engulfing the country.

“All we want is for the country to move forward and to have an arrangement that can help end our suffering,” said 44-year-old farmer Tatenda Mapinginyu of Banket, near Harare. “People have suffered enough and in the communities we are seeing more and more divisions because of politics—those supporting the ruling party do so only because they are benefiting somehow.”

Archbishop Ndlovu told local Catholic media, “Each political side has to play its role in addressing economic problems by acknowledging weaknesses in administering the country’s resources.” He added, “I prefer dialogue than [political] matches, which are a show-off. There is strength in dialogue; we achieve more by dialoguing than [political demonstrations]. Our solutions lie in dialogue.”

Hoping to break through the political gridlock, the Zimbabwe Heads of Christian Denominations, a group that includes the Zimbabwe Catholic Bishops’ Conference, released a joint pastoral statement in October. The Chrisitian bodies called for a political sabbath—that is, the suspension of all political races for a period of seven years—“to allow for the rebuilding of trust and confidence, reset our politics and chart a shared way forward towards a comprehensive economic recovery path in a non-competitive” political environment.

The Rev. Frederick Chiromba, general secretary of the Zimbabwe Catholic Bishops’ Conference, explained that the sabbath would “enable national cohesion before we enter a political contest.”

Gilbert Mardai, S.J., pro-vice chancellor for the Arrupe Jesuit University in Zimbabwe, said that the current political conflict in Zimbabwe was a threat to civic peace. He hopes for more dialogue among the major political party leadership and believes the university could facilitate those discussions.

Father Mardai said Arrupe University is attempting to “create an atmosphere that is nonpartisan so that it allows for reflection on matters that are critical in society.” He said the university would provide a platform to “look at the objective way forward” for Zimbabwe.

“We would want this to be a place where those issues can be discussed in an atmosphere of comfort and safety,” he said of the university. “People can come here from Zanu or M.D.C. or the other parties ...and feel secure and discuss; it has to be simply having a dialogue…. When they [political leaders] are here it has to be objective and sober dialogue.

“The politicians will have to do their politics, but they need to have an informed mind and they should be able to do critical reflection when they are here as a platform for peacebuilding and uniting the country,” he said.

Mr. Mnangagwa claims to understand the demands for peace and unity from average Zimbabweans. He said in February that he was hopeful that Mr. Chamisa would join a dialogue among political actors in the country sponsored by the government.

But Mr. Chamisa has said that real dialogue to foster peace and unity has to be between the main players and should not include smaller political players, which opposition leaders argue are beholden to the Zanu PF. No date has been set for these unity negotiations.

@tawakarombo
Show Comments ()
Join the conversation: Login or create an account
Before you can comment, you need to update your profile to include your first and last name, as required in our comments policy. Then reload this page and you'll be set up for commenting. Update your profile
Show Comments ()
Comments are automatically closed two weeks after an article's initial publication. See our comments policy for more.