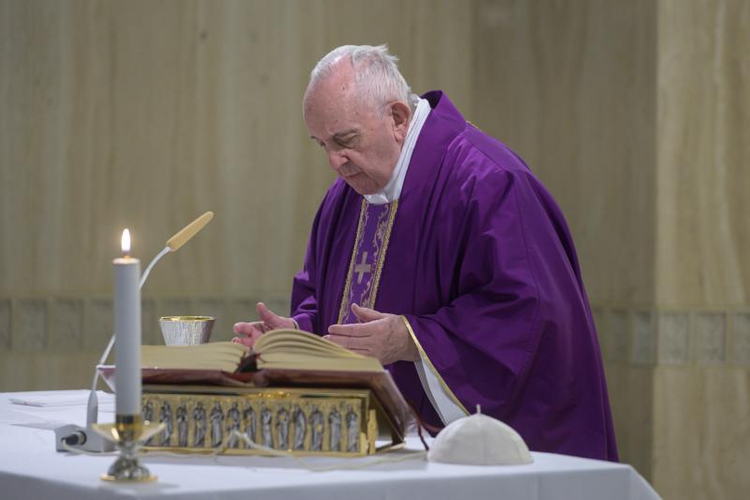 Pope Francis celebrates morning Mass in the chapel of his residence, the Domus Sanctae Marthae, at the Vatican March 11, 2020. (CNS photo/Vatican Media)

VATICAN CITY (CNS) -- Pope Francis dedicated his third livestreamed morning Mass to prisoners suffering because Italian government measures to stop the spread of the coronavirus have included the suspension of visits by family and friends.

"We continue to pray for the sick of this epidemic," the pope said before reciting the opening antiphon of Mass March 11.

"Today, in a special way," he said, "I want to pray for prisoners, for our brothers and sisters locked up in prison. They suffer, and we must be close to them with our prayer that the Lord would help them, console them in this difficult moment."

Riots broke out in several Italian prisons March 7 after the Italian government announced the suspension of family visits to prevent the spread of the disease; the prisoners also demanded the government take action to reduce overcrowding in the prisons because the situation could facilitate contagion. A dozen prisoners died, the Italian news agency ANSA reported, and 19 prisoners escaped.

After the Italian government announced March 8 the suspension of all public gatherings, including the public celebration of Mass, the Vatican began live broadcasts of the pope's early morning Mass in the chapel of his residence, the Domus Sanctae Marthae. And March 11, it also began broadcasting the daily recitation of the Angelus prayer at noon, led by Cardinal Angelo Comastri, archpriest of St. Peter's Basilica.

In his homily March 11, Pope Francis focused on the prophecy of how Jesus would die and on the ways Satan attacks people: "seduction" or temptation and "fury" or torment.

In the day's Gospel reading from Matthew, Jesus tells his disciples, "the Son of Man will be handed over to the chief priests and the scribes, and they will condemn him to death, and hand him over to the Gentiles to be mocked and scourged and crucified."

"This isn't just a death sentence," the pope said. "There's more. There's humiliation. There's fury. And when there is rage in the persecution of a Christian, of a person, there is the demonic."

Two thieves were crucified with Jesus, he said, but they were left alone while Jesus, hanging on the cross, was tormented and derided.

The devil has no "half measures," the pope said. "His arrogance is so great that he tries to destroy, and he destroys while enjoying that destruction with rage."

Pope Francis recalled the deaths of many martyrs who are not just killed but are tortured and humiliated first, and he specifically mentioned Asia Bibi, the Pakistani Catholic woman acquitted of blasphemy in 2018 after years on death row. She was accused of blasphemy after a dispute over a cup of water.

"Don't confuse a simple social, political or religious persecution with the rage of the devil," he said. "The devil gets enraged to destroy."

Show Comments ()
Comments are automatically closed two weeks after an article's initial publication. See our comments policy for more.
Provide feedback on this article
Join the conversation: Login or create an account
Before you can comment, you need to update your profile to include your first and last name, as required in our comments policy. Then reload this page and you'll be set up for commenting. Update your profile
Advertisement
More: Prisons