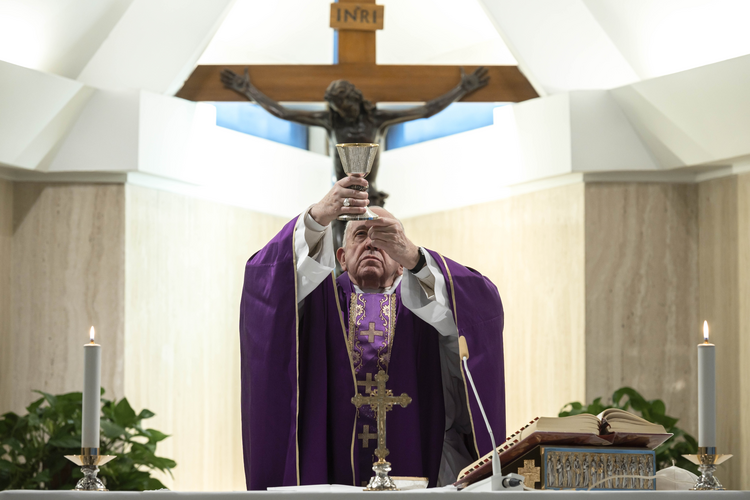 Pope Francis celebrates Mass in the chapel of his residence, the Domus Sanctae Marthae, at the Vatican March 10, 2020. For the second day this week the pope celebrated Mass without a small group of the faithful in order to avoid the risk of spreading the coronavirus. (CNS photo/Vatican Media)

VATICAN CITY (CNS) -- Pope Francis prayed that priests would find the courage to visit those who are sick and offer accompaniment to health care professionals and volunteers working during the coronavirus epidemic.

During a live broadcast of his daily morning Mass, Pope Francis again prayed for the many people who have fallen ill because of the virus and for health care workers.

"Let us also pray to the Lord for our priests, so that they have the courage to go out and go to those who are sick, bringing the strength of the word of God and the Eucharist and to accompany health care workers and volunteers in the work they are doing," he said March 10 at the start of the Mass at the Domus Sanctae Marthae.

The Italian government issued a late-night measure March 9 extending "red zone" restrictions already in place in the north to all of Italy, urging people to stay at home and avoid all unessential travel as part of already implemented plans to prevent the further spread of the virus.

The normally private daily Masses were being broadcast live on Vatican News and the Vatican YouTube channel to help people still be united in prayer with the pope, the Vatican had said.

In his homily, the pope reflected on the first reading in which God tells the prophet Isaiah that even though people's sins are like "scarlet," the Lord will make them "white as snow" if people are willing and obey his command to set things right.

The pope invited people to use the time of Lent to speak to God honestly about their sins because he is able "to change everything."

Like Adam and Eve, people often try to hide from God when they realize they have sinned, he said. Instead, "do not be afraid to come and talk, have courage even in your misery" and shame, the pope said.

Another way people try to hide is by putting on appearances of not being a sinner and by proudly showing off their adherence to God's laws or their acts of charity, he said.

"Vanity never heals. Rather it is poison, bringing disease to the heart, that hardness of heart that tells you, 'No, don't turn to the Lord, don't go. Stay," believing oneself as self-sufficient.

"Speak with the Lord. He knows, he knows who we are. We know too, but vanity always calls us to cover ourselves" and hide, the pope said.