Jesuit Father Fernando Cardenal, who worked with Sandinistas, dies at 82 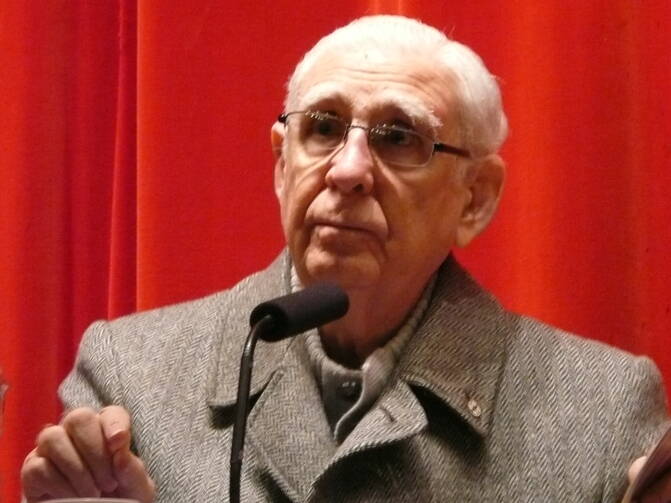 Jesuit Father Fernando Cardenal, who worked for years to promote education in Nicaragua, died Feb. 20 after complications from an abdominal operation. He was 82.

Father Cardenal, who was expelled from the Jesuits in 1984 for his involvement in Nicaragua's Sandinista government, was readmitted to the order in 1997. He served as the country's education minister, 1984-1990, under President Daniel Ortega. He remained a priest, although he could not exercise his ministry because he lacked the necessary authorization of a bishop or religious superior.

His funeral was Feb. 21 at Jesuit-run Central American University in Managua.

Less than six months after being readmitted to the Society of Jesus, Father Cardenal told Catholic News Service he had no regrets about the past, but said he would never leave the Jesuits for politics again.

"I firmly believed I was following God's wishes," he said. "Under the same circumstances, I'd do the same again," he said, but he added quickly, "I'd never accept another government post."

He was one of four priests—including his older brother, Father Ernesto Cardenal, who accepted Nicaraguan government posts after the 1979 Sandinista revolution. The Sandinista movement, of which he was a part since 1973, had just driven the Somoza dynasty from power and was faced with forming a new government on its own. Nicaragua was bankrupt and its infrastructure partially destroyed.

"It was an exceptional moment ... there were so few of us who had any grounding,'' he told Catholic News Service.

As education minister, he was in charge of the national literacy crusade, during which the country's illiteracy rate dropped from an estimated 51 percent of the adult population to 12.9 percent. Some 100,000 young Nicaraguans taught more than four times that many adults to read and write in less than half a year. The effort was awarded with the UNESCO's Nadeshda K. Krupskaya Prize for Literacy.

After he was readmitted to the Jesuits, he worked at Central American University, where he divided his time between ministering to the students and teaching theology. He later headed the social justice organization Fe y Alegria in Nicaragua.

In a 2015 story published in National Catholic Reporter, Father Cardenal told Americans from the Volunteer Missionary Movement he had never spoken to a poor or indigenous person during his time as seminarian until, in 1970, he moved to a poor neighborhood outside Medellin, Colombia. When sent to purchase bread for the Jesuits, he came home empty-handed, because he said he could not look into the faces of hungry children.

When it was time for him to return to Central America, his neighbors did not want him to leave, he said in the National Catholic Reporter story.

"I said to my neighbors: 'I have to go back, but I want to leave something of me with you all. I want to leave you a promise, a very solemn promise in the face of God, that I will dedicate my life to the liberation of the poor and to the struggle for justice,'" he said he told the Colombians.