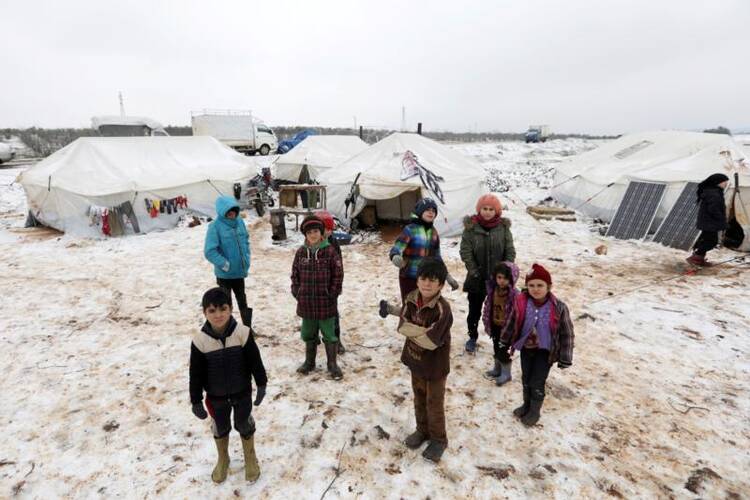 AMMAN, Jordan (CNS) -- Syrian government forces and Russian warplanes are bombing Idlib province, while tens of thousands of people are sheltering under strips of plastic tenting in the freezing cold and snow. Others are fleeing the explosions, crammed in trucks with few of their earthly possessions, heading to the already packed northern border frontier, closed by Turkey.

"The ground in Idlib trembles, people flee and the cries of those who have nothing left get lost in the snow," reported Pro Terra Sancta, which supports the work of two Franciscan friars and others in Idlib province and nearby Aleppo. "Yes, because it has been snowing for days in the province of Idlib, in northern Syria, and bombs fall incessantly."

In a video appeal to Pope Francis, one of the friars, Father Hanna Jallouf, said: "Please, I beg you to pray also for our peace, for our homeland and for our area, because there are so many refugees and so many refugees are without a roof and without food. We are in human misery."

Pro Terra Sancta, based in Jerusalem and Milan, supports the Franciscan Custody of the Holy Land, which includes Franciscans in Syria. Andrea Avveduto, communications chief, told Catholic News Service: "A child died while being carried by his father on the way to the hospital. The father decided to bring the sick child to hospital and had to walk for two hours to get there. But by the time they arrived, the child was already dead from the cold.

"Idlib is experiencing a huge problem. It's one of the biggest humanitarian crises since the beginning of Syria's war in March 2011. It's under siege by the Syrian regime because of the jihadists and rebels which fled there from other parts of Syria," Avveduto told CNS.

Fathers Jallouf and Louai Beshara "are serving those in need, including Christians, in the villages of Knayeh and Yacoubieh, but many have nothing to eat or drink and there is bitter cold. More than 10 children died last week alone from the freezing temperatures. A lot of people continue to die. The situation is very dramatic, really terrible," he added.

Christians in these villages are also caught in the crosshairs of the jihadists, who occupy these places, and the bombing by Syrian government forces and Russian warplanes.

Father Jallouf made his appeal for help and prayers as more than 50 Catholic bishops and patriarchs from countries bordering the Mediterranean Sea met Feb. 19-23 in Bari, Italy. Pope Francis was scheduled to join the bishops Feb. 23. They will consider how to address dire events unfolding in the region.

Michelle Bachelet, the U.N. human rights chief, called on Syria and its allies to permit safe humanitarian corridors to be set up in the conflict areas. She said it was "cruel beyond belief" that civilians live under plastic sheeting in sub-zero conditions while their homes are bombed.

But Syrian President Bashar Assad has promised to press forward with a military campaign that the U.N. said has displaced more than 900,000 people from their homes since the start of December. That represents the largest displacement of people since the civil war broke out in Syria.

"Children and families are caught between the violence, the biting cold, the lack of food and the desperate living conditions. Such abject disregard for the safety and well-being of children and families is beyond the pale and must not go on," said Henrietta Ford, executive director of the U.N.'s children agency, UNICEF.

The United Nations estimates 60 percent of those affected are children, while 21 percent are women.

Meanwhile, Avveduto said Syria's former commercial hub of nearby Aleppo remains a bombed-out shell. Although Pro Terra Sancta has supported many in the country's second-largest city to sustain their living conditions throughout the hostilities, "Aleppo's lack of water, electricity, fuel and food, means we have an even bigger problem there, because people are hungry, they have nothing to drink, and they don't have work," he told CNS.

"Companies and factories haven't reopened. People waited for the rebirth of the city, but it hasn't happened. Aleppo is forgotten by the world, but the economic needs of the city are bigger than ever before," he said.

Government troops, backed by intensive airstrikes from Russian and Syrian jets, captured more than 30 villages around Aleppo Feb. 15 and 16. Analysts say this has put Aleppo out of reach of rebel fire for the first time in years and cemented government control over the vital highway linking Aleppo to the capital, Damascus.

Mark Lowcock, the U.N. undersecretary-general for humanitarian affairs, said "the biggest humanitarian horror story of the 21st century" could only be avoided with a cease-fire.

He said babies and small children were dying from the cold as people are forced to sleep in open fields and under trees in freezing temperatures because camps are full.

"We are now receiving reports that settlements for displaced people are being hit, resulting in deaths, injuries and further displacement," he added.

Lowcock said a major relief operation being managed from across the border in Turkey was being overwhelmed.

Turkish President Recep Tayyib Erdogan said in mid-February his military's intervention in Idlib is "imminent" to confront Syrian government gains there. Erdogan has backed militant dominance in Idlib province and does not want to receive more Syrian refugees in Turkey.

Dale Gavlak - Catholic News Service
Provide feedback on this article
Join the conversation: Login or create an account
Before you can comment, you need to update your profile to include your first and last name, as required in our comments policy. Then reload this page and you'll be set up for commenting. Update your profile
Show Comments ()
Comments are automatically closed two weeks after an article's initial publication. See our comments policy for more.