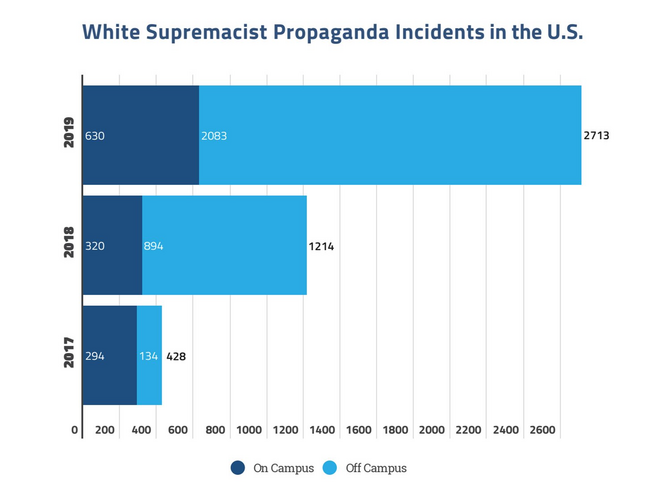 This chart, from the Anti-Defamation League's Center on Extremism, shows an increase from 2017 to 2019 in white supremacist propaganda incidents in the U.S. (AP Photo/ADL)

(RNS) — White supremacist groups doubled down on colleges and universities across the country in 2019, blanketing campuses and off-campus haunts with propaganda, according to a new report from the Anti-Defamation League's Center on Extremism.

The report found a total of 2,713 cases of leafleting on and off campus — an average of more than seven per day— nationwide, compared with 1,214 in 2018. That makes it the highest year on record for such activity in the United States.

Instead of overtly targeting Jews, Muslims, blacks and other ethnic groups, the largest of the white supremacist groups are using patriotic slogans such as "Defend America" superimposed on the U.S. flag to veil their messaging.

"These groups are trying to use patriotism to appear mainstream," said Carla Hill, a senior investigator with the ADL's Center on Extremism. "'Defend America' sounds patriotic but when it's backed by a white supremacist website we want to call it what it is."

Hill said the idea is to appeal to a broader range of young people, some of whom may not yet embrace white supremacist ideals.

The growth in numbers and activities has worried law enforcement, too.

Last week, FBI Director Christopher Wray testified before the House Judiciary Committee, saying, "The most persistent threats to the nation are from homegrown violent extremists."

Wray said the FBI is placing the risk of violence from such groups "on the same footing" as threats posed to the country by foreign terrorist organizations such as ISIS, the Islamic State group.

The ADL report found that white supremacists targeted a total of 433 campuses in 43 states and the District of Columbia in 2019.

While dozens of white supremacist groups were active, the ADL report said, 90% of the leafleting was the work of three groups: the Patriot Front, the American Identity Movement and the New Jersey European Heritage Association.

The groups typically work under the cover of dark and videotape their actions.

The Texas-based Patriot Front was the most active, distributing propaganda with messages such as "One Nation Against Invasion," "For the Nation Against the State" and "America is Not for Sale."

The most overt anti-Semitic distributions came from the Daily Stormer Book Club, whose leaflets say all hate crimes are hoaxes, the Holocaust is fake news and Jews molest children and "push" pornography "on our children."

The report suggested that America's Klan movement continued its decline in 2019. So too did the number of white supremacist events and demonstrations. There were 76 "flash demonstrations" in 2019. Those are not publicized in advance and attendance tends to be spotty.

"They see campuses as bastions of liberal thinking and they want to take the opportunity to inject their extreme-right ideology into an area where their voice isn't heard," said Hill. "That's why they go on campus. It's very purposeful."

Yonat Shimron - Religion News Service
Provide feedback on this article
Join the conversation: Login or create an account
Before you can comment, you need to update your profile to include your first and last name, as required in our comments policy. Then reload this page and you'll be set up for commenting. Update your profile
Show Comments ()
Comments are automatically closed two weeks after an article's initial publication. See our comments policy for more.