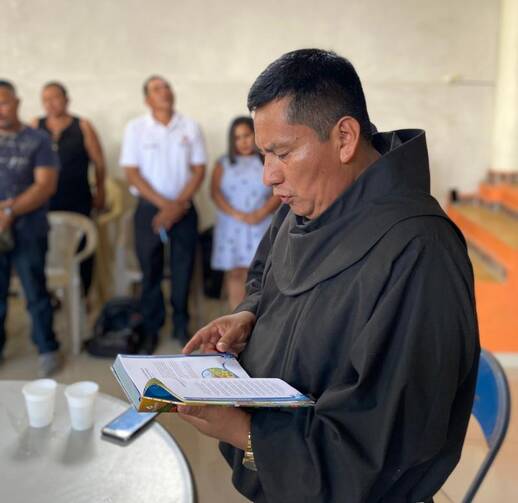 Franciscan Father Avelino Verdugo opens a meeting with a prayer Jan. 30, 2020, in of Gualaco, Honduras. Father Verdugo is a leader of the local Justice, Peace and Integrity of Creation Committee. (CNS photo/Mary Durran)

GUALACO, Honduras (CNS) -- In remote rural swathe known as the Wild West of Honduras, said to be a bandits' hideout where it is "easy to get in, tough to get out," the church finds itself once again at the forefront of a movement for justice.

Only this time, 45 years after two priests were among a massacre of peasants demanding land and human rights, the focus has a decidedly green hue.

"Don't sell your conscience for 200 lempiras," (US$9) was the message of Franciscan Father Avelino Verdugo, a leader of the local Franciscan Justice, Peace and Integrity of Creation committee, to the population of the neighboring San Esteban municipality.

The people are being courted by the representatives of 89 mining concessions that have mushroomed since 2017 in the department of Olancho; the concessions cover almost 5% of Honduras' largest department. But these are not typical large international mining companies, they are small-scale mines registered mostly by Honduran individuals unknown to the local communities.

Before a November 2019 information meeting in which mining representatives wooed the community of San Esteban, the population reported being offered bribes to support the project to mine barium sulphate, used to produce barium for medical uses and mudflaps on vehicles. But then Father Verdugo, other committee members and representatives of the Tegucigalpa-based Honduran Centre for the Promotion of Community Development, known by its Spanish acronym as CEHPRODEC, presented the other side of the story. And when they left the meeting, they were followed by two vehicles, losing their pursuers only when they drove 85 miles per hour.

"As Christians, we are called to promote the values of justice, peace, truth, love and solidarity -- 'peace and all good,'" Father Verdugo said. "We have an ethical and moral responsibility to work against the anti-values of those who damage the environment."

For the JPIC committee, this means telling people the truth about mining and its impact.

"We told the people that the miners don't tell the whole truth, that mining would not bring the cash windfall that people imagine, and that the promised royalties, clinics and schools rarely materialize," Father Verdugo said.

The justice committee members reflected on the changes their activities have brought to San Esteban.

"People used to live very comfortably in San Esteban, and they focused on their own personal and material interests," said member Angel Aguilar. "But the arrival of the JPIC committee has shown people a way to put faith into action, and most of the rest of the community see the activities as very positive."

In Gualaco, the newly formed Pro-Life Environmental Committee can hardly get enough of the words of Father Verdugo and the other committee members who shared their experience of resisting the new mines. Twelve new concessions for metallic mining have been granted in Gualaco. The population already has had a brush with a small-scale iron oxide mine that closed in 2016 after three years' operations; it contaminated the water supplies of 11 hamlets.

With its slogan, "No to Mining, Yes to Life," the 25 members of this pro-life environmental committee are led by catechist Elvin Sarmiento, who supports the parish priest by leading prayer services and helping with preparations for the sacraments. In fact, many of the members of this committee are also pastoral delegates, serving the rural communities. In Gualaco, the committee has quickly galvanized the support of the 11 local water boards and owners of medium-size cattle ranches. One committee member, Jose Rolando Sarmiento, was elected as municipal commissioner.

Last September, members of the Pro-Life Environmental Committee went to City Hall and demanded information from Mayor Roque Escobar on the metallic mining concessions granted. Committee members believe the concession owners, unknown Tegucigalpa-based business leaders, are fronts for more powerful sectors connected to the drug traffickers active in the region and to the Honduran government. When the mayor said he had no information, committee members said they would not leave until he signed an agreement pledging that the mining concessions would not touch the micro basin that provides the community with water. Escobar signed.

After pressure from the committee, with the support of the parish priest and CEHPRODEC, a nonbinding consultation on mining was held at the church hall Oct. 12. More than 95% of the nearly 2,000 present voted against the mining projects.

But although the community consultations have political weight, they are not binding.

"What we want now is a plebiscite," said Father Verdugo.

A plebiscite, said Donald Hernandez, director of CEHPRODEC, would be run under municipal laws that oblige consultation with the local population before initiating mining and other extractive projects.

In the meantime, the communities keep up their struggle to keep the miners out. This brings threats and intimidation from the pro-mining sector, which, in many cases, has the support of the local mayors. In Olancho, five of the 23 municipalities actually own mining concessions.

While the communities can use the law and popular pressure to keep these mining projects at bay, they feel weaker in the face of illegal mining activities near the parish of Santa Ana in Campamento. Locals have taken clandestine videos of armed men extracting ore at the Guayape River, and Franciscan Father Isidoro Mejia, the parish priest, confirmed that red earth is being transported from Guayape to neighboring Concordia and then up to ports on the north coast.

Father Mejia said the parish monitors environmental issues as part of its Good Samaritan actions that have been on the parish agenda since the Fifth General Conference of the Bishops of Latin America and the Caribbean in Aparecida, Brazil, in 2007. He said that, in recent months, the road between the two communities has been improved. He fears that water from a pristine waterfall in Guayape that supplies the community of Concordia could be diverted to serve the illicit mining operations.

In recent years, the army has tried to stop illegal mining, but the practice continues. The communities are determined to put a brake on the mining concessions granted by the government.

"Pope Francis calls us to all work for the care of creation and ensure that the encyclical 'Laudato Si'' is put into action," said Father Verdugo. "We must leave something here for future generations."

He said he sees the justice issues paying off.

"If we hadn't sounded the alarm over the attempts to turn the department into a huge mine, then the mining companies would already be here," the priest said. "If we let just one mining company in, they'll all be in."