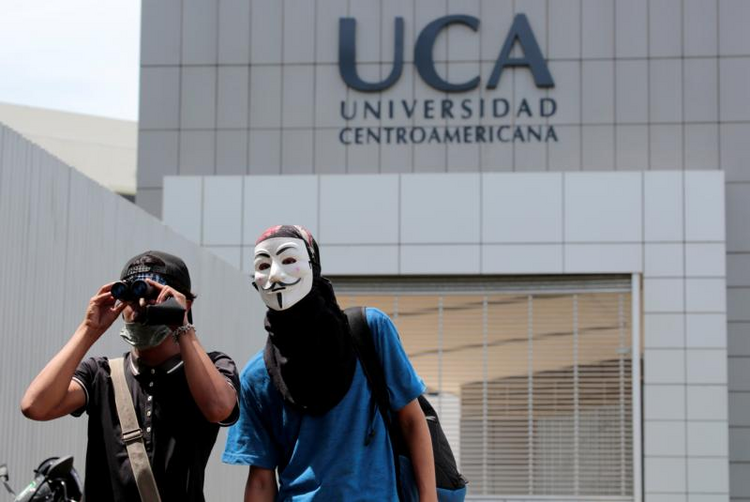 A demonstrator uses binoculars during a protest against Nicaraguan President Daniel Ortega's government in front of Central American University in Managua Oct.1, 2018. The university has been a focal point of opposition to the regime of Ortega and his wife, Vice President Rosario Murillo; protesters have demanded their ouster since 2018. (CNS photo/Oswaldo Rivas, Reuters)

MEXICO CITY (CNS) -- Jesuit provincials have demanded that Nicaraguan authorities end a "campaign of slander and aggressions" against the Jesuit-run Central American University in Managua and its rector, Jesuit Father Jose Alberto Idiaquez, "as well as other institutions and people linked to the Society of Jesus in Nicaragua."

A Feb. 7 statement published the conference of Jesuit provincials of Latin America and the Caribbean and signed by more than 90 supporters -- including many affiliated with Jesuit institutions -- said it would "hold responsible" the president for any harm affecting staff or students at the school.

"We deeply regret that the political crisis in Nicaragua continues to worsen and the possibility of dialogue between the government and the opposition has been interrupted, with the result being an increase in the suffering of the Nicaraguan people," the statement said.

"We denounce in the most firm and ample way possible ... the constant financial, economic and physical siege the (university) has been subject to in recent times," the statement continued.

The "siege" refers to the university not receiving its share of the federal budget earmarked for education, as it did in the past.

The Central American University has been a focal point of opposition to the regime of President Daniel Ortega and his wife, Vice President Rosario Murillo. Protesters have been demanding their ouster since 2018.

The school has offered refuge to those protesting; at times, it has been surrounded by security forces.

Observers in the country say protests now are met with immediate repression from police and paramilitaries. Ortega and Murillo have referred to protesters and those arrested as "coup mongers," a label also applied to Catholic priests and institutions providing spiritual support and shelter for protesters under attack.

"We denounce the lying and slanderous hate media campaign, which -- with government complacency -- has occurred over the past week against the (university) and the Jesuits, its collaborators and, in particular, Father Idiaquez, whom we fully support in his service," the statement said.

"We hold Mr. Daniel Ortega and Mrs. Rosario Murillo responsible for the security, the life and the integrity of the (university) and each one of its members."

Show Comments ()
Comments are automatically closed two weeks after an article's initial publication. See our comments policy for more.
Provide feedback on this article
Join the conversation: Login or create an account
Before you can comment, you need to update your profile to include your first and last name, as required in our comments policy. Then reload this page and you'll be set up for commenting. Update your profile
Advertisement
More: Latin America