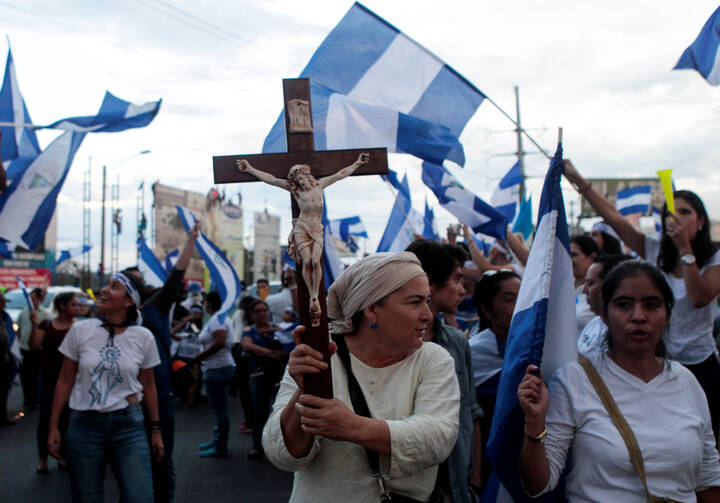 A demonstrator holds a crucifix during a protest against Nicaraguan President Daniel Ortega's government in Managua, Nicaragua, May 15. (CNS photo/Oswaldo Rivas, Reuters)

MEXICO CITY (CNS) -- The Jesuits' Central America province has warned that the rector of Jesuit-run University of Central America in Managua, Nicaragua, has received death threats for his participation in a national dialogue convened by the country's Catholic bishops to reach a peaceful end to weeks of unrest and government repression of protesters.

Jesuit Father Jose Alberto Idiaquez "has been threatened for his participation in the (dialogue), for putting himself at the side of students, for defending the human rights of those who are peacefully and legitimately demanding their constitutional rights, for making continuous calls on the Nicaraguan government to provide concrete signs that the peace it says it's seeking is the product of justice and a democratic compromise," the Jesuits said in a June 1.

What I saw at the Mother’s Day massacre that stunned Nicaragua
Brian Strassburger, S.J.

Father Idiaquez has supported the students who have taken to the streets only to be violently attacked by police and paramilitary forces. He ordered university security personnel to open the school's gates May 30 and allow thousands of protesters to seek shelter on campus after police and paramilitaries fired on them during a peaceful march.

Violence in Nicaragua has claimed about 100 lives since April 18, when protests erupted over reforms to the social security system.

The protests quickly turned to discontent over accusations of corruption and authoritarianism against President Daniel Ortega and his wife, Vice President Rosario Murillo. Both have refused calls to step down.

Elsewhere, a Catholic church in Masaya came under siege June 2, where a priest, advocates and medical personnel were working, according to media reports.

Violence in Nicaragua has claimed about 100 lives since April 18.

The Nicaraguan bishops' conference had convened a national dialogue, but suspended its participation as a mediator and witness in May as talks broke down.

Outspoken clergymen have come under threat, including Auxiliary Bishop Silvio Jose Baez Ortega of Managua, who has used social media to call for peace, denounce government excesses and show support for protesters.

On May 31, The Inter-American Commission on Human Rights ordered protective measures be provided to Bishop Baez because of death threats.

"The commission further received report (the bishop) and his family are on a list of people who need to be 'wiped out' and that suspicious persons are constantly watching his family's home," the statement said.