Bushfires are a call to action, prayer and reflection in Australia

Bushfires are a call to action, prayer and reflection in Australia 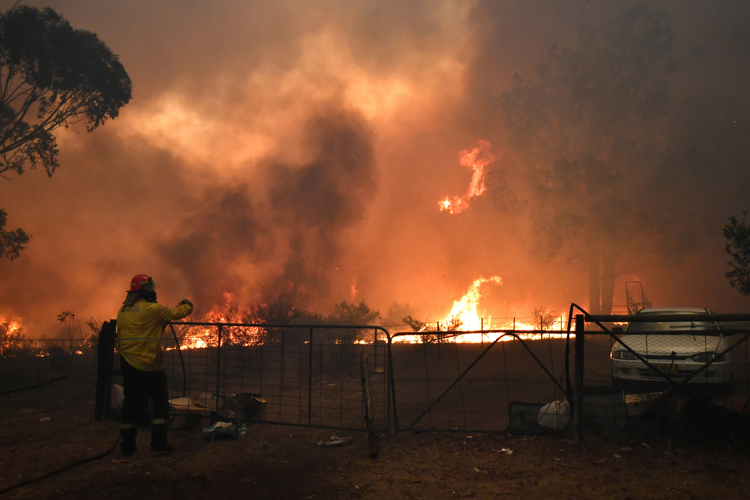 Rural Fire Service crews engage in property protection during wildfires along the Old Hume Highway near the town of Tahmoor, Australia, outside Sydney, Dec. 19, 2019. Wildfires have been burning since August and have destroyed an area comparable to the combined region of the Netherlands and Belgium. (CNS photo/Dean Lewins, AAP via Reuters)

Catholic churches and volunteers have been joining fellow Australians in offering prayers and providing much-needed disaster relief to people caught up in the bushfire crisis playing out across the country. At the same time, the nation’s Catholics have started to reflect on their long-term responsibilities in the face of this unprecedented environmental catastrophe.

By the end of the first week of January, 25 people had been killed and many more had been injured. An estimated one billion animals have perished, and over six million hectares of land—around 24,000 square miles—have been devastated by the fires, which have been burning since September. Entire towns have been evacuated, and thousands of homes have been lost.

The Rev. Tony Percy, the vicar general for the Archdiocese of Canberra and Goulburn, said that two parishioners have died in fires in his archdiocese and 13 have lost their homes. These are only preliminary figures; the numbers are expected to rise.

Parishioners in Kiah on the southern coast of New South Wales have lost their church; it had been opened in 1929 after bushfires destroyed the original building in 1926.

“Let’s pray together, let’s work together and let’s stick together in this time of crisis,” Father Percy urged parishioners.

By the end of the first week of January, 25 people had been killed and many more had been injured. An estimated one billion animals have perished, and over six million hectares of land—around 24,000 square miles—have been devastated by the fires.

One of the largest charitable organizations in Australia, the St. Vincent de Paul Society, has contributed to the bushfire response in all affected states and territories. Through their Vinnies Bushfire Appeal, the society is providing food for evacuees as well as clothing, household items and financial assistance to those recovering from bushfires.

Organizations like “Vinnies,” as society members are known in Australia, will be working for the long term. “Disasters don’t just go away,” said Rick Williams, a volunteer assisting in Queensland. “We’ll be there, no matter how long it takes.”

The society’s national president, Claire Victory, said in a statement that “once the smoke has literally settled, and the extent of the devastation dawns on individuals, families and whole communities, the society will be there to help with the recovery process as people begin to rebuild their lives.

“Right now, cash is needed. People can donate by visiting the Vinnies website or through our shops,” she added. “Cash is the most useful contribution at this point in time.”

The Rev. Peter Slater is the vicar general of the Diocese of Sale—which includes the fire-ravaged East Gippsland region of Victoria, where he serves as a parish priest—and he has been in the area supporting parishioners and clergy.

“Many homes have been destroyed by fire,” Father Slater told America. “Many farm sheds and much equipment has been destroyed. Much of the bush has been burnt, and much native wildlife has probably been killed as well as farm stock.”

But the community response has been overwhelming, Father Slater said. People have donated goods and, importantly, money, so that local businesses can continue to operate.

“One item that is welcome is hay,” he said. “Truckloads have been making their way to East Gippsland to be distributed to farmers and their stock. The sight of these trucks brings new heart to many, not just farmers.”

Archbishop Mark Coleridge, the president of the Australian Catholic Bishops Conference, has described the bushfire crisis as “an unprecedented calamity.”

Australian churches have been involved in disaster relief from the outset of the crisis. Emergency ministers from the Victorian Council of Churches are offering support and care for people at relief and evacuation centers.

“Individual Catholic people are among the services: firefighters, police and emergency services, military,” Father Slater said. “The relief center I visited had a St. Vincent de Paul area along with the Salvation Army, Red Cross and local government personnel.

“These Vinnies members included volunteers from further afield to share the load with the local members,” he added.

The Order of Malta in Australia has announced the organization will be accessing its National Disaster Fund and working with affected parishes and dioceses to direct relief efforts. The order has already provided $50,000 to fund food vouchers.

At the highest levels of the Catholic Church in Australia, Archbishop Mark Coleridge, the president of the Australian Catholic Bishops Conference, has described the bushfire crisis as “an unprecedented calamity,” observing that “there is no end in sight to the horror which confronts us with our powerlessness before the devastating force of nature.” He called for “urgent action to care for our common home in order to prevent such calamities in the future.”

The conference has taken the rare step of beginning a national response to manage church efforts across Australia, such is the scale of the emergency. The conference will facilitate national networks of volunteers and coordinate activities across its national network of relief and support agencies, including Vinnies, Caritas Australia, Catholic Religious Australia and Catholic Social Services Australia. The National Catholic Education Commission will provide fee relief to school families who have been affected by the disaster.

“With broad and deep roots across the nation, the church stands ready to walk alongside people throughout their journey of recovery,” Archbishop Coleridge said.

The Australian bishops’ conference has also extended its national prayer campaign for the alleviation of drought conditions that have contributed to the crisis, and Archbishop Coleridge has reiterated the need for prayer.

“With broad and deep roots across the nation, the church stands ready to walk alongside people throughout their journey of recovery,” Archbishop Coleridge said.

“Facing this exceptional crisis, we renew our call for insistent prayer for those stricken by drought and fire, for those who have lost their lives in the fires and their families, for rain to quench the parched land and extinguish the fires,” he said in a statement. “A genuinely Catholic response to a crisis of this magnitude must draw strength from prayer which inspires concrete and compassionate action.”

Archbishop Anthony Fisher, O.P., who leads the Archdiocese of Sydney, has asked Catholics to join him in “praying for our courageous firefighters, putting their own lives at risk to prevent further loss of life from bushfires in a number of Australian states.”

Archbishop Fisher has composed a Collect for the Mass for Rain: “O God, in whom we live and move and have our being, grant us sufficient rain so that, being supplied with what sustains us in this present life, we may seek more confidently what sustains us for eternity.”

The Rev. Tony Hill, a parish priest in the Diocese of Sandhurst, Victoria, has written “A Prayer in the Face of the Terror of Bushfires.”

“God our loving Father, we are subject to the whims and impulses of our natural world,” the prayer begins.

“Father, be with all victims who have lost their homes, their animals, their crops, their livelihood. Bless the many volunteers who support our firefighters with food and drink and all those who give to those left with nothing. We pray too for killed or injured wildlife; both native and domestic, and for trees and plant life that have been destroyed.

“Father, be with all victims who have lost their homes, their animals, their crops, their livelihood. Bless the many volunteers who support our firefighters with food and drink and all those who give to those left with nothing.”

“Send out your spirit and renew the face of our injured and wounded land and all her people.”

Once the immediate emergency subsides and the long recovery is underway, a period of national reflection will begin. Some Catholics have already started to discuss the root ecological and political causes of the crisis—experts say climate change has been a key contributing factor.

Catholic Earthcare Australia, the ecological advisory agency to the church in Australia, told America that it “laments the scorched earth upon which our unique fauna and flora have been extinguished by the millions.”

Speaking from Sydney, Catholic Earthcare director Bernard Holland said Australia is “a society where ‘the precautionary principle’—the basic tenet of caring for our common home, including human survival—has never been publicly discussed and certainly not implemented.” On the question of national responses to the broader ecological crisis, Mr. Holland said the agency “laments the failure of our society to come together, unified in our beliefs, underpinned by common values and nurtured through our different expressions of faith.”

He believes, however, that the Catholic Church can work in the community to address that failure. Mr. Holland says that his agency “is working to reform those within our schools, parishes and health sectors through ‘formation of the heart’ programs.”

A prayer during the Australian bushfires
Peter Bierer

Father Slater agreed that, instead of the bitter partisanship that is already miring discussions about the causes of the bushfires, Australian Catholics “could look more thoroughly at Pope Francis and the encyclical, ‘Laudato Si’.”

In the western region of the state of Victoria, the Rev. Justin Driscoll, a parish priest in the Diocese of Ballarat, said that the fires expose “our vulnerability and fragility in the face of the powerful forces of nature.”

“It may be providential for Catholics in Australia that we are preparing for a Plenary Council,” he said, “and the process of preparation is one of dialogue and discernment.” He said that it was a time to “scrutinize the signs of our times and interpret them in light of the Gospel.”

“As Catholics in Australia, these catastrophic conditions are one of the signs of our times. How are we to interpret them in light of the Gospel?”

“We all must listen to the cry of the earth and the cry of the poor so that we might value human dignity and the integrity of creation,” Father Driscoll said. “The ecological conversion that Pope Francis calls for [in ‘Laudato Si’] will require not just a greater awareness of climate change but of our very place in God’s creation.

“We must rethink our identity as co-creators...made in the image and likeness of God, stewards of the earth with responsibility to care for our common home.”

Show Comments ()
Join the conversation: Login or create an account
Before you can comment, you need to update your profile to include your first and last name, as required in our comments policy. Then reload this page and you'll be set up for commenting. Update your profile
Advertisement
More: Australia / Humanitarian Aid / Laudato Si' / Climate Change 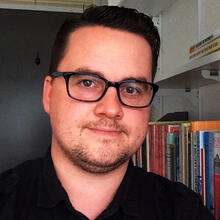 Ben Wilkie is a historian and freelance writer based in Victoria, Australia.