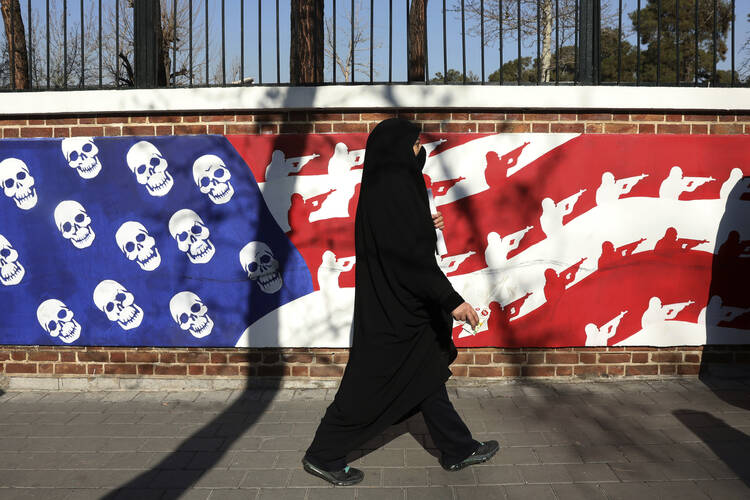 A mourner leaves a funeral ceremony for Iranian Gen. Qassim Soleimani and his comrades, passing graffiti on the wall of the former U.S. Embassy in Tehran, Iran, on Jan. 6. (AP Photo/Vahid Salemi)

On Jan. 3, President Trump ordered a U.S. drone attack to kill Iranian General Qassim Soleimani, who was then in Iraq. The drone strike also killed nine other Iranians and Iraqis at Baghdad’s airport. The president then made threats of further attacks against Iran, including tweets suggesting attacks on cultural sites that would be against international law, and ordered thousands of additional U.S. troops into the Middle East. On Jan. 8, President Trump announced new economic sanctions on Iran, signaling a move to de-escalate the military response, but the world remains in a state of high alert.

The Trump administration says General Soleimani was involved in planning attacks against U.S. forces in the Middle East and, therefore, the attack was justified as pre-emptive self-defense. The Iraqi government disagrees, saying the attacks violated the agreement that allows U.S. troops in their country to help train Iraqi troops and fight ISIS. Iraq’s Parliament has voted to expel U.S. troops from Iraq, but President Trump has threatened the Iraqi government with severe sanctions if U.S. troops are forced out.

The founding fathers did not imagine that presidents would use a limited grant of power to justify expansive and unilateral powers to commit U.S. military forces abroad.

Are the U.S. attacks legal? U.S. laws passed after the terrorist attacks of Sept. 11, 2001, do not authorize the use of force against Iran. And U.S. military law and international law specifically forbid attacks against cultural sites. Congress is considering bills to de-escalate the conflict, while Defense Secretary Mark Esper has clarified that the existing laws of war still apply and that cultural sites will not be military targets.

The Constitution gives Congress the power to declare war, as well as almost all other war powers, such as military funding, the exclusive authority over the armed forces and military bases, the power to investigate and oversee all governmental activity, etc. But in practice, war powers have been shared with the president, ever since Thomas Jefferson asked Congress for authorization to fight the Barbary pirates who were attacking U.S. ships off the coast of present-day Libya. With George Washington in mind, the Constitution established civilian control over the military by naming the president as commander-in-chief of military forces; that meant that once Congress authorized military action, a civilian would control the operation. The founding fathers did not imagine that presidents would use that limited grant of power to justify expansive and unilateral powers to commit U.S. military forces abroad. But historically, the powers of the president and executive branch have increased during wartime.

The pendulum swung so far toward presidential power during the Vietnam War that Congress acted to check the growth of an “imperial presidency” in which presidents engaged in “secret” wars.

The pendulum swung so far toward presidential power during the Vietnam War that Congress acted to check the growth of an “imperial presidency” in which presidents engaged in “secret” wars. These wars were never secret to those beneath U.S. bombs, but they were conducted without public or congressional scrutiny or authorization. To honor constitutional checks and balances, and ensure that the U.S. public and Congress (who pay for wars in blood and tax money) were part of decisions to use force, Congress passed the War Powers Act in 1973, over President Nixon’s veto.

This law requires presidents to consult with Congress before using force and to notify Congress of the specific threats the deployment addresses, the legislative authorization for the military intervention, and the expected scope and duration of the use of force. The law also requires presidents to get congressional authorization to use force and to withdraw U.S. forces if Congress does not provide authorization. Presidents of both political parties have complained about this law, and Congress has struggled to enforce the deployment time limits when the executive branch is not interested in executing this part of the law. Yet presidents have consistently abided by the law’s reporting requirements and have offered Congress and the public specific legal justifications for the use of force.

Prior to the Sept. 11, 2001, terrorist attacks, the United States consistently opposed the targeted killings of individuals. Because U.S. troops are forward deployed in 150 out of 193 countries, U.S. citizens are more endangered than anyone by policies that allow targeted killing. Republican President George W. Bush’s administration argued against targeted killings in the months prior to the 9/11 attacks, with the U.S. ambassador to Israel noting: “The United States government is very clearly on record as against targeted assassinations. They are extrajudicial killings and we do not support that.”

Consistent with the War Powers Act, after Al Qaeda’s attacks on Sept. 11, 2001, Congress authorized the president “to use all necessary and appropriate force against those nations, organizations, or persons he determines planned, authorized, committed, or aided the terrorist attacks that occurred on September 11, 2001, or harbored such organizations or persons, in order to prevent any future acts of international terrorism against the United States by such nations, organizations or persons.” This law authorized the U.S. invasion of Afghanistan and was used to justify targeted killings of non-state actors in drone strikes against Al Qaeda and related extremist Sunni Muslim terrorist groups, who often were supported by Saudi Arabian citizens and money.

Drone War Under Law
The Editors

A new nuclear arms race? How the U.S. withdrawing from a treaty with Russia increases the risk
Maryann Cusimano Love

In 2002, Congress passed the Authorization to Use Military Force against Iraq, which authorized U.S. military intervention to force Saddam Hussein’s compliance with United Nations Security Council resolutions, requiring U.N. inspections to verify that Iraq had destroyed its weapons of mass destruction programs after the 1991 U.S. invasion of Iraq.

These laws have served as the legal basis for U.S. drone attacks against Al Qaeda, the Taliban and extremist Sunni Muslim non-state actors and terror groups, and against the government of Saddam Hussein in Iraq. These laws have also been stretched to cover ISIS, for example, which did not exist at the time these laws were passed and was created as a result of the U.S. invasion of Iraq. But because ISIS was a splinter group of Al Qaeda, led by Saddam Hussein’s deposed leaders of Iraq’s Republican Guard, it was argued that the fight against ISIS could be seen as authorized by the 2001 and 2002 congressional authorizations. President Obama asked Congress to pass an additional authorization to cover U.S. interventions against ISIS in Syria, but Congress did not act.

Neither of these laws authorize the use of force against Iran. Iran was not responsible for the Sept. 11, 2001, terrorist attacks. And despite U.S.-Iranian conflicts, Iran and Shiite militias have been fighting ISIS and other extremist Sunni Muslim groups in Iraq and Syria; anti-ISIS coalition operations have now been halted in the aftermath of the Soleimani attack.

President Trump is obligated by law to officially report to Congress specifics concerning U.S. military actions against Iran. He argues that his tweets about Iran satisfy official reporting requirements; many members of Congress do not agree. Bills have been introduced in both the House and Senate to de-escalate U.S. military actions against Iran. President Trump argues that he can act without congressional authorization. But the lessons of Vietnam show that the president ought not to wage war without congressional authorization and public support.

Maryann Cusimano Love is a professor of international relations at the Catholic University of America in Washington, D.C., and a contributing editor to America.