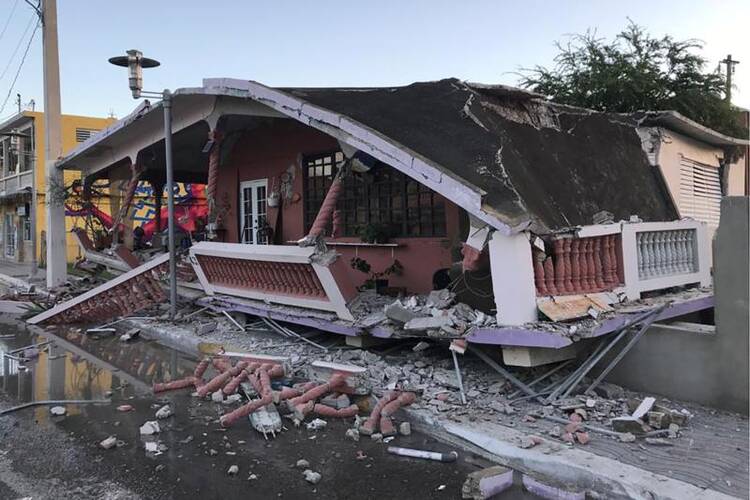 A destroyed home is seen after an earthquake in Guanica, Puerto Rico, Jan. 6, 2020. A larger temblor of magnitude 6.4 rattled Puerto Rico before dawn Jan. 7, killing at least one person and destroying a Catholic church. (CNS photo/Ricardo Ortiz, Reuters)

WASHINGTON (CNS) -- At least one person has died and one Catholic Church was destroyed by the latest of a series of earthquakes to rock Puerto Rico.

Aftershocks ranging in magnitude from 3.8 to 6 were felt throughout the island following the early morning temblor, reported the U.S. Geological Survey.

The continuous shaking has taken a psychological toll, said Father Enrique Camacho, executive director of Caritas of Puerto Rico, which is affiliated with Catholic Charities USA.

"Right now we are helping the people with emotional support," Father Camacho told Catholic News Service Jan. 7. "What we fear is that we continue having these earthquakes. If we have bigger ones, the damage is going to be very, very, very bad."

The latest earthquake sent people scurrying from their homes into the streets from Ponce, the island's second-largest city, westward along the island's southern coast to the towns of Guayanilla, Guanica, Yauco and Lajas, all near the epicenter of the quakes.

Father Camacho said the church had survived the island's major earthquake of 1918, only to be shaken apart by the Jan. 7 temblor. "The only church that remained on the street (in 1918) was that," he said. "Then 100 years later, with this earthquake, it is the one that fell down.

I attended the Puerto Rico protests. We are not done yet.
Rolando André López Torres

"That's really sad because it was a very historical monument, a tourist place," he added.

Father Camacho said he had been in contact with Bishop Ruben Gonzalez Medina of Ponce, where the cathedral experienced some damage. Mass was canceled Jan. 7 at the cathedral and numerous parishes across the diocese, he said.

"I talked with a priest in charge of social ministry in Ponce," Father Camacho told CNS. "He told me even himself he is not traveling to see what is happening (in the diocese) because they are afraid there could be more ruts in the road and their lives are in danger.

Puerto Rico has experienced a series of minor earthquakes beginning the night of Dec. 28-29 leading to the major shakers, reported the U.S. Geological Survey.

The most recent large quake knocked out power to much of the island, including the capital of San Juan. The Puerto Rico Electric Power Authority reported that all of its power plants went offline after its "auto protection" systems were activated.

The company reported damaged to one of its main power plants near the earthquake's epicenter, but that technicians were working to restore electricity to other parts of the island.

Archbishop Robert Gonzalez Nieves of San Juan tweeted soon after the quake Jan. 7: "A 6.7-point earthquake has just shaken all of Puerto Rico that is now without light. Prayer, serenity, solidarity and charity are important. We are one family!"

Father Camacho said if more powerful earthquakes occur, he feared damage in the rural mountainous center of the island, where housing is less sturdy, would be severe.

As for an immediate response, Caritas of Puerto Rico is in a holding pattern.

"We are waiting to see what are the damages," the priest said. "We are willing to help people reconstruct as soon as possible."