I attended the Puerto Rico protests. We are not done yet. 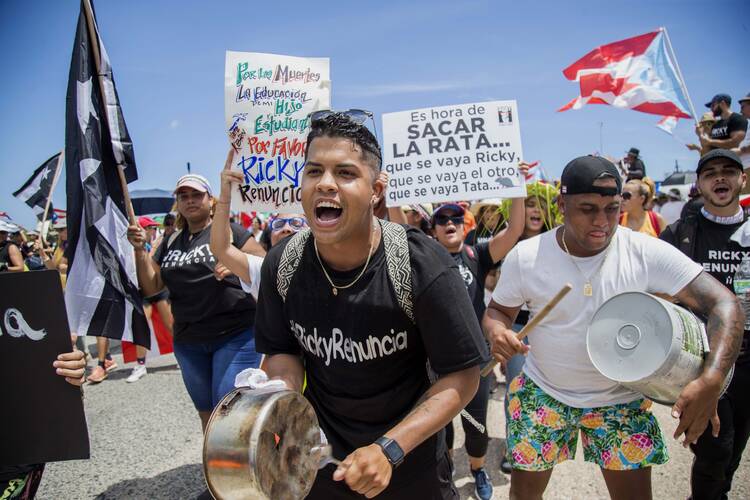 It was 10 p.m. on Tuesday in el Viejo San Juan (the oldest section of the Puerto Rican capital). Taking over La Fortaleza Street, hundreds of us had gathered to face the row of policemen and policewomen who guarded the gates to the governor’s mansion. We were there to read them the Puerto Rican Bill of Rights, part of the Constitution ratified in 1952 through a public referendum. At the head of the crowd, with a megaphone in one hand and a copy of the document in the other, Nicole Curet Alvarado, a local activist, read Section 4 of the Constitution. She began, “No law shall be made abridging the freedom of speech...”

We roared more with each spoken word, hoisting up our flags and arms, clapping our hands if we had no drum to beat them on.

At this, the crowd roared. Hands beat on drums and pleneras, sticks beat on cowbells, spoons clanged on pots and pans, and whistles blew. Mirroring the people’s joy, Ms. Curet Alvarado smiled as she finished reading: “...or of the press, or the right of the people peaceably to assemble and to petition the government for a redress of grievances.”We roared more with each spoken word, hoisting up our flags and arms, clapping our hands if we had no drum to beat them on. This was a Boricua protest (to use another name for Puerto Ricans, after Borikén, the indigenous name for the island), a festive manifestation of our collective will.

But why were we reading the Constitution?

The day before, at 9 o’clock Monday morning, over 500,000 of us had occupied El Expreso Las Américas, one of the main highways in San Juan, not just to call for the resignation of our (then) governor Ricardo Rosselló but to show indignation over our corrupt government. By 5 p.m., the highway was back in use and the action had moved to La Fortaleza Street, which remains the focus of the protests. At 10:50 p.m., a policeman’s voice, through a megaphone, disrupted the flow of our chant on La Fortaleza Street: “You have 10 minutes to leave the premises,”he said.

What had begun as a joyous demonstration became a scene of fear and fire, screams and tears.

The crowd roared back: “¡Somos más, y no tenemos miedo!” (“There are more of us, and we are unafraid!”)

But 10 minutes later, the man’s voice returned, and this time a booming helicopter joined in on the intimidation. “This has become an illegal manifestación,”he said beforea bomb of tear gas popped onto the crowd and smoke overtook the street. Women, men and young people ran away in panic. What had begun as a joyous demonstration became a scene of fear and fire, screams and tears.

What had we done wrong? Nothing. And so the next night, we gathered there again to tell the police what they had done wrong. Once we finished reading the Constitution, the leaders of the protest passed around children’s books to “put the Constitution to sleep.” As we read nursery rhymes from a book about the Three Kings (even at our most secular, Puerto Ricans can’t avoid our cultural Catholicism), the clock struck 11, sans interruptions from the police, and the manifestación continued. It continues to this day, for we are not done yet.

An explanation: In English, we speak of protests. While the Hispanic world does use the word protesta, we more commonly use manifestación. Whichever word you use, theology is still there, a persistent ghost in the background.

Protesta harkens back to the socio-religious transformation wrought by the Protestant Reformers. To me, manifestación connects more to St. John of the Cross than to Martin Luther, for it is often used in the context of mysticism to speak of the disclosing of what was hidden. And what is this if not revelation? What is manifestation if not grace?

Just as the Carmelite friar went through his dark night of the soul only to find the light of the infinite at its end, so have we undergone the dark night of multiple natural catastrophes, including Hurricane Maria, and decades upon decades of unmitigated corruption to show the world that we, too, have a hurricane stationed in our chests, as Ana Teresa Toro, one of our foremost writers, beautifully expressed. But our hurricane does not kill. Instead it unleashes a feast of what we most hold dear: our values, our music and yes, our children.

Is reform possible in Puerto Rico after street protests drive governor out of office?
Kevin Clarke

If you let yourself feel the flow of a Puerto Rican manifestación, something amazing happens: As the waves of sound hit you, you realize the rhythm is endless. At Las Américas Expressway, I remember the distinct moment when it hit me. Everyone, absolutely everyone, was clapping to a beat, as different groupings of musicians formed organically amid people, creating the currents that made up that universal river of sound. In the same way that a tropical rainforest naturally hums with the rhythms of nature, with frog chirps and bird calls and river songs expressing the collective sound of a natural orchestra, so did we create a natural, musical ecology.

Much is being said about what outsiders can learn from us, given our success not just at getting the governor to resign but at uniting people across political divides and serving as inspiration for other movements across the world. I believe the heart of the Puerto Rican secret is to be found in our ability to create these organic landscapes of rhythm and raging joy. It is the fruit of a long, tragic and glorious history that yet unfolds toward its greatest day. 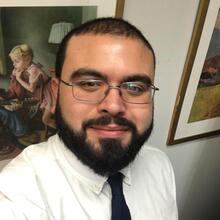 Rolando André López Torres is a writer based in Boston and San Juan, Puerto Rico. He is also a bookseller at Trident Booksellers in Boston. Instagram, @nocolornocontrast.

What Puerto Ricans need to do now is get to work.