Christianity Today editor says Trump should be removed from office

Christianity Today editor says Trump should be removed from office 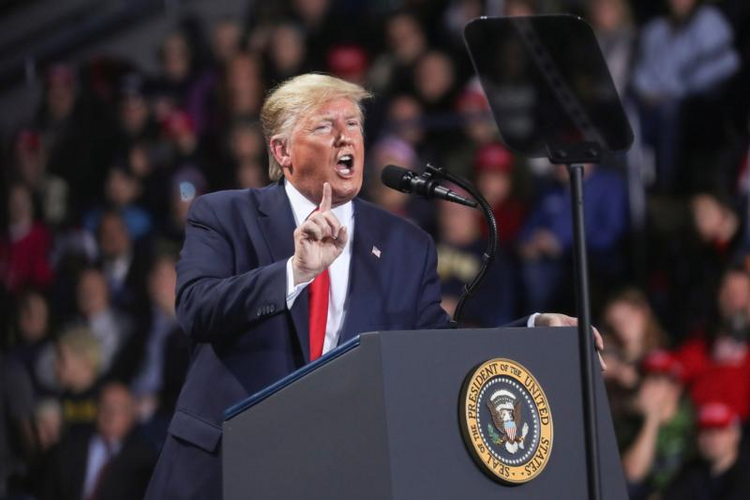 (RNS) — Mark Galli, the editor-in-chief of the influential evangelical magazine Christianity Today, says that President Donald Trump should be removed from office.

In an editorial on Trump's impeachment published Thursday (Dec. 19), Galli argued that even though Democrats have "had it out" for Trump since his election, the case for the president's impeachment — which the House of Representatives voted to approve to Wednesday — was convincing.

Trump, he said, was morally unable to lead.

"The facts in this instance are unambiguous: The president of the United States attempted to use his political power to coerce a foreign leader to harass and discredit one of the president's political opponents," he wrote. "That is not only a violation of the Constitution; more importantly, it is profoundly immoral."

He noted that Christianity Today also spoke out when Richard Nixon and Bill Clinton were facing impeachment. And Galli made it clear that he believes Trump lacks the morality to lead the country.

"The reason many are not shocked about this is that this president has dumbed down the idea of morality in his administration. He has hired and fired a number of people who are now convicted criminals," he wrote. "He himself has admitted to immoral actions in business and his relationship with women, about which he remains proud. His Twitter feed alone — with its habitual string of mischaracterizations, lies, and slanders — is a near perfect example of a human being who is morally lost and confused."

In an interview with Religion News Service on Thursday, Galli explained that he decided to publish the piece in part because of the magazine's history of speaking out during previous impeachment cases and in part because of Trump's actions.

"It's just an unambiguous moment in which it is absolutely clear that there's just no question what (Trump) was trying to do," he said.

"I've been rolling this around in my mind for a week or two," he said. "This morning I just walked in the office and asked a colleague, 'Should we write an editorial about this?' And we said, 'yeah.' I had the editorial written in an hour."

Galli, who will retire in January, said the topic of Trump's behavior was one he has thought about "for months, if not years."

"It wasn't like I had to do a bunch of research to find out what he does on Twitter," he said.

In his editorial, Galli said that Trump's removal may have to wait till the 2020 election. But either by impeachment or election, Galli said, Trump should leave office.

Galli said he doesn't expect his editorial to change many minds and doesn't believe many hard-line evangelical Trump supporters subscribe to his magazine. He added that he doesn't belong to either major political party, and voted third party in the last election.

"People are going to think of it as if it's partisan," he said. "I'm not joining the Democratic Party to take Trump down."

White evangelical Christians in particular still support Trump in large numbers. But asked if his editorial speaks to a minority of evangelicals who are unsettled by Trump's presidency but unwilling to speak out, Galli said yes.

He said he understands why they haven't been more vocal, however.

"I understand why they've been more quiet, because there are people I love and have relationships with who are deeply committed to supporting Donald Trump because of his views on abortion and religious freedom," he said. "So naturally they're hesitant to speak out too loudly or with too much condemnation, which will offend, hurt and maybe alienate people that are lifelong friends, people they deeply love."

Christianity Today was founded in 1956 by famed evangelist Billy Graham. His son Franklin Graham has been a stalwart supporter of Trump and a critic of the impeachment process, saying in a November Facebook post that it "makes me sick to my stomach."

The younger Graham told The New York Times that Christianity Today was part of a "liberal element" among evangelicals.

"My father would be embarrassed," he told the Times in response to Galli's editorial.

While Franklin Graham has been reluctant to criticize Trump's actions, his father took a different tack during the Watergate controversy. Despite his friendship with Nixon, Billy Graham told Christianity Today in early 1974 that he condemned the Watergate break-in and said it had "hurt America."

He also said that Nixon — like anyone — would be better off if he admitted his mistakes.

"It's better to show humility and it's better to say 'I'm wrong' or 'I'm sorry' when you've made a mistake," he said. "The Bible says, 'Thou shalt not bear false witness.' That commandment has never been rescinded, and lying is wrong no matter who does it."

RNS spoke with Galli earlier this week when the magazine had yet to comment on impeachment proceedings.

Show Comments ()
Comments are automatically closed two weeks after an article's initial publication. See our comments policy for more.
Provide feedback on this article
Join the conversation: Login or create an account
Before you can comment, you need to update your profile to include your first and last name, as required in our comments policy. Then reload this page and you'll be set up for commenting. Update your profile
Advertisement
More: Donald Trump / US Politics