The Afghanistan Papers make clear that America has a repentance problem 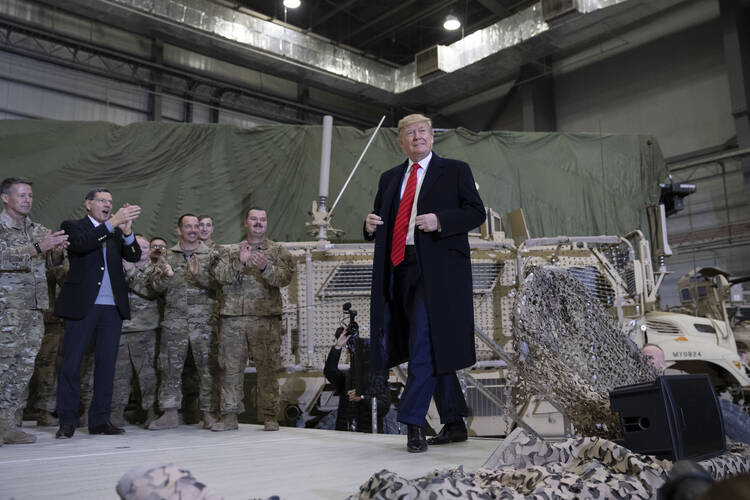 President Donald Trump at Bagram Air Field, Afghanistan, on Nov. 28, during a Thanksgiving Day visit. U.S. and international forces have been on the ground here ever since the terrorist attacks of Sept. 11, 2001. (AP Photo/Alex Brandon)

We have been here before. In 1964 there was the Gulf of Tonkin resolution, and in 1971 came the publication of the Pentagon Papers. In 1979, David Halberstam laid the blame for the Vietnam War at the feet of “the best and the brightest.” Not until four decades later in 2004, in the film “The Fog of War,” did Robert McNamara, the secretary of defense under Presidents Kennedy and Johnson, own his culpability in that conflict.

In 2003, Vice President Dick Cheney and the hawkish neo-cons of the Bush administration led the United States to war under false pretenses once again, this time in Iraq. In 2006, the Iraq Study Group, headed by James A. Baker and Lee Hamilton, issued a report listing 79 recommendations to correct and prevent the mistakes and abuses of that war.

“Year after year, U.S. officials failed to tell the public the truth about the war in Afghanistan.”

The same year, the journalists Seymour Hersh and Mark Danner began extended coverage of the torture committed at Abu Ghraib. We later learned that the C.I.A. had filmed the “enhanced interrogations,” destroyed the tapes so they could not be turned over to investigators and continued applying these grossly immoral techniques even after they had proven ineffective at producing actionable intelligence. The new film “The Report” dramatizes an investigation into the torture program by the Senate Intelligence Committee, led by Senator Dianne Feinstein, a Democrat from California.

Now comes The Washington Post’s release, on Dec. 9, of the so-called Afghanistan Papers—more than 2,000 pages from the Lessons Learned Program at the office of the Special Inspector General for Afghanistan Reconstruction, along with other documents. They reveal that, as The Post summarizes, “Year after year, U.S. officials failed to tell the public the truth about the war in Afghanistan.” Once again there was failure at the top, by both civilian and military leaders, in the Bush and Obama administrations and right up to the present.

“The interviews make clear,” the Post reporters write, “that officials issued rosy pronouncements they knew to be false and hid unmistakable evidence the war had become unwinnable.” They go on to say, “Several of those interviewed described explicit efforts by the U.S. government to deliberately mislead the public and a culture of willful ignorance, where bad news and critiques were unwelcome.” Americans, it appears, have not learned the lessons of our own past failures. Rather, we seem ensnared in a tragedy of biblical dimensions from which we cannot flee.

We seem to lack the sense of shame and responsibility required to take to heart the lessons of the Afghanistan Papers.

The first lesson I draw from the Afghanistan Papers is that U.S. civic culture has lost the capacity for repentance. Our ancestors once possessed it. Both John Adams and Abraham Lincoln, in proclaiming national days of thanksgiving, called for repentance as well as gratitude. But the secular United States, and also a number of religious nationalists, would appear to be devoid of the sense of shame and responsibility required to take to heart the lessons of the Afghanistan Papers.

Today the United States suffers from a fundamental loss of reverence, the fault Plato believed was at the root of every political and civilizational decline. I fear we lack the dispositions necessary to take to heart the prudential lessons of history: a sense of humility, an awareness of human fallibility, a deep-felt respect for others and for creation and a conviction that under God we are all bound to one another.

Deprived of the nurture of the deeply felt restraints and high aspirations that move human beings, a set of purely pragmatic rules will never flourish. They will simply fall on the trash heap of discarded Lessons Learned.

Another lesson I take from the absence of political wisdom revealed by the Afghanistan Papers: Beware a shallow Niebuhrianism that uncritically legitimates the use of force. Reinhold Niebuhr, the best-known public theologian in the mid-20th century, was the founder of Christian Realism, the political theology that affirms the exercise of force is necessary to keep order in a sinful world.

Christian Realism is the favorite theology of politicians and policymakers. Its most conspicuous and articulate use in recent years was President Obama’s 2009 Nobel Peace Prize lecture, where the young president argued for the necessity of the use of force to restore peace and establish imperfect justice in a dangerous world.

But Niebuhr’s would-be imitators lack the master’s own searching sense of irony. They need to purify their uncritical views with a bracing reading of Niebuhr’s The Irony of American History, a book that military historian and theorist Andrew Bacevich cites as a must-read for policymakers and military professionals.

The last lesson I take from the Afghanistan Papers is that, as unlikely as it may seem in this time of public fakery, truth-telling must become the rule in politics. Politicians and military professionals must learn how to lead with the truth to persuade the public of the rightness of the policies they promote.

More important, perhaps, they must be willing to accept electoral defeat, the loss of professional advancement or setbacks on policy matters from sharing bad news with the public. Without the truth, we should have learned by now, the Republic the founders gave us will be hollowed out from within. Alas, dishonesty, duplicity and spin are already eating away day by day at the underpinnings of a government of free people.