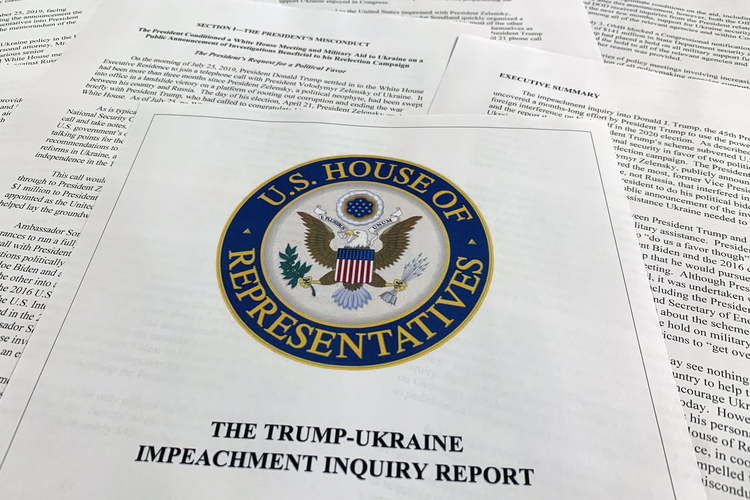 The House released a sweeping impeachment report outlining evidence of what it calls Trump’s wrongdoing toward Ukraine. The findings will serve as the foundation for debate over whether the 45th president should be removed from office. (AP Photo/Jon Elswick)

Philip Allen Lacovara, who once served as counsel to the Watergate special prosecutor—back in more innocent days, when that political scandal had appeared to be the nation’s worst—has become something of an impeachment expert. Not exactly a hobby, not really a consultancy opportunity, but definitely a sideline that can produce its share of teeth-gnashing and hair-pulling.

Some of that exasperation was revisited last month when Mr. Lacovara found himself glued to the television coverage of the House Intelligence Committee’s investigation of the Trump administration’s peculiar affairs in Ukraine. As former and current Foreign Service staff described their struggle to comprehend President Trump’s policy, as well as their efforts to manage his wayward political emissary, Rudy Giuliani, Mr. Lacovara found himself jumping between CNN and Fox News for gavel-to-gavel reporting.

Mr. Lacovara, a member of the board of directors of America Media, currently serves as legal adviser to the Sovereign Military Order of Malta’s Permanent Observer Mission to the United Nations in New York. In addition to his government service as a Watergate counsel, he has been a U.S. deputy solicitor general and special counsel to the New York City police commissioner.

“What Watergate involved pales in comparison to what the investigations of President Trump’s conduct have revealed.”

At an event sponsored by America Media and Fordham University, “U.S. v. Nixon at 45: An Evening With Philip Allen Lacovara, Esq.,” he will be discussing Watergate, Mr. Trump’s Ukrainian intrigues and more at America Media’s office—1212 Avenue of the Americas—on Dec. 4. The event is free and open to the public; R.S.V.P. to events@americamedia.org.

“People have asked me: ‘How does this compare with Watergate?’” he said, “and I have been quite explicit in stating that what Watergate involved pales in comparison to what the investigations of President Trump’s conduct have revealed.” The Watergate scandal and the impeachment investigation it produced resulted from an effort to conceal “a clumsy domestic burglary,” he explained.

“Here we’re talking about the national security of the United States and efforts to resist aggression by America’s principal foreign adversary, Russia. We’re talking about aid that was going to be necessary to save the lives of Ukrainians who were on the frontline, fighting Russian invaders and Russian-backed separatists. So the underlying events here are far more grave than they were in Watergate.”

And in Watergate, Mr. Lacovara said, President Nixon, who resigned rather than face trial in the Senate, was involved, at least initially, in the cover-up of other people’s actions. In this instance it is Mr. Trump’s own “egregious” acts that are the focus of the House investigations.

“There’s really no doubt that in an actual legal proceeding in a courtroom where people were on oath to do their duty there would be a determination that the central charge regarding the Ukraine affair is substantiated.”

The president himself, he argued, delivered the smoking gun in this scandal in the form of the summary of the transcript of the now-infamous conversation with Ukraine President Volodymyr Zelensky on July 25. That document, he said, contains “all of the elements that one would need to show the president’s direct involvement in orchestrating and creating the scheme to condition important American public action on the willingness of the Ukrainian authorities to announce an investigation into the president’s likely political opponent.”

“There’s really no doubt,” he said, “that in an actual legal proceeding in a courtroom where people were on oath to do their duty, to find facts, there would be a determination that the central charge regarding the Ukraine affair is substantiated.”

But facts, he suggested, will probably not have the final say in this impeachment process. In the current environment, Mr. Lacovara suspects that even with all the evidence on their side should House Democrats approve an impeachment, the Republican-controlled Senate would likely not vote to convict and remove Mr. Trump from office.

The House Intelligence Committee indeed concluded on Dec. 3 that Mr. Trump used “the powers of his office to solicit foreign interference on his behalf in the 2020 election” and, during the course of its investigation, “obstructed Congress by stonewalling the proceedings.”

According to the report: “The President engaged in this course of conduct for the benefit of his own presidential reelection, to harm the election prospects of a political rival, and to influence our nation’s upcoming presidential election to his advantage.” In doing so, “the President placed his own personal and political interests above the national interests of the United States, sought to undermine the integrity of the U.S. presidential election process, and endangered U.S. national security.” The House intelligence panel is scheduled to vote later tonight, in what is expected to be a party-line tally, to send the document to the House Judiciary Committee ahead of a landmark impeachment hearing on Dec. 4.

Despite his disappointment at the hyper-partisanship evident during the House hearings, Mr. Lacovara said the witnesses still “made me proud to be an American.”

“It is distressing to me as somebody who had been a lifelong Republican,” Mr. Lacovara said, “that unlike in Watergate, where a fair number of Republicans eventually voted to impeach President Nixon even before the White House tapes were released, there’s not a single Republican in the House who seems willing to recognize the undeniable facts and to attribute to them the significance that they have under our constitutional system.”

Four other committees will conduct their own reviews, and their reports in turn will be passed on to the House Judiciary Committee, which will issue a final recommendation to the Senate.

Despite monolithic Republican resistance, Democrats still have the majority in the House, and Mr. Lacovara is confident that the president “will be impeached.” At the moment it seems likely that in a Senate trial, Republicans will prevent the president’s removal from office. But Mr. Lacovara was personally not willing to make an ironclad prediction “because we don't know what more is going to come out when the matter reaches the Judiciary Committee.”

As the various committees proceed with televised hearings, “it is not impossible to believe that public interest in what actually comes out will be energized in a way that it hasn’t been so far.”

“And more specifically that by the time this reaches the Senate for a trial,” he added, “some Republicans, whether it’s Susan Collins or Lisa Murkowski or Mitt Romney or some others, may conclude there is just too much on one or another of the articles of impeachment for them to blind themselves to its significance.” As long as a few Republicans “begin to defect, if there’s a sense that the president is vulnerable or that Republicans will not be punished crucially at the polls if they go against Trump, then you might have a logjam breaking.”

Despite his disappointment at the hyper-partisanship evident during the House hearings, Mr. Lacovara said the witnesses still “made me proud to be an American.”

“The political system is in dire need of repair because partisanship seems to have eclipsed any notion of constitutional or moral responsibility—and I think that’s a crucial difference between this situation and Watergate.”

“In the midst of all of the scandalous attacks on the so-called Deep State and attempts to energize hostility to the ‘faceless bureaucrats’ in Washington [and promote] skepticism about the government,” he said, “you saw a whole parade of dedicated, honest, honorable Foreign Service officers and civil servants who were simply there to tell the truth.”

He was especially impressed by the unflappable intelligence analyst Fiona Hill. “She was willing to acknowledge facts that the Republicans wanted to try to bring out…that Ukrainian authorities or some officials in the Ukraine government had assumed that Hillary Clinton was going to win, and they made some gestures that turned out in her view to have been ill-advised,” he said.

“But the basic thrust of her testimony was to declare explicitly that what she understood was that the ‘three amigos’ [Gordon Sondland, ambassador to the European Union; Kurt Volker, Ukraine envoy; and Energy Secretary Rick Perry], led by Rudy Giuliani, were conducting not a Ukraine policy [in] the national security interests of the United States, but on what she called a political errand for the president—to try to dig up dirt on his potential presidential rival for the 2020 election.”

Explainer: What is impeachment and why is it an option?
Nicholas D. Sawicki

He also appreciated her forthright torpedoing of tales that Ukrainian figures had some hand in Russia’s digital burglaries of Democratic National Committee servers during the 2016 election as an alternative reality produced “right out of a skunk work in Moscow.”

“I think there are two takeaways on this,” he said, speaking of November’s lengthy hearings. “One is that the political system is in dire need of repair because partisanship seems to have eclipsed any notion of constitutional or moral responsibility—and I think that’s a crucial difference between this situation and Watergate.

“The other part of it is the one that gives me some more hope,” he said. “When you listen to the testimony of the career professionals who have dedicated their lives to public service, I think you have a basis to be somewhat more optimistic because even though at the top levels of government there are people who are up to no good, whose interests are either careless or malicious, there are hundreds of thousands of people who have dedicated themselves to public service who are trying to keep the ship of state upright and moving in a responsible direction.”

After Mr. Trump’s surprise victory in 2016, he recalled telling associates that there were “some strong institutions in America that…should protect us from the worst abuses of presidential power President Trump might be otherwise inclined to engage in: the press, the Congress, the courts, and the permanent Civil Service and Foreign Service.”

The sturdiness of those latter institutions was apparent during the House investigation in November, he said, a testimony to “the best of the American political establishment—that is, the government officials who work day in and day out to keep the country strong, safe and sound.”

Show Comments ()
Comments are automatically closed two weeks after an article's initial publication. See our comments policy for more.
Show Comments ()
Join the conversation: Login or create an account
Before you can comment, you need to update your profile to include your first and last name, as required in our comments policy. Then reload this page and you'll be set up for commenting. Update your profile
Advertisement
More: US Politics / Donald Trump / Europe