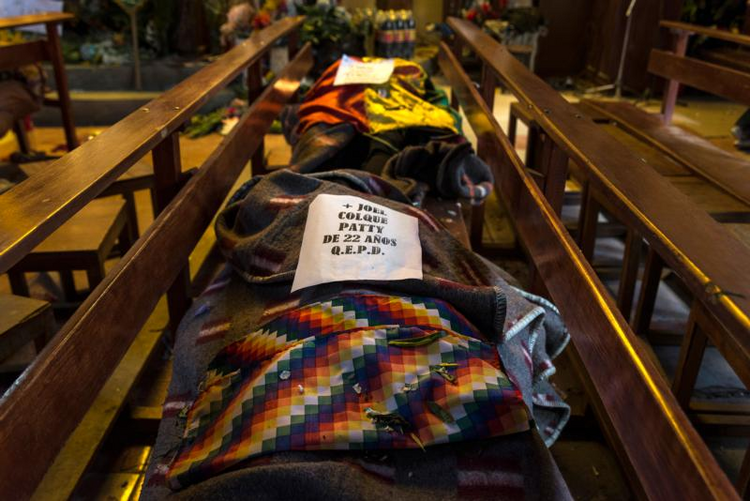 Two bodies lie covered on a bench in St. Francis Church in El Alto, Bolivia, Nov. 20, 2019, after protesters started to bring corpses into the church. The people were killed in clashes between Bolivia's military and supporters of former President Evo Morales. (CNS photo/Marcelo Perez del Carpio)

(CNS) A church located on the outskirts of Bolivia's capital city became an improvised morgue Nov. 20, following another deadly day of protests in the South American country.

Protesters said they brought the corpses to the brick and mortar church in an effort to stop government officials and the military from getting ahold of the bodies and "hiding the truth" about what happened to those killed.

By early Nov. 20, seven bodies had been brought to the church by protesters and were laid down on its pews, where they were covered with flags and blankets. The demonstrators then had Bolivian forensic scientists conduct autopsies on site.

"We don't trust the government," said Sandro Tenorio, an indigenous resident of El Alto whose 23-year-old brother was killed in the protest. Tenorio said his brother, Juan Jose, was shot dead as he tried to rescue people who were injured during the clashes.

"We gathered the bodies and brought them here, to stop soldiers from dragging them into their base," Tenorio said. "We want a transparent investigation."

Wilmer Barran, a doctor who has been assisting protesters, said he reviewed the corpses and found some with bullet injuries in their skulls and others pierced by bullets in the abdomen.

"The military is using live ammunition," Barran said after seeing the bodies, adding that another 20 people were seriously injured.

Eight people were killed Nov. 19 as Bolivia's military and supporters of Morales clashed outside a gasoline depot, according to the nation's human right ombudsman.

The protesters were keeping gasoline trucks from distributing fuel to El Alto and the nearby capital city of La Paz as part of a campaign to starve both cities of fuel and force the resignation of Interim President Jeanine Anez. But the military managed to break up the road block and send fuel trucks to La Paz.

Bolivia's defense minister said soldiers did not fire "a single bullet" against protesters, He said the country was facing threats from "terrorist groups" that tried to use dynamite to break into the gasoline plant.

Political turmoil broke out in Bolivia Oct. 20 after Morales was elected to a fourth consecutive term, in an election his opponents claim was rigged. Morales resigned Nov. 10 following weeks of riots and protests as well as a police mutiny; he was replaced by Anez, a conservative opposition senator. After being named Bolivia's interim leader, Anez walked into the presidential palace holding a copy of the Bible and said God had finally "returned" to the building.

Morales, Bolivia's first indigenous president, said he was deposed in a "right-wing coup," and his supporters have held large protests to have him reinstated. The Bolivian bishops' conference has facilitated preliminary talks between both sides and has said a new election in which all parties can participate is the best way to settle differences.

On Nov. 20, Bolivia's Senate passed a draft law for holding new elections, with the support of Morales' party, which holds a two-thirds majority. The bill now needs to be approved by the House of Representatives. Anez also presented an election law that will be debated in congress.

Thirty-two people have died in postelection violence in Bolivia, according to the national human rights agency. Morales supporters have recently constructed dozens of road blocks that have made fuel and food scarce in some cities, doubling the price of items like chicken, eggs and vegetables.

Father Revelin said the situation in his parish, near the gas depot, is "very tense," with streets that remain empty most of the day and have been blocked by local residents with burning tires and barbed wire.

He called on both sides to tone down their discourse in order to facilitate talks. He also had tough words for Bolivia's interim government.

"They took the Bible into the presidential palace, but they also need to defend Christian principles ... like not killing people," he said.

"It's not enough to place a Bible there, you have to practice what it says."

Show Comments ()
Comments are automatically closed two weeks after an article's initial publication. See our comments policy for more.
Provide feedback on this article
Join the conversation: Login or create an account
Before you can comment, you need to update your profile to include your first and last name, as required in our comments policy. Then reload this page and you'll be set up for commenting. Update your profile
Advertisement
More: Latin America