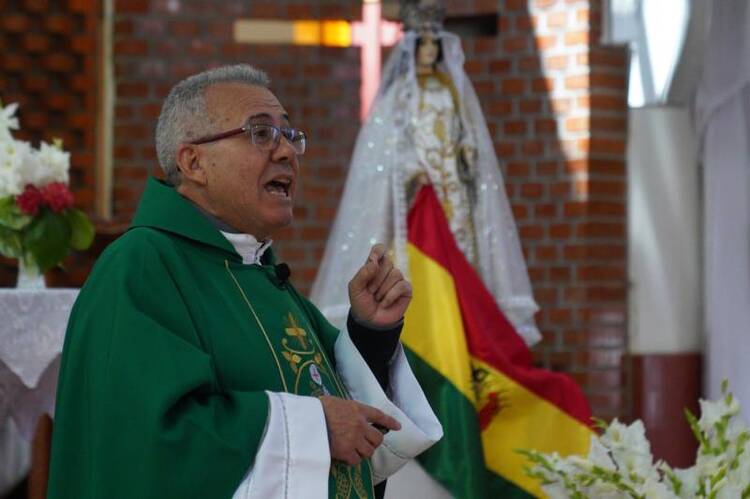 Father Jose Fuentes celebrates Mass at Jesus the Worker Church in El Alto, Bolivia, Nov. 17, 2019. Father Fuentes is part of a committee that is trying to facilitate talks between supporters of former President Evo Morales and allies of the country's new government. (CNS photo/Manuel Rueda)

Father Jose Fuentes, adjunct secretary of the Bolivian bishops' conference, said church leaders -- along with the European Union and the Embassy of Spain -- are trying to calm tensions by facilitating meetings between allies of the new government and recently ousted President Evo Morales' party, the Movement Toward Socialism.

The aim of the talks, Father Fuentes said, was for both sides to hash out the conditions under which a new election can be held and give Morales' party guarantees that they will be treated fairly. But so far only "basic issues have been discussed" such as creating security measures for Morales allies, and finding safe passage out of the country for those who have sought asylum abroad.

"We believe that the best way to resolve our differences is to hold a new election," Father Fuentes said, before celebrating Mass at the Jesus the Worker Parish in El Alto, just west of La Paz. "A lot of old wounds are surfacing in this crisis, and some leaders are now reigniting those wounds to mobilize people."

Father Fuentes said that in Bolivia's deeply polarized political climate, the church is one of the few institutions that both sides can trust, so it has to take upon the role of promoting dialogue. Morales, who is now in exile in Mexico, has had a difficult relationship with the country's bishops, who opposed his economic policies in the Amazon region.

"We have a lack of institutions that are accepted by all sides at this moment because, sadly, courts and organizations like the human rights ombudsman were co-opted by the ruling party," Father Fuentes said. "As the church, we don't have the power to make any decisions" on how the political crisis is solved, he explained. "But at least we can facilitate some talks."

Morales resigned Nov. 10 after facing three weeks of intense protests over his reelection to a fourth consecutive term. At least 20 people were killed within a week as Morales supporters clashed with security forces loyal to the caretaker government of Jeanine Anez.

The protesters blocked some of the country's main highways and cut supplies of fuel and food to the capital city, La Paz, a move that could lead to further confrontation with the military and police.

Some of the protesters fear they will lose social benefits, such as subsidies for the elderly and for pregnant women, gained while Morales was president. Morales cut poverty rates in half during his tenure and gave greater representation to rural and indigenous peoples in the nation's politics. But he also alienated some social groups, including indigenous people in Bolivia's lowlands and in the Amazon region, as he pushed ahead with development projects that had high environmental costs.

The ongoing crisis has also hit close to home for Father Fuentes, whose parish is located in the largely indigenous city of El Alto.

Following Morales' resignation, some of the former president's supporters rioted in the city, looting supermarkets and even burning a police station. Hundreds of local residents who were not involved in the protest kept night-watches to protect their properties, building barricades to protect themselves from potential looting, and burning fires on roads and sidewalks to keep warm.

The members of the Jesus the Worker Parish had to do the same.

"It's been very tense here," said Deacon Ronald Lopez. "We were even hearing rumors on WhatsApp that our school was going to be looted."

Fortunately, that did not happen. But the path leading into the church is still covered by ashes from the fires set up by parishioners to keep warm during the worst days of rioting.

In his sermons, Father Fuentes urged his flock to keep away from extremist groups that are trying to stoke racial and social tensions to further their interests.

"In life, it is very important for us to decide who we will serve," Father Fuentes said at Mass Nov. 17. "We can decide to serve God, but we can also make mistakes. Sometimes we can end up putting ourselves at the service of injustice, lies and arrogance."

Manuel Rueda
Provide feedback on this article
Join the conversation: Login or create an account
Before you can comment, you need to update your profile to include your first and last name, as required in our comments policy. Then reload this page and you'll be set up for commenting. Update your profile
Show Comments ()
Comments are automatically closed two weeks after an article's initial publication. See our comments policy for more.