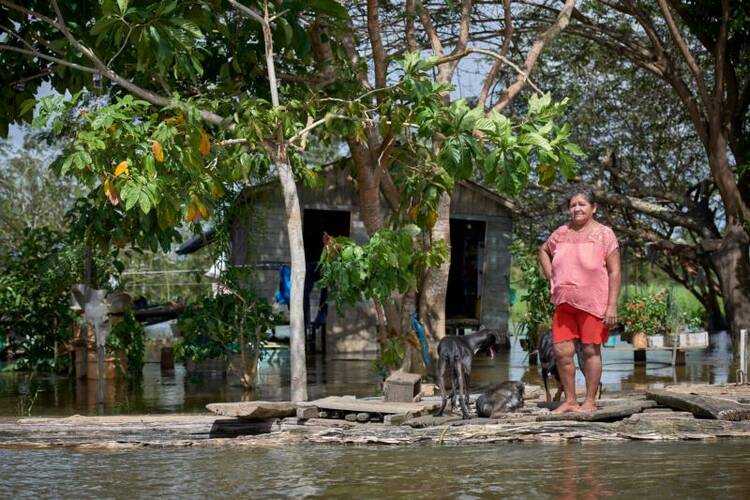 Juscelina Silva Batista, 54, stands in front of her house in the middle of the Amazon River near Santarem, Brazil, April 11, 2019. (CNS photo/Paul Jeffrey)

VATICAN CITY (CNS) -- Deforestation, land grabbing and climate change -- life-and-death issues raised at the Synod of Bishops for the Amazon -- also are wreaking havoc in Central America, Africa, Asia and the Pacific islands.

One likely outcome of the synod is a more coordinated pastoral response to those issues by church workers in every region of the world.

"We hope that the synod will put integral ecology, meaning the safeguarding of the planet, in the midst of pastoral (work)," Jesuit Father Rigobert Minani Bihuzo, coordinator of the Ecclesial Network of the Congo Basin Forest (REBAC), told Catholic News Service.

He hopes bishops will create or strengthen networks like the Pan-Amazonian Ecclesial Network (REPAM), which guided the many presynodal assemblies throughout the Amazon basin.

"We hope that the synod will put integral ecology, meaning the safeguarding of the planet, in the midst of pastoral (work)."

Although the synod has been considering "new paths for the church and for an integral ecology" in South America's Amazon basin, it has implications for the universal church. By including bishops and cardinals from India, Africa and Papua New Guinea, the synod was an opportunity to formalize collaboration in other regions as well, Father Minani Bihuzo said.

It inspired the creation of REBAC, which was organized a year later and includes Cameroon, Gabon, Equatorial Guinea, the Central African Republic, Congo and the Republic of Congo, but could expand in the future, Father Minani Bihuzo said.

A similar organization, the Mesoamerican Ecological Church Network (REEMAM) was founded for Central America and Mexico Oct. 2, just four days before the synod began at the Vatican.

Church leaders in Mesoamerica share their Amazonian counterparts' concerns about threats to forests and rivers, violence against indigenous peoples and the best way to minister to Catholic communities amid those problems, said Deacon Alirio Caceres Aguirre, who coordinates the integral ecology program for Caritas in Latin America and the Caribbean.

The Amazonian and African church networks already are working together on issues related to human rights, water quality and the impact of mining on nearby communities.

Similar efforts are underway in Asia and in the Pacific, where some islanders are already fleeing their homes to escape rising sea levels resulting from climate change.

The Amazonian and African church networks already are working together on issues related to human rights, water quality and the impact of mining on nearby communities, Father Minani Bihuzo said.

In Central America and Mexico, the church faces many of the same issues as in the Amazon, with added complications from rampant corruption and violence related to drug trafficking. Instead of a single large river basin, the area covered by the new church network includes 23 watersheds and five expanses of forest.

As in the Amazon, there are indigenous groups that are divided by national borders, and climate change is a growing concern with risks from prolonged drought and increasingly fierce hurricanes. Mining projects and hydroelectric dams also create conflicts with nearby communities, and people who defend their territories risk assassination.

In Central America and Mexico, the church faces many of the same issues as in the Amazon.

Situations described by Amazonian participants at the synod sounded familiar to Cardinal John Ribat of Port Moresby, Papua New Guinea; he said he plans to take the idea of forming a network back to bishops in the Pacific.

Indigenous peoples around the world share an "understanding that land is not owned by individuals," but belongs to a tribe or clan, he told CNS. "If something is done to the land, everyone is affected," because their culture is rooted in the land.

"That is your identity. That is your life," Cardinal Ribat said of land. "When this is taken away from you, you have lost everything (you need) to be who you are. You (become) a refugee in your own place."

He has seen that happen when companies persuade villagers to sign contracts ceding their land for oil palm plantations. Unable to read the contracts, villagers do not realize that the forest that provides their livelihood will be razed for a plantation, the cardinal said.

The Amazon synod is halfway over. Here’s what we know so far.
Luke Hansen

They may stay, trying to eke out a living between the oil palm trees. They may move to another community, he said. Often, they drift to the edges of towns that lack the public services needed for the new residents -- a pattern also seen in other regions of the world.

The violence against the environment and the people living in the Amazon described by synod participants was also familiar to Cardinal Oswald Gracias of Mumbai, India.

"The Amazon is in India also," he told journalists Oct. 23. "The problems are universal."

Even before Pope Francis issued "Laudato Si'" in 2015, bishops in Asia were calling for efforts to address climate change, he said. He expects creation of a church network to be on the agenda at a meeting of the Federation of Asian Bishops' Conferences in 2020.

Issues like climate change "have no borders," and Catholics worldwide are called to respond, Father Minani Bihuzo said. While Pope Francis has taken crucial steps by making integral ecology a pastoral issue through "Laudato Si'" and the synod, he added, it is now up to bishops' conferences to join forces to continue the work.