‘A general, a comedian and a cardinal walk into a bar’: The 2019 Al Smith dinner

‘A general, a comedian and a cardinal walk into a bar’: The 2019 Al Smith dinner 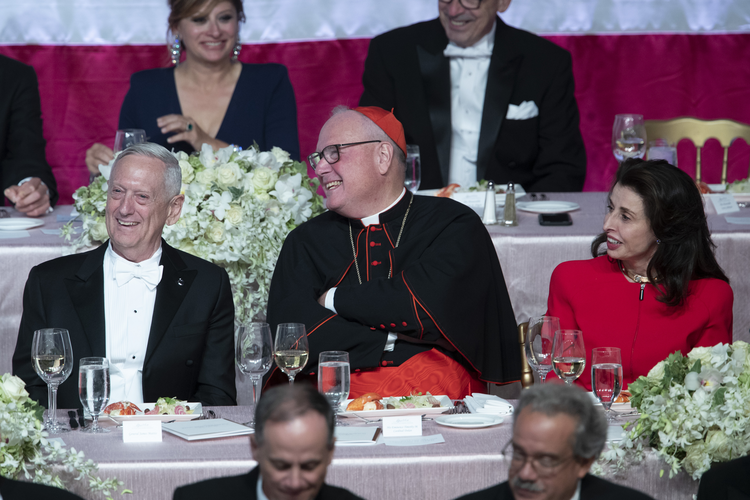 Encouraged by a robust ovation from the distinguished guests at the 2019 Al Smith dinner, General James Mattis took the podium to deliver the evening’s keynote speech. It did not take long for him to make an impression.

“[President Trump] also called Meryl Streep an overrated actress. So I guess I’m the Meryl Streep of generals,” the general said, provoking roars of laughter. The comments marked a wry shift from his previous reluctance to criticize the president publicly since stepping down as secretary of defense in December.

Mr. Mattis’s remarks came toward the end of the 74th annual Alfred E. Smith Memorial Foundation Dinner, organized each year by the Archdiocese of New York to benefit the city’s poor children by providing grants to a number of charitable organizations. This year’s dinner raised over $5.2 million, the largest amount in the event’s history for a nonelection year.

Many of the evening’s speakers, including Mr. Mattis, had some fun at the president’s expense. The overall tone of the evening was lighthearted and provided a chance for prominent business executives, church leaders and politicians to come together in friendship and charity. This unity was helped by the fact that no one was safe from the jokes of Martin Short, the master of ceremonies for the evening. Mr. Short proved to be an equal-opportunity roaster.

“Some of the most powerful elected officials in the country are here this evening,” he said. “And Bill de Blasio.” Mr. de Blasio, the mayor of New York City, was booed as he walked onto the three-tiered dais at the center of the room reserved for the most distinguished attendees. The reception was warmer for other New York politicians, including Gov. Andrew Cuomo and Senator Charles Schumer.

This year’s dinner raised over $5.2 million, the largest amount in the event’s history for a nonelection year.

Referring to the 2016 dinner, in which then-presidential candidates Donald J. Trump and Hillary Clinton delivered joint keynote addresses, Mr. Short said that “in retrospect, maybe Hillary Clinton should have skipped that dinner and gone to Wisconsin.”

“And President Trump would have been here tonight, but you know, bone spurs,” he said.

After an opening invocation from Cardinal Timothy Dolan, Mr. Short delivered his opening monologue as dinner was served to the several hundred guests gathered in the main ballroom of New York’s Midtown Hilton. Every detail of the room radiated perfection—from the white flowers at each table to the hand-steamed (trust me, I watched) 25-foot-tall American flag behind the dais. Ticket prices for the event begin at several thousand dollars, but the board of the Al Smith Foundation underwrites the cost of the dinner each year, ensuring that all $5.2 million in ticket proceeds goes to charity.

The guests seated at the dais were indeed an eclectic group, as Mary Ann Tighe observed in her remarks. Ms. Tighe is the chief executive officer of the New York tri-state region of CBRE, the largest commercial real estate services firm in the world. She received the Happy Warrior Award from the Al Smith Foundation in recognition of her service and charity.

“Where else would you find General Mattis, Martin Short and Cardinal Dolan sitting down for a meal together?”

“Where else would you find General Mattis, Martin Short and Cardinal Dolan sitting down for a meal together?” she asked. “It sounds like a bar joke: a general, a comedian and a cardinal walk into a bar. The general orders a beer, the comedian orders a cocktail, and the cardinal says, ‘Give me a pitcher of water. Trust me, I know a guy.’”

Ms. Tighe, who was educated by religious sisters and has Italian heritage, could not help but comment on the controversy surrounding a proposed statue of Mother Cabrini, especially since both Mayor de Blasio and Governor Cuomo sat only a few feet from the podium.

“Special kudos to the mayor for his push in developing low-income housing,” she said. “Someday he may even have a statue erected in his honor, perhaps right near the one for the original Italian-American to educate and house New York’s poor: Mother Cabrini.” The room erupted in applause.

Mr. Mattis took to the podium after Ms. Tighe, and, despite initial comments poking fun at Mr. Trump, his overall message stressed unity.

“America is not some finished work, nor is it a failed project. It is an ongoing experiment.”

“Great nations crumble for one of two reasons,” he said, alluding to a speech given by the 29-year-old Abraham Lincoln in 1838. The first is pressure from the outside, “which Lincoln saw as inconceivable.” The other is “corrosion from within.” This, said Mr. Mattis, is what the United States faces today.

“We have supplanted trust and empathy with suspicion and contempt,” he said.

“America is not some finished work, nor is it a failed project. It is an ongoing experiment.” Now more than ever, he said, is a time to reinforce trust in one another.

The general’s address was met with prolonged applause from the guests as the evening came to a close. Mr. Short was certainly ready for it to end.

“I left my Uber driver waiting outside,” he said, “and you know how testy Rudy Giuliani can get.”

A free country can only survive if people are willing to die for it. That is a big difference between now and then, whenever "then" was. There is a famous saying attributed wrongly to Orwell - People Sleep Peacefully in Their Beds at Night Only Because Rough Men Stand Ready to Do Violence on Their Behalf

General Mattis is still a general. Does he prefer Mr. Mattis? Most often a person of his rank is called General Mattis after retirement.

Maybe, America the magazine, will review Bill Barr's amazing speech at Notre Dame last week. So far radio silence. It was about religion and polarization and where it is coming from.

If there was any doubt to the Catholic laity that the Church leaders are pawns of globalist elite war mongers inviting Gen Mattis is proof positive. Pres Trump was 100% right to fire him.

So the Bishops that want to lecture the laity about care for poor, the marginalized, the environment and preach the Gospels and teaching of Jesus while they support the endless wars which result in the killing and starvation of millions of people, the destruction of native homelands and the creation of the world wide refugee crisis. Cardinal Dolan knows how to raise money, just follow the lead Joe Biden and sons and Hillary, let the Church become another “Clinton Foundation” and be a good boy. The good news is faithful Catholics are not paying attention to Cardinal Dolan anymore anyway

What do you mean when you say the bishops support endless wars?

General Mattis resigned, as any decent person would have.

You really need to get out more often...