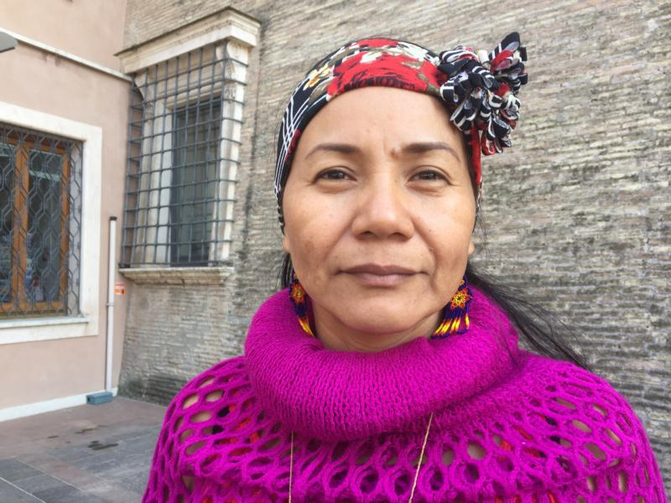 Anitalia Pijachi, a member of the Ocaina Huitoto indigenous group from Colombia and an observer at the Synod of Bishops for the Amazon, is pictured Oct. 11, 2019, near the Vatican. She said she agreed to participate in the synod to carry a message from the elders of her people to the elder of the Catholic Church, Pope Francis. (CNS photo/Barbara J. Fraser).

VATICAN CITY (CNS) -- Anitalia Pijachi, an indigenous woman from the Amazonian town of Leticia, Colombia, came to the Synod of Bishops for the Amazon bringing a message from the elders of her people to Pope Francis, an elder of the Catholic Church.

The first Europeans to arrive in the Amazon were "invaders," she said. "They never asked permission of mother nature or of the people who lived there. They imposed the cross and the Bible. That caused a great deal of resentment," and in some cases forced indigenous peoples from their territories.

But when the pope, during his 2018 visit to Peru, asked Amazonian people to tell the church how it should walk with them, "that was a question that asked permission," she told Catholic News Service.

Pijachi, an Ocaina Huitoto woman who is not Catholic, said that when she heard that, she spoke to the elders of her people, who approved of her participation in presynod gatherings as long as the church respected indigenous cultures.

"The elders said that first the Catholic Church and all churches must recognize us as having a right to our own culture and customs, our own spirituality," she added. "They must not impose themselves and change" those beliefs.

For many indigenous peoples, evangelization meant relocation from their territories to church-run communities known as reductions, as well as the loss of their languages and traditions, she said. "The pain is alive and still there."

The culture and spirituality of Amazonian indigenous people remain strong "as long as we have our territory, our rivers, our sacred places, food and our seeds, the elements of our rituals," Pijachi said.

She said she sees the synod as an opportunity to talk with "a great friend, a great elder, (Pope) Francis, who can carry our voice" to places where it otherwise would not be heard.

Environmental destruction by extractive industries such as logging, mining and oil companies has been a recurring theme in the synod.

"The people who come to extract (natural resources) don't live there," Pijachi said. "They live in Europe; they live in mansions in the big cities. All they're interested in is money."

The damage to the environment "is a spiritual death and a cultural death" for indigenous people, she said, adding that some whose actions or policies result in destruction are Catholic.

"The same person who received first Communion, who was married in the church, is the one who is cutting down the forest, who does not understand respect for creation," she said. "The same one who was baptized, who went to confession, who received Communion, who goes to Mass on Sunday is the governor of a state and pays no attention" to how public policies affect people.

"I asked (the bishops), 'Is that important to you?'" she said. Pijachi addressed the synod assembly Oct. 9.

As an indigenous woman, Pijachi said, she also called for church leaders to listen to women.

During the first days of the synod, when she heard bishops refer to the "holy mother church," the words reminded Pijachi of the "maloka," the spacious, round-sided communal building where her people gather for special occasions.

The maloka, she said, "is the woman, the womb that brings her children together, the place of abundance."

Although many synod participants spoke of the important pastoral work done by women, some remained reluctant to give women a larger role, she said. That is partly because some bishops do not understand the reality of ministry in the Amazon, she added.

A priest must administer the sacrament of the sick, for example, but where there is no priest, parents will ask a religious sister to bless a dying child. She has seen sisters telephone a priest to give the blessing by phone.

"I believe it is very important that the synod give women a place in decision-making (and) the autonomy to act," she said.

"I reminded the men that they do not have to be afraid of us," Pijachi said. "The only way a man can be born is if he comes from a woman. Before he saw the light of day, he was born through a woman's vagina."

"So why, after I gave him life, I who am his mother, why does he reject me and send me off to a corner?" she asked.

In her people's creation story, Pijachi said she told the bishops, "God put man and woman together in the world ... to walk together." If the two are not working in harmony, one indigenous elder told her, "it's like walking with only one leg."

Is not this someone saying NO to the gospel of salvation through the Cross on behalf of other people?

Stop playing games now and ordain women priests and bishops and make them cardinals and allow them to be popes. Same treatment is equal treatment and different treatment always amounts to lesser treatment and one group being diminished by the other. Treat no one any differently than you wish to be treated by them is the Golden Rule which Christ himself taught in the Gospels. Any bias allowing women to be kept excluded to sacraments men are not equally excluded from is sin and inequity.

Pope Francis: The time to get real is now! Ordain women bishops and priests now! We have plenty of already fully trained and educated women who could be literally ordained both today. Stop the Hate and Ordain Women the same as Men Now! Begin to change all sexist rules and traditions in our church immediately because they are all sinful and hateful.