Vaping-related illnesses are on the rise. Here’s how some Catholic schools are taking action.

Vaping-related illnesses are on the rise. Here’s how some Catholic schools are taking action. 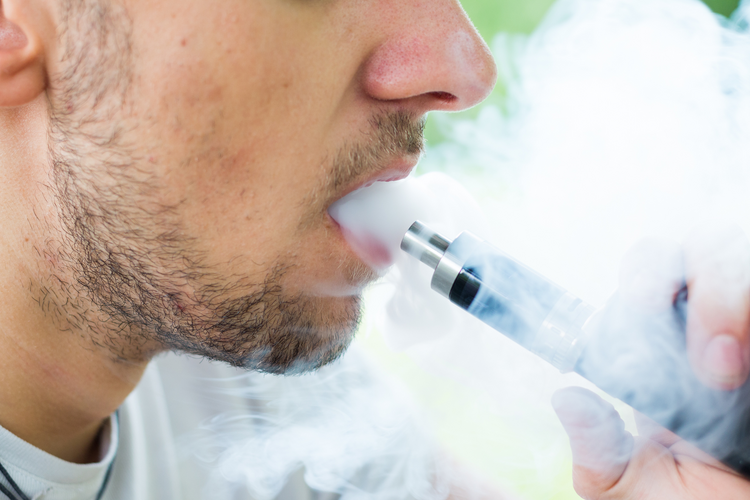 Large populations of high school parents rarely agree on anything. But it has happened at Gloucester Catholic in Gloucester City, N.J., in response to the rise of teenage vaping.

“Vaping” describes the use of a variety of e-cigarette products that may deliver flavoring, nicotine, THC (the chemical compound in marijuana that produces the “high”) or some combination of these substances, depending on the particular vaping product. Gloucester’s new policy toward vaping, which includes immediately notifying parents and requiring mandatory drug tests for those students who are caught, has been met with “almost 100 percent support from the parents” in the school community, said Tom Iacovone, the assistant principal for Student Affairs at Gloucester.

“Students view vaping as ‘below’ a cigarette [in terms of health risk.] I don’t think they realize how dangerous it is for you.”

After school administrators noticed increasing use of vaping products among students about two years ago, they decided to address the issue with more drastic disciplinary measures and have also made an effort to inform parents about the consequences of using nicotine and other drugs. The school hopes to prevent the use of vaping devices that continue to be revealed as a serious health risk.

“Students view vaping as ‘below’ a cigarette” in terms of health risk, Mr. Iacovone told America. “I don’t think they realize how dangerous it is for you.”

Vaping, especially among young people, has risen dramatically over the past few years. In a survey done by Monitoring the Future in December 2018, 37.3 percent of 12th graders reported that they had done “any vaping” in the past 12 months, compared to just 27.8 percent in 2017. This is a year-over-year increase of 34.2 percent. Statistics among 10th and eighth graders in the M.T.F. survey showed similar increases.

Given the recent influx of cases of vaping-related illnesses and deaths in the United States, this increase in vaping among young people has become a cause for serious concern. As of Oct. 8, more than 1,000 cases of lung illnesses caused by vaping have been reported across 46 states, and 22 people have died, including a 17-year-old. The majority of these reported cases involve THC use. A recent Mayo Clinic report compared vaping’s effect on the lungs to damage from chemical burns.

Not only are vaping-related illnesses on the rise, but vaping can also lead to greater chance of addiction to other substances.

The merits of reducing teen vaping are clear-cut, according to researchers: not only are vaping-related illnesses on the rise, vaping can also lead to greater chance of addiction to other substances.

“Vaping can include anything from inhaling just flavors to using these devices to administer substances like nicotine or THC,” said Dr. Nora Volkow, the director of the National Institute on Drug Abuse, in a recent video. Nicotine in particular “serves to prime your brain toward the rewarding effects of other drugs.”

However, vaping becomes a more complex issue, particularly in terms of legislation, when factoring adults into the equation. Many adults use vaping as an alternative to cigarettes, and some have questioned the benefits of legislative campaigns against vaping, concerned that it would drive many adults back to smoking.

In September the Trump administration announced its intention to ban the sale of flavored e-cigarettes. But while the legislative path to restrict vaping is unclear, many schools have taken their own steps to address the issue.

In addition to Gloucester, some other Catholic schools that have taken action include Xaverian High School in Brooklyn, N.Y., which adopted a policy that includes suspension and removal from extracurricular activities for students caught vaping. Monsignor Farrell High School in Staten Island, N.Y., installed an entire vaping-specific security system to help enforce its zero-tolerance policy. Students must swipe their ID cards to enter the restrooms, which now feature vape smoke detectors so that administrators will know who is in the restroom if the detector is triggered.

The era of the parochial school is over. Meet the Catholic educators searching for what’s next.
Betsy Shirley

Because vaping devices typically do not give off a strong odor and students can conceal them easily, it takes an intentional effort to regulate vaping in schools. That said, these schools report that the crackdown is working, as their number of vaping incidents have trended in the opposite direction of the nationwide statistics cited above.

Although public and Catholic schools alike are taking action, Mr. Iacovone argues that his school’s Catholic identity is important when trying to connect with students about the urgency and importance of this issue.

“We hold true to our mission of trying to form the entire student,” he said. “In terms of [addressing] the issue itself, I don’t know that we’re doing anything different than what a public school would do...but we are able to reach students in a different way, by bringing in their faith, their religion, into the conversation.”

My understanding is what the article is saying, the problem is not vaping but what people are putting in the vaping. It has especially encouraged teens to start vaping when they never smoked before or would have smoked. This will be tricky as theoretically it is a way to wean addicted smokers off of cigarettes.

Kevin Jackson is a Joseph A. O’Hare, S.J., fellow at America.