In the midst of climate strikes, where are the Jesuit schools? 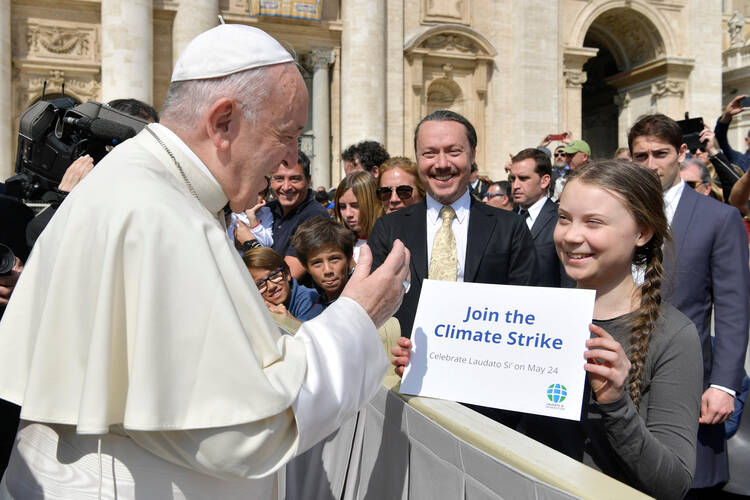 “This is the biggest crisis humanity has ever faced,” said 16-year-old Greta Thunberg in a recent conversation with the United Nations secretary general. On Sept. 18, she urged members of Congress: “Unite behind the science. And then I want you to take real action."

Bold statements like these have helped Ms. Thunberg to inspire a wave of “climate strikes” around the world in advance of the U.N. Climate Action Summit on Sept. 23 in New York City. One strike, led primarily by a coalition of youth-driven advocacy groups, will take place on Sept. 20 in cities across the United States and around the globe. Organizers have encouraged students to walk out of school and take to the streets.

“We hope to create awareness that climate change is not an issue to be deliberated about for too long,” said Aiden Swanson, 19, a sophomore at Creighton University. “It needs to be something where decisive action is taken.”

Greta Thunberg: “This is the biggest crisis humanity has ever faced”

Public school systems have had different responses to this call for action. The New York City Department of Education has taken a significant step to aid this effort by excusing student absences (with parental permission) from class on Sept. 20 to allow them to attend climate strikes around the city. Boston Public Schools have also publicly recognized the value of civic engagement for young people and will excuse students who have a note from parents. In contrast, Philadelphia’s school system has said that students will not be excused to attend a strike.

Among the demands of the strikers are a government-led divestment from fossil fuels, protection and restoration of the world’s biodiversity, and justice for the poor and vulnerable most at risk because of climate change.

The strikes have particular relevance for Catholics. Pope Francis has made responding to climate change a central focus of his papacy, as initially outlined in his 2015 environmental encyclical, “Laudato Si’.” A Sept. 19 statement from CIDSE, an umbrella group of Catholic aid agencies from Europe and North America, says that governments have a “moral duty” to take immediate action to combat climate change.

To encourage the participation of young people in the strikes, the Ignatian Solidarity Network has connected the goals of the climate strikes to the recent promulgation of the Universal Apostolic Preferences of the Society of Jesus, two of which are “to accompany young people in the creation of a hope-filled future” and “to collaborate in the care of our Common Home.”

“As people of faith, we have a moral obligation to address climate change because of the inherent dignity of all of creation.”

“The call to action of the youth-led climate strikes is particularly relevant for Jesuit institutions,” said Brenna Davis, the director of environmental initiatives for I.S.N., in a statement to America. “The global climate strikes provide an educational moment within the context of world events, and we believe it is important to mark the day, using Ignatian spirituality and pedagogy as the frame for our participation.”

“As people of faith, we have a moral obligation to address climate change because of the inherent dignity of all of creation,” Ms. Davis said.

Administrators at Jesuit universities and high schools have had mixed responses to the climate strike. Paul Hogan, the principal of Jesuit High School in Portland, Ore., said that the school “recognizes that this a student-driven event, and we believe it’s in line with the church and the Society’s Universal Apostolic Preferences.” Students will be allowed to leave school with parental permission. Xavier High School in New York City will have a similar attendance policy. Both schools left the decision to strike in the hands of individual students and parents.

Several Jesuit schools contacted about the strikes were not aware that they were taking place, raising the question of what, if any, obligation Jesuit schools have to inform their students about these types of events.

Many students at Jesuit schools are taking action on a smaller scale. The Creighton Climate Movement, a group of over 400 students at Creighton University in Omaha, Neb., is actively involved with environmental advocacy. Mr. Swanson, a member of the group, will speak at the local Omaha climate strike on Sept. 20.

“Creighton’s Jesuit mission and subsequently a commitment to the environment is integral [to the group’s mission],” said Mr. Swanson. He feels that Jesuit schools especially have a “moral imperative to protect those vulnerable from climate change.”

The group’s specific focus is moving away from fossil fuels—also one of the goals of the nationwide Sept. 20 strike—in the local community and on Creighton’s own campus.

Student groups like these challenge Jesuit schools’ practice of environmental responsibility. Among the schools mentioned previously, Portland Jesuit, in particular, noted its commitment to implementing some of I.S.N.’s carbon emissions guidelines, but participation in these optional initiatives is not universal among Jesuit schools.

In school I hope. A satire headline this morning

Exploiting children comes up as a political tactic.

Catholic school administrators must exercise due diligence.
More and more evidence from experienced scientists is being censored and suppressed while the political organisation IPCC with a commission to ONLY prove that human caused global warming is a crisis dominates the mainstream media.

There are clear alternatives - global cooling heralded by the disappearence of sunspot activity or global heating by the sole factor of carbon dioxide emissions by human civilisation.

Preparing for one when the other arrives WILL be catastrophic.