Archbishop Gregory at Red Mass: Justice is ‘a divine characteristic’ 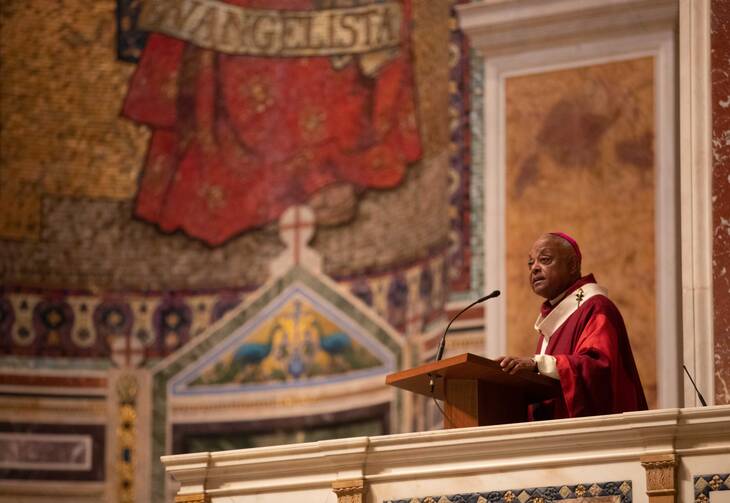 WASHINGTON (CNS) -- Addressing a congregation that included Supreme Court justices and law students attending the Oct. 6 Red Mass at the Cathedral of St. Matthew the Apostle in Washington, Archbishop Wilton D. Gregory encouraged those involved in law to reflect God's justice and mercy.

"Justice is a divine characteristic of God himself. Whether we are Christian, Jewish or Muslim in heritage -- we all believe that God is perfectly just and always merciful," Washington's archbishop said. "And those of you engaged in the administration of justice can and must never completely remove those divine qualities from your service and your calling."

The annual Mass, traditionally held on the Sunday before the Supreme Court opens its term on the first Monday of October, invokes God's blessings and guidance on those responsible for the administration of justice as well as on all public officials.

Archbishop Gregory noted, "We pray for all of the members of the judiciary and legal world because yours is the tremendous responsibility of attempting to reflect God's perfect justice and mercy in interpreting the laws of our nation and for all those who will come before you during this next year."

Those affected by the administration of justice, he added, include those who may have committed crimes, and "those whose language, culture, race, or religion are not your own, as well as those who are at precarious moment on the spectrum of human life."

"Justice is a divine characteristic of God himself. Whether we are Christian, Jewish or Muslim in heritage—we all believe that God is perfectly just and always merciful."

"None of them are unimportant and all of them approach you for what they hope will be a sign and an expression of God's truth," he added.

"We begin another judicial season asking for a generous outpouring of God's Holy Spirit upon all who serve us in the realm of our legal structures," the archbishop said. "May each one of you rejoice in a spirit of integrity, courage and wisdom each day of this new year of legal justice and human compassion."

Archbishop Gregory: "Every court in the United States remains an enduring and irreplaceable manifestation of our freedom as a nation and as a people."

Archbishop Gregory added, "We begin a new judicial season always filled with hope that honesty and integrity will prevail and that the laws of our nation will be properly applied and observed. Those who work in the legal world carry a heavy burden and you must constantly work relentlessly to ensure that truth and fairness are not denied to any plaintiff or defendant."

The 67th annual Red Mass in the nation's capital was sponsored by the John Carroll Society, a group of 1,000 lay men and women in the Archdiocese of Washington from a variety of professions who participate in religious, charitable and social activities.

Archbishop Gregory said he was pleased to celebrate this year's Red Mass as the new archbishop of Washington. He was installed in May.

He first preached at the Red Mass in Washington in 2002 when, as bishop of Belleville, Illinois, he was president of the U.S. Conference of Catholic Bishops. He preached at the Mass in 2015 as archbishop of Atlanta.

"New beginnings are always good for the soul," Archbishop Gregory said. "Each year at this time, the legal world opens a new judicial session and that also should inspire us to give thanks for the gift of this particular component of our freedom that is captured and operative in the courts of our land and in the opportunity to pursue justice as a legitimate expression of our freedom and hope."

"We pray for all of the members of the judiciary and legal world because yours is the tremendous responsibility of attempting to reflect God's perfect justice and mercy in interpreting the laws of our nation and for all those who will come before you."

Praising the important role of the judicial branch, the archbishop noted, "Every court in the United States remains an enduring and irreplaceable manifestation of our freedom as a nation and as a people.

"Distinct from the legislative or executive branches of our government, your enduring value is primarily to be found in your careful and balanced pursuit and impartial application of the twin virtues of justice and mercy under the laws of our country."

Archbishop Gregory noted that the artistic representations of justice adorning modern court buildings reflect the ideals of that work.

"The statue of a woman wearing a blindfold and often holding an ageless balancing scale is a frequent and apt symbol of what justice must be for all of us -- evenhanded and without bias and prudent in attempting carefully to weigh all sides of an issue," he said.

That figure, he added, seemingly "declines to be concerned about or even take notice of the appearance of wealth, age, gender or power -- she only mulls over the merits of the issues that she carefully balances on her scales of justice."

Concluding his homily, Archbishop Gregory prayed: "May this new judicial season bring you increased wisdom and prudent judgments. May this new legal calendar bring our nation a boundless new hope and confidence in our freedom as a people. And may God be glorified in all that you do in all the myriad courts and legal corridors of our land in attempting to reflect his always more perfect justice and mercy."

Why a repeal of the 2nd Amendment would not be enough to stop gun violence
Ellen K. Boegel

The 13 priests concelebrating included Msgr. Peter Vaghi, chaplain of the John Carroll Society and pastor of the Church of the Little Flower in Bethesda, Maryland; Msgr. W. Ronald Jameson, the cathedral's rector; and Msgr. John Enzler, president and CEO of Catholic Charities of the Archdiocese of Washington.

This year's Red Mass was celebrated 40 years to the day after St. John Paul II celebrated Mass at the cathedral Oct. 6, 1979, during his papal visit to Washington.

The Lord hears the cry of the poor.