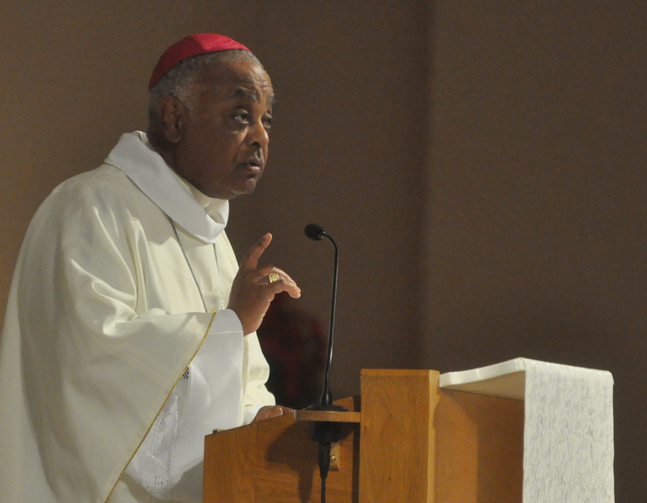 Archbishop Wilton D. Gregory of Atlanta said a legislative proposal called the Hidden Predator Act, or H.B. 605, is unfair to the Catholic Church and would be catastrophic to the church's mission. Georgia lawmakers are considering waiving the statutes of limitations for filing civil lawsuits over abuse of young people against nonprofits and businesses, but not government agencies or public schools. (CNS photo/Sean Gallagher, The Criterion)

HYATTSVILLE, Md. (CNS) -- Archbishop Wilton D. Gregory will have a lot of things on his plate when he becomes the newest leader of the influential archdiocese situated in the nation's capital: the sexual abuse roiling the Catholic Church, the tense political climate on the Hill and the challenges that come with learning about a new archdiocese.

The newest archbishop of Washington knows what his first priority will be however.

The "first and most important thing" is "getting out in the field and meeting the people," Archbishop Gregory told Catholic News Service in a May 17 interview.

He has six listening sessions scheduled with priests of the Washington Archdiocese, and "I'm trying to fill up my calendar right now with moments when I can be in the parishes with the people," he said. Like "a Sunday supply priest," he wants to visit local parishes to say Mass and afterward stand at the back of church and greet people.

Archbishop Gregory has "no fancy requirements" for such visits, nor would he expect any "fancy preparation." He just has "the real desire to be there as a listener," he said, adding that "it is that casual encounter with people that often proves to be the most fruitful."

"I've discovered the best approach to learning about a diocese is to listen to the diocese so you don't go in with all kinds of preprogrammed intentions that may or may not fit the experience of the people or their needs," said the 71-year-old prelate, who will be installed as Washington's seventh archbishop May 21 at the Basilica of the National Shrine of the Immaculate Conception.

When Pope Francis appointed him to Washington April 5, he had been Atlanta's archbishop for 14 years. Before that, the Chicago native was bishop of Belleville, Illinois; he was a Chicago auxiliary bishop when he was named to head that diocese.

In Washington, he succeeds Cardinal Donald W. Wuerl, who had headed the archdiocese for 12 years until his retirement last October.

In an interview with CNS at the Archdiocese Pastoral Center in Hyattesville, just outside the District of Columbia, Archbishop Gregory covered a wide range of topics.

He talked about bringing hope and healing to Catholics coping with the clergy abuse scandal; how his new duties include speaking for the church "to the powers that be" in the nation's capital when the times call for it; the significance of his appointment as the first African American archbishop to head an archdiocese with "a storied history of African American Catholics going back to pre-nationhood"; what he'll miss most about his former archdiocese; and a few of his side interests, like cooking and golfing.

Archbishop Gregory said the abuse scandal erupting again in the church over the last year is "chapter two" of what the church went through in 2002. He was bishop of Belleville at the time and president of the U.S. Conference of Catholic Bishops and was involved in the drafting and the implementation of the bishops' "Charter for the Protection of Children and Young People."

"The dynamic then was the scandal that people were experiencing and voicing, that clergymen, priests, deacons, church officials had harmed their children," he said.

"Chapter two is the revelation that those in leadership too frequently did not address those issues appropriately and in a very few cases, some of the leaders themselves were engaged in that behavior," Archbishop Gregory said.

There is "anger at the failure of leadership," he said, "and from my perspective that's more problematic, because now you're looking at the very authorities that have been asked to guide and govern and teach and sanctify the church, and they themselves either did not handle those case well or even worse were a part of that."

"The two moments are related, but they are distinct," Archbishop Gregory said. "It seems to me that the task that lies before me is to both listen to the people -- to hear them, to hear the hurt, acknowledge it, recognize it, but then also to invite them to reach into their own spiritual treasuries and to say now we can't allow our history to determine our future and to invite them with me to chart a new direction and engage them."

Archbishop Gregory said he is hopeful the U.S. bishops, when they meet in June in Baltimore, will build on Pope Francis' "motu proprio" issued May 9 giving clear direction to the global Catholic Church about reporting abuse and holding church leaders accountable.

Last November, during the fail general assembly, the Vatican had asked the U.S. bishops to postpone a vote on to implementing new protocols to boost the accountability of bishops to laypeople and survivors of clergy sex abuse.

In June, the bishops can go forward with those protocols, he believes, putting "into place structures and procedures that will be a resolve and a direction for the future. Those procedures also have to include lay involvement, lay engagement in a similar way to what the charter did in establishing lay review boards."

"These steps will go a long way to bringing some healing" from the abuse crisis, Archbishop Gregory remarked. "But also I have to stand in the presence of these people of the archdiocese before God and ask their pardon."

He added, "There's a family I am still very close to from Belleville, and the wife, who knows me well, once said, 'You know Wilton, when a married man has made a terrible mistake he can never say, "I'm sorry enough,"' and I think that analogy is also appropriate to this moment."

The abuse crisis has "broken the hearts of many of our priests," Archbishop Gregory said, "because here they are in the trenches working hard and doing the best they can, trying to make 'bricks with no straw' and this is then dropped in their laps and that's hurt them."

In Washington, he said his listening sessions with the priests of the archdiocese will "lay the foundation of a relationship that I want to build" with them.

With regard to him being Washington's first African American archbishop, he said he knows that for many African American Catholics, his appointment "is a great source of pride, and I am honored those feelings are there."

"I look forward to encountering the African American Catholic community as one of their sons who has now become their shepherd," he added.

"I'm very much aware the Archdiocese of Washington has a storied history of African American Catholics going back to pre-nationhood. There's a sacred heritage that I hope to both recognize and to honor," he commented.

Archbishop Gregory also observed that our nation is at a moment "where the ugly presence of racism has come to the fore again -- and I say 'come to the fore' because some of the problems and some of the attitudes that have now gotten media attention obviously have been there latently and but now they have come to the surface again."

"I hope that in my ministry as an African American archbishop, I can invite people of all races and cultures and traditions (to) be church together," he said, adding that "we are best ... when we are together."

What he will miss most of all about the Archdiocese of Atlanta are the people -- priests, deacons, religious sisters and the laity. "Every church enjoys its greatest treasure in its people," he said.

The people there has been "so generous and gracious and loving to me -- they became family," he added.

As he makes the transition to the Archdiocese of Washington -- at least one thing will be different: He will not be able to drive himself anywhere. He must have a driver, he explained, because the archdiocese "is a corporation sole for legal protection."

This "is going to be a real challenge for me because I am an independent soul. ... That's limiting (but) we will get through."

He is a sports fan. In whatever spare time he may have, sports is one of the three things he watches on television, along with news and nature shows. And speaking of sports, he feels that as the bishop of the local church, "I've got to root for the local team," so when it comes to baseball, now he'll be rooting for the Washington Nationals.

He likes to play golf -- or "tries" to play golf, but spending time in the kitchen and making a meal, "that's relaxing for me."

"Part of the job" of a bishop is attending a lot of formal dinners and banquets, Archbishop Gregory said, "but when I'm home I like to put on casual clothes and go into the kitchen and bang the pots" and make a meal.